(Find this description concerning the "above" and "down" amazing? Look at it on your map to tell me the direction through the form and I'll tell you where you are?)

It is also written Sciathos and Sciathus. In this area, Kastro Peninsula has presence in history in the 14th century as it was a natural fortress against the invaders.

Here is everything about Skiathos, the beautiful Sporades island, along with links to other 100 beautiful Aegean Islands to find great saving on travel charters including hotels.

The feature of the surface of the island consists of amazing wooded landscape of Aleppo Pine and stone pine forest at the Koukouaries, a lagoon beside the airport and farms around all of the major settlements on the island, where hundreds of people live.

Travelers get to it for its sun, beautiful nature, sandy beaches and among them secluded beaches, nightclubs, hill top tavernas with picturesque views and picturesque monasteries.

Other features of natural beauty include the slopes in the southeast and southwest, where most of the settlements and facilities are located, in addition to the inlets, capes and peninsulas at the coastal areas and the island's connection with beautiful islands and islets nearby. 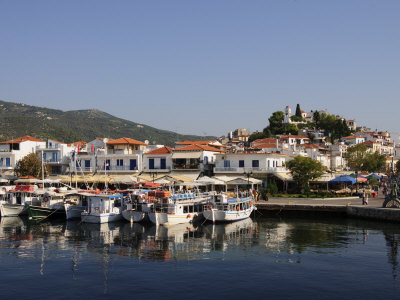 At the northwest of the Aegean Sea, the beautiful Skiathos Island is about 50 square kilometers in size, but it has several tens of sandy beaches all over the coastal areas of the island. See Skiathos Beautiful Beaches here.

In addition, it is beautiful for street walking and horse riding to enjoy the nature of the island, and mountain biking, scuba diving and other water sports.

It is for many reasons that the beautiful Skiathos Island considered the cosmopolitan island among the beautiful Greek Islands in the Sporades and thus being busy by traveling charters from north Europe to Skiathos small airport at the north east of the capital, Skiathos.

The airport, which takes the name of Alexandros Papadiamantis and it was built after resolving the terrain and joining Skiathos with the small island of Lazareta to make the ground of the airport suitable, so there a lagoon in the airport area.

The airport is a small and it  has narrow and short run way, so some flights stop at other airports including Thessaloniki to refuel.

Charter flights come directly from northern Europe to the airport in the beautiful Skiathos. But, some travelers also come from the mainland, other parts of Europe, especially the countries nearby.

Others come from Turkey and other parts of Asia through the airports of the mainland and then take flights to Skiathos airport, or the ferries to the beautiful Skiathos Island and the nearby islands.

From the European countries nearby, travelers get to Volo to take the ferries to Skiathos. Ferries also rum from Skiathos to Agios Konstantinos and the beautiful Alonissos Island via Skopelos.

In summer, as the air and sea traffic increase to the beautiful Skiathos Island, hydrofoils and jet ferries run to Alonnisos, Agios Konstantinos, Glossa, the beautiful Skopelos Island and Thessaloniki.

The ferries run daily during the tourism season between June and September.

The boats take you also to places only accessible by boats, such as Cape Kastro, Galazia, Halkini Caves, Lalaria Beach, Skotini and the islets of Tsougria and Tsougiaki, where you can enjoy snorkeling and swimming.

In addition to the external transport, the internal transport is running well enough by the island's bus, rental car, motorcycle, taxi and water taxi. The bus takes from Skiathos Town to other parts, including the beaches every half an hour and they are always crowded in the hot season.

The touristic authorities and some businesses have found the grounds to invest in the touristic euphoria, the beautiful Skiathos Island receives and maintain the necessary infrastructure.

Therefore, the prices of Skiathos traveling packages, whether exclusive, or inclusive hotels soar in July and August.

The Capital of the Beautiful Skiathos Island!

The beautiful Skiathos Town is the capital city and the port. It lies at the southeast coast and is the main settlement where the majority of the population live.

There are more than 4,988 people living in the town out of more than 6,200 people in the entire Skiathos beautiful Island.

From here to the south you find many villas ready for holidays and hotels and sandy beaches with pine trees are at the south coast. The exception is the coast at the north, as it is precipitous with rugged terrain where Mount Karafiltzanaka rises and somehow less accessible.

The Municipality of Skiathos includes some islets such as Arkos, Aspronisi, Maragos, Troulonisi, Tsougria and Tsougriaki and they are visible at a few kilometers at the southeast coast.

The red roofed and white washed houses of the beautiful Skiathos are built on two low peaks overlooking through the waterfront the Islet of Bourtzi, which lies between two small harbors and connected to the city by a short causeway.

As major tourist center, the island and its name-taken town has bars on the water front and the narrow Papadiamanti Street, galleries, hotels, shops, tavernas and travel agencies.

The quay is at the middle of the waterfront north of Bourtzi Islet. Right of it is a small boat harbor and left of it is the old fishermen's harbor.

Trion Ierarhon Square (Platteia) with outdoors tables, where locals gather and music plays sometimes is above the old harbor. The bus terminal is at the north of the new harbor.

The Museum is on the same main street and it exhibits a collection of books, paintings and photos. The museum is prepared in the house of the national island's writer and the Greek novelist and short story writer Alexandros Papadiamantis to to celebrate his memory.

His name was given to the main street too. As a national writer, Alexandros Papadiamantis wrote featuring the hard daily struggle of the nationals during the 19th century in which he took great part of it sharing the daily had living conditions as an islander.

In addition to the beautiful Skiathos Island, you may also be interested in the following Greek Islands:

Share the beautiful Skiathos Island with your social media and the other services through the small buttons on the page.

Do you know more about the beautiful Skiathos Island?

Use the comments form below to write about the beautiful Skiathos Island and upload beautiful photos from it. Thanks.

Comments and new articles about the beautiful Skiathos Island appear at the second section of the page above these lines.