Zahara de la Sierra is a beautiful small white Spanish town in the Cadiz Province, which is one of eight provinces in Andalucia at the south of Spain.

The white Spanish town lies at the centre of Calle San Juan on the top of one of the mountains in Andalusia.

The following brief article is about Zahara de la Sierra in Andalusia, Spain and the surroundings.

If you have more information about it, please write it through the form at the bottom so the readers could read about Zahara dela Sierra from different perspectives. I will reward you for that by some e-books as gifts. Thanks. 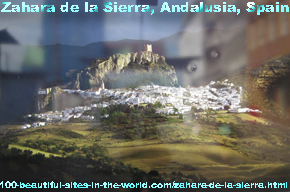 Zahara de la Sierra is at the north of the ruins of the Moorish Castle, which was built in the Middle Ages and it takes about 2 hours to reach it from the city of Cadiz, the capital of the Cadiz Province.

It is one of Andalusia's famous "Pueblos Blancos" or "white" cities, because of its houses and other buildings, surrounded by lush green fields and olive groves.

Along the streets are palm trees, bougainvillea and orange trees. The castle is from the 12th century and it is at the highest area of the village. It takes about 15 minutes to climb to it.

The town dresses in white like a bride in her wedding day, or perhaps the white is an open color to symbolize the virginity of its beautiful women and the nature in the white town and the surroundings.

The Moorish Castle as one of the historical locations in the area was built in the eighth century around the year 742 and rebuilt again in the fourteenth century.

The near surrounded area is also including Gibraltar, a strategic location southern of the Iberian Peninsula, which lies between the Mediterranean Sea and the Atlantic Ocean.

The Iberian Peninsula itself includes Spain, Portugal, Andorra and the self-governing British Crown colony of Gibraltar.

The small white town of Zahara de la Sierra overlooks beautiful gardens and a lake made by people. The white town seems very beautiful place among 43 towns in Cadiz province up the valley where they built a sight-catching dame.

The town is still keeping its epic name from the Arabic word "Zahara". It is located not so far from other historical places in Spain that flavorous with enduring beauty and historical and cultural stories.

Among those places are Ronda, Granada, Alhamra Palace or Alhambra Palace, which is originally a castle built by Muslims during their rule in Spain called Moor and referred to people from north west Africa, certainly Moroccans.

The entire Andalucia was taken by the Muslims after the invasion of Tariq ibn-Ziyad in 711 and remained under this influence until the 15th century. However, there were coexistence of Muslims, Christians and Jews in the 10th century in Cordoba.

Despite this historical fact, the Islamic civilization existed longer in Andalusia than any other culture on the Iberian Peninsula. The name of Andalusia or Andalucia came from the Arabic name Al-Andalus.

Abu al-Hassan of Granada recaptured the castle in 1481. The castle remained on his hands until the fall of Granada few years after. Cordoba was taken in the 11th century and Seville followed in the 13th century.

In addition to the beautiful gardens in the place that were once symbols to the flourish of the Arabic poetry, there are some beautiful places such as Grazalema National Park and Lake Zahara El Gastor.

Olives are the main agricultural crop in the southern Spanish region covering 1.6 million hectares of land scattered around the valleys and on hillsides in the mountainous landscape.

Forests and mountains have a rich plant and animal life with a wide range of rare species. People have lived in the area since the dawn of recorded history. It shows the famous prehistoric cave paintings at La Pileta.

As a consequence of global climate change, it is expected that the annual rainfall in southern Spain will fall by as much as 40%, while it is predicted that average temperatures will rise by up to 4º C at the end of the century.

This will expose Andalusia and other parts of the Iberian Peninsula to a serious risk of desertification.

Olive trees may disappear, green pastures may change to bare deserts, and the basis for an agricultural production may severely be reduced.

The castle at the top of the town was originally a Moorish outpost, overlooking the valley. Due to its position between Ronda and Seville, it was a perfect site for a castle to be built to serve as a fortress in case of attack.

The remains of the Moorish castle still exist and can be visited free. There are a few small hotels and hostels, along with many restaurants and an English-speaking tourist office.

The Rough Guide to Andalucia!

The Rough Guide to Andalusia is the definitive travel guide to the best attractions Andalusia has to offer.

Whether you wish to explore the vibrant regions of Andalusia, taste the flavours of Andalusia's cuisine or discover the enchanting Alhambra palace and the White Town of Ronda; the Rough Guide to Andalusia has expert advice on what to see and do in Andalusia.

Full-colour features explore the Semana Santa Holy Week and Moorish Andalusia; with comprehensive coverage on Andalusia's history, attractions and the unique flora and fauna of this stunning region.

Fully updated and expanded, this guide combines up-to-date descriptions of the best hotels and hostels in Andalusia, the best restaurants and tapas bars in Andalusia and entertainment to cater for all budgets.

Explore all corners of Andalusia's varied landscapes with expert tips for outdoor activities, from rock climbing and hiking to kite surfing and mountain biking and the clearest maps of any guide.

Gypsies and Flamenco: The Emergence of the Art of Flamenco in Andalusia

This definitive work on the contribution of the Gypsies to the development of flamenco traces their influences on music, from their long migration from India, through Iran, Turkey, Greece, and Hungary, to their persecution in Spain.

This new updated edition provides fuller explanation of some of the technical terms and an invaluable biographical dictionary of 200 of the foremost Gypsy flamenco artists from its origins to the present day, as well as a discography and videography.

Gypsies and Flamenco: The Emergence of the Art of Flamenco in Andalusia, Interface Collection Volume 6

You can either comment on this article about Zahara de la Sierra, the White Town in Andalucia, Spain, or write your own.

To do so, please use the following form and contribute to this page. It is good idea to leave your email address so you can receive replies to your comments.

I have some gifts for you too for sharing your words about any beautiful locations and tourists attractions in Zahara de la Sierra, the White Town in Andalucia, Spain, and the affects of global warming on those locations. Thanks.

Comments on Zahara de la Sierra appear on the second section of the page, when you or other visitors enter them and submit the form.


You can also enjoy more activities here if you liked this page about Zahara de la Sierra, the White Town in Andalucia, Spain. Please share it with your services through the small buttons on this page.

This could be also additional value to you, as you could experience some social networking technologies and know more. Click on "Enjoy this page? Please pay it forward" at the bottom to know how to link to Zahara de la Sierra.

I use "Solo Build It" tools at the bar below to empower this page about Zahara de la Sierra, the White Town in Andalusia, Spain and the entire 100 Beautiful Sites in the World. Thanks to those strong website building and optimizing tools.