Have You Seen the Beautiful Santiago City?

Some cities such as the beautiful Santiago City have many beautiful places that interest the visitor. However, Santiago might not be that wonderful city with marvellous beauty to some people.

If you had any objection, or perhaps if you loved it, bring that on through the comment form. Thanks. Here is brief information about the city and some beautiful places in Santiago. 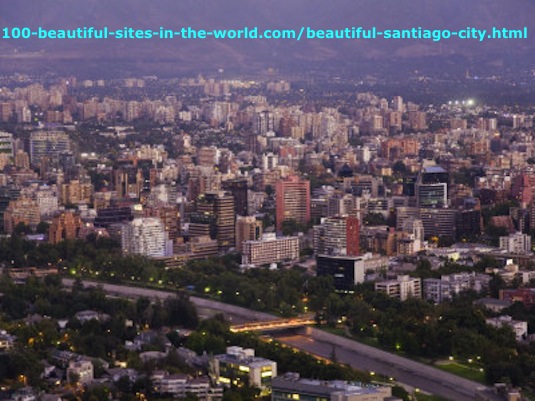 The beautiful Santiago City or Santiago de Chile is the capital city and the economic centre of Chile. It is the fifth largest city in Latin America.

The city has steady economic growth that has transformed it into one of the most modern metropolitan areas in Latin America, where the city lives extensive suburban development in many modern shopping centers, impressive high rising building with the most beautiful architecture and the ground laid infrastructure.

One of the impressive infrastructures appears in the transport, including the steadily growing underground Santiago Metro, whereas the beautiful Santiago City is connected interiorly to beautiful cities and towns and exteriorly to other cities in the world.

The city continued to grow since the date the Spanish conquistador, Pedro de Valdivia founded it in 12 February 1541 and reached now about 641 square kilometers.

The beautiful City of Santiago lies in the central valley of the country, a little down between the central western coast and the cordillera in South America.

Pedro de Valdivia called it Santiago de la Nueva Extremadura and became the first royal governor of Chile. The main river, Mapocho runs through the beautiful Santiago City, dividing it into two sides and then connecting between these sides.

Chile is one of the beautiful countries in Latin America. It stretches about 756,950 square kilometres from the central western coast of South America to the south of it. Peru borders it at the north, Bolivia at the northeast, Argentina at the east and the South Pacific Ocean at the west.

There are more than 17,094,270 residents in Chile. About 89% of the populations live in the urban areas in the centres of the country.

Out of the population, more than 4,970,000 Chileans live in the beautiful Santiago City. However, many of the residents practice escaping from the pollution, every time and then and that makes non-stable figure of populations in the greater Santiago de Chile.

The Commune of Santiago is the administrative division and the Centro of the beautiful Santiago City as well. It is in the centre of Santiago Province and is full of commercial centres and shopping malls, some universities and government buildings.

Most of those buildings are in a triangle surrounded by Parque Forestal and Rio Mapocho at the north, the Alameda or Av del Libertador General Bernardo O'Higgins at the south and the Via Norte Sur at the west.

The Plaza de Armas is the historic centre of the beautiful Santiago City and there are many classical and colonial buildings in this center. People knew it in the past, when it was a hillside camp, as Santiago del Nuevo Extremo.

The buildings in the beautiful City of Santiago include the town hall, the post office, the museums, the cathedral and some restaurants, shops and snacks hot-dog at the eastern and southern edges of the plaza. The civic buildings continue to the west of the plaza.

The Plaza Baquedano or as known locally as, Plaza Italia is in the triangle. The Av del Libertador General Bernardo O'Higgins intersects at the triangle with Av Vicuna Mackenna and from that point on it is known as Av Providencia and it takes two other names further to the east, such as Av Apoquindo and Av Las Condes.

The metro linea 1 follows the main axis from the areas down of the coast up to the areas at the foot of the mountain.

Barrio Santa Lucia, Barrio Lastarria or Cerro Santa Lucia is one of the beautiful parks in beautiful Santiago City. It lies between Plaza Baquedano and Plaza de Armas, overlooking Alameda.

There are restaurants, bars and bookshops in this plaza. Barrio Paris Londres is a quarter at the south of Alameda and there are medieval buildings and winding cobblestone streets.

Barrio Bellavista is an area near Mapocho and below Cerro San Cristobal. There are some restaurants and bars here offering pleasant moments to eat, drink and chat at night.

Near it, on the Recoleta area, there are additional restaurants offering Middle Eastern food.

The ways crossing the river lead to Providencia, another lively area of the greater and beautiful Santiago City. The main street is given the same name and is full of fast food and shops on the two sides of the street.

Some trees giving this area a green beautiful view line some of the streets here. There is a nightlife zone near this area here called Suecia.

Barrio Brasil is a busy place in a modern area across the river with new buildings from the 20th century. The development runs continuously in this area and the students fill it regularly, including budget residential apartments. The main square in the beautiful Santiago City is Plaza Brasil, which becomes vivid in the weekends.

There is a place here near Barrio Brasil and Alameda called Concha y Toro. Cobblestone streets wind through it and there are some old buildings.

The green Parque Quinta Normal and Parque O'Higgins are at the west and the south of this area and both of them are good places for families to relax on the weekends.

In addition to the beautiful Santiago City, you may be interested in the following Latino beautiful places and other things in between:

Like, tweet, share, follow, or pin the pictures on the beautiful Santiago City. If you live there, or if you knew more about the capital city of Chile, please use the following comments form to write about it and upload pictures from it. Thanks.

Known as travel writer as well, the actor Andrew McCarthy wrote inspiring and guiding tips to 400 beautiful destinations in the world, including the beautiful Santiago City. He said those are the best of the world destinations.

The idyllic destinations he wrote about in his book get travelers in the know to start with the ancient wonderful sites, the mountaintop villages, the beautiful coastal towns, the wonderful islands and the pristine lakes.

The beautiful Santiago City, Chile's capital and its largest and most important city experienced rapid urbanization, industrialization, and administrative expansion along with a massive internal migration that had significant social and economic consequences for the city, since 1891.

See other books about the country on different topics at the link above. Read about the Politics and Urban Growth in Santiago. It covers the urbanization development from 1891 to 1941 in the beautiful Santiago City. It is the first study to focus on this important period in Santiago's history.

Drawing on a wide range of original research, the book describes the growth of the beautiful Santiago City, both demographically and physically, and highlights the role of the local administration in this process.

Chile has often drawn attention to itself for its wholly implausible shape. In the atlas, the country's outline strikes you as aberrant and fantastical: almost 4000km in length (the equivalent of Scotland to Nigeria), and with an average width of just 180km, the very idea of it seems absurd.

When you get on the Chilean soil, however, these boundaries make perfect sense, and you quickly realize that Chile is a geographically self-contained unit.

The Andes, the great mountain range that forms its eastern border, is a formidable barrier of rock and ice that cuts the country off from Argentina and Bolivia.

The Atacama Desert, a thousand-kilometre stretch of parched wasteland separates it from Peru to the north. To the west, only a few islands dotted in the Pacific Ocean break the waves that roll onto Chile's coast from Australasia.

Get married with Chilean marriage celebrations and do not forget to invite us to your marriage, or send us your marriage photos and videos, so we could take some Chilean cheers for your health and that of yours!

Comments on the BEAUTIFUL SANTIAGO CITY appear at the second section of the page below the comments form and above this paragraph. If you have not commented, or written about the beautiful Santiago City yet, please do that now and receive some useful gifts.