Herschel Island is a small Arctic island that lies about 5 kilometres off the mainland in the northwestern part of Canada, near the border with Alaska in that part of the Arctic Ocean called the Beaufort Sea.

Sir John Franklin reached the island in 1826 and named it after his friend's scientist Sir John Herschel name. At that period of exploration starting from 1725 through 1893, 1909, 1911 and 1969, many expeditions reached areas on the Arctic Ocean, the Bering Sea, and Ross Ice Shelf.

The following article is about Herschel Island, Pauline Cove and the indigenous Inuit people. If you have more information about any of them, please share it through the form on this page. I have some useful gifts for you and other people who use that form to contribute to this page. Thanks. 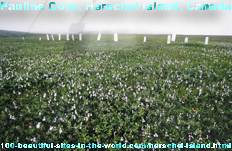 The island is home to over 200 plant species and tundra flowers such as Arctic lupines, forget-me-nots, vetches and arnicas.

In this Arctic wilderness, you will find traces of some of the very first people who settled during the old times in Northwest America.

Among those people are the Inuvialuit indigenous people or as called Inuit people meaning the real people. They could perhaps be branch of the Eskimo people. They have their own three Inuvialuktun dialects.

The Inuvialuit who lived in Herschel Island has used the island for several thousand years, working mainly as whale hunters and one can still see many of their old huts.

At Pauline Cove, a protective harbour on the east side of the island is the well-preserved remains of the very first whaling station in the area, the Whitefish Station and the cemetery, which was attached to it.

Those remains of whalers and early settlements are dating back to 1,800 years. During that time, the American Arctic whaling ships used to sail off and in winters to Pauline Cove.

Herschel Island is enclosed by the ice from November to July, and there is no visible demarcation between the island and the mainland. The old whaling station and the cemetery are covered by ice and snow.

The island lies at the layer of permafrost. In summer, the upper layer heated enough that can grow rare arctic plants and flowers. Herschel Island is a special protected site, both because of its biological significance and its cultural heritage.

The coastline at Pauline Cove has already moved considerably closer to the whaling settlements that put them in danger of being engulfed by the sea.

Both of the old Inuvialuit cabins and the old cemetery are exposed to changing weather conditions. If the permafrost melts and the soil becomes soft and swampy, those sites will be destroyed completely.

I appreciate your comment on this page about Herschel Island in Canada, Pauline Cove, Inuit or Inuvialuit and their Inuvialuktun language. You can also use the form below to write about Bering Sea or any beautiful site in North America and Russia. It is good idea to leave your email address so you can receive replies to your comments from visitors like you.

I have some gifts for you too for sharing your words about Herschel Island or any beautiful places in Canada and the affects of global warming on them. Thanks.

Search for any information about Inuit people or Inuvialuit and their Inuvialuktun language or search inside any other beautiful locations in Herschel Island, Pauline Cove and Canada.


You can also enjoy more activities here indeed if you liked this page about Herschel Island in Canada.

I use "Solo Build It" tools at the bar below to empower this page about Herschel Island in Canada and the entire 100 Beautiful Sites in the World. Thanks to those strong website building and optimizing tools.