The Rio de la Plata's delicate balance of the ecosystem between freshwater and saltwater makes the area a natural home to rare species of dolphins, croakers and sea turtles.

How long could this exist during the recent climate change?

No one knows! If you knew, if you had been in the area or if you knew more information about it, please use the form at the bottom of this page to publish it. Thanks. 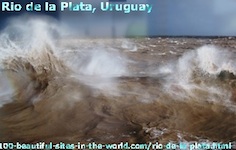 It is the second largest basin in South America and it makes about 25% of its surface. The basin covers southern and central Brazil, southeastern Bolivia, the entire nation of Paraguay, most of northern Argentina and Uruguay.

Different rivers feed the valley of Rio de la Plata, such as the Paraná River, the Paraguay River, and the Uruguay River, all of which has tributaries.

The confluence of Paranaiba River and Grande River forms the Parana River and makes it one of the longest rivers in the area. From the point of the confluence, it flows about 619 kilometres to the southwest towards the city of Saltos del Guaira, Paraguay.

The Paraguay River covers almost 20% of South America and it runs in the entire nation of Paraguay, southeastern Bolivia, southern and central Brazil, northern Argentina and most of Uruguay.

Every year 57 million cubic metres flow into the muddy estuary of Rio de la Plata, a coastal area with a lower salinity than the ocean.

The result of this flow is that fresh water from the Paraná River and Uruguay River collide together with the salt water from the southern Atlantic Ocean in a raging vortex caused by the strong southeastern winds, known as sudestadas and the changing tides.

At its widest point, the mouth of this immense estuary reaches 220 kilometres wide on the border between Uruguay and Argentina. It becomes the largest estuary in the world because it reaches this measure.

Argentina's capital Buenos Aires, a city founded by Pedro de Mendoza in the 16th century, around 1536 lies on the southern coast of the vast estuary. Uruguay's capital, Montevideo lies on the northeastern coast.

With its unique combination of saltwater and freshwater, the estuary keeps the soil in the surrounding landscape lush and fertile.

Rio de la Plata is a natural habitat to several endangered species such as sea turtles and the rare La Plata Dolphin, which is the only river dolphin that lives in the ocean and in saltwater estuaries.

The estuary is also home to the croakers. Those croakers are drum-fish that croaks like a frog. Every year from October to January, croakers migrate into the outer estuaries to spawn on the bottom of the water and eat mussels.

Weakfish or croakers have for generations been the main resource of food for the local Uruguayan fishermen, as well as the main food of the endangered La Plata dolphins.

The croakers are now under pressure from industrial fishing and pollution, and are also highly vulnerable to climate change.

In the future, it is likely that climate change will cause stronger winds, which in turn and together with the global sea level expected to rise higher, could lead to flooding of the Rio de la Plata coastal areas.

Not only that, but the flooding of the coastal areas will affect the delicate balance of the ecosystem between freshwater, destroy the croakers feeding ground and threat its very existence.

Have you been at Rio de la Plata, Uruguay? You can use the form below to write about this beautiful place in the world. Thanks for contribution.

In addition, you can share this page about Rio de la Plata, Uruguay with your services through the following buttons. Please do and enjoy those new technical experiences and social networking.

This page about Rio de la Plata is empowered by "Solo Build It" strong website building and optimizing tools on the image bar at the bottom of the page. Thanks to it.