In Kalahari Desert, the Bushmen See the Shamans Turn Into Lions!

If it seems like a mystery, keep on reading about 100 beautiful saharans in the world and please, get involved and tell us about your experiences in any beautiful desert in the world. 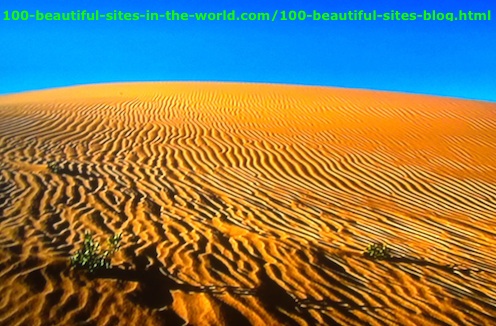 Perhaps, there might not be a beautiful place in a Sahara like Kalahari Desert. However, this place seems not like a Sahara, by some other measures.

In addition, the endangered indigenous Bushmen with their magic and healing make it a wonderful place in Africa and somehow mesmerizing.

The Bushmen indulge in the magic and they see their shamans turn into lions, just like that; and they see the leopards conjured from the landscape. That makes the desert amazing.

Moreover, the silence, the shapes the sand made, the rare animals, some oasis, the wild rare small plants, the sun and the moonrise with the reflection of its lights on the sand and the meeting of the sand with the sky at the far horizon make Kalahari Sahara nostalgic and attractive to many people. 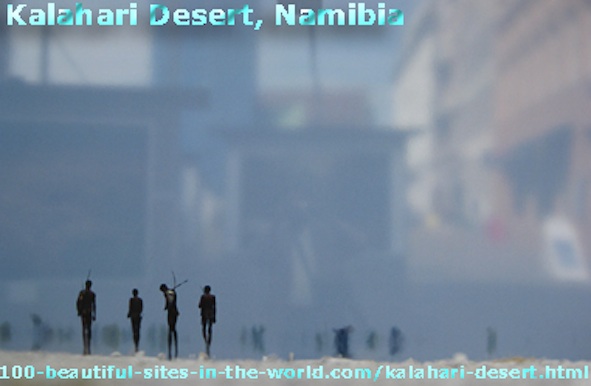 Let us follow the track into this desert through the following brief article. It is about this desert and about the endangered people's lifestyles in Africa, the Bushmen or the San People.

If you have more information about Kalahari Desert, the people who live there or near the area or about the wildlife, parks, any plants, animals and birds, please use the form at the bottom of the page to share your observation.

I have many useful gifts for you when you use that from to contribute to this page. Those gifts are good for both reading and using to benefit from them. Thanks.

Although Kalahari Desert does not seem like a Sahara, but like a basin, and has an entrance locations as much as a wildlife safari, this huge arid and semiarid Sahara stretches 350,000 square miles in south Africa to cover the north of South Africa, most of Botswana and the east of Namibia.

It is surrounded by Kalahari Basin, which stretches to more than 970,000 square miles to Angola, Zambia, and Zimbabwe.

The basin spreads also as far as to South Africa, where the Cape Floral Region lies, but it ends far from it; Namibia, where the Naukluft Park lies and Botswana where the Okavango River creates the Okavango Delta in the northeast; where the wildlife is richer.

It is believed that the Botswana part of Kalahari Desert was covered by Lake Makgadikgadi more than two million years ago. Read more about this in the resources on this page.

In the harsh climate of the Kalahari Desert in Southern Africa, the San people are always on the move, searching for wild fruits, berries and nuts, water and wildlife.

The San people are believed to be descendants from the first inhabitants in South Africa. They are also known for their excellent hunting abilities.

By mimicking an animal's movements, can men sneak into a whole bunch of animals and kill them with their poisoned arrows. They make their arrows from the kokerboom trees.

There are two hundred species of veldkos (a Dutch word for field food, which comprises native plants and even goes to animals) including tsama melons (which grow in central and southern Kalahari Desert), olives, figs, nuts and berries.

The Mole rats are among the animals of the Sahara that live under ground and hunt for their food collectively digging under the ground hunting for food and gathering it in one place.

They have their lips behind their teeth to avoid the sand and help them use their teeth as foraging tools.

It is believed that the San people, formerly known as "bush-men", is a descendant of the very first people who lived in Southern Africa.

Their ability to find water and food where no one else could have built them knowledge and that knowledge has been passed down from generation to generation.

Over time, European settlers, the armies and the farmers exploited the San people's incredible track-ability to prosecute poachers and guerrillas.

More recently, the San-tribal knowledge of desert plants led to the discovery of an appetite depressant drug that can treat obesity.

The San tribes have experienced several changes over the past 50 years than in the previous 40,000 years. Once there were millions of them, but now lives less than 2,000 San-people and lead a traditional hunting and gathering lifestyle.

Conflicts between the San people and both the neighbouring tribes and the European settlers have driven them out into more and more remote deserted areas in Kalahari Desert.

Today, the San-people severely affected by the transformation of the bush areas for privately owned cattle ranches.

Their search for fertile land will become even harder as desertification encroaches on the bush vegetation. They also face another problem.

Deep in the Kalahari Desert and in the dry vast grassland that stretches across South Africa, Botswana, and Namibia, the San or the Bushmen walk searching for food.

Carrying on with their traditional way of life, they have the desire to keep following their culture, which is the oldest living culture in the world, and they need to survive in their dwindling hunting grounds.

Producing the myths of the Kalahari Sahara, they live in the myths through which they see things such as, shamans who turn into lions and leopards conjured from the landscape as though by magic.

Their myths still live with them and they engage in them performing their trance inducing dances and their way of healing.

The shamans use their magic to cure other sick people, predict hidden things and occurrences, and to control the life around.

The Bushmen survived for over 60,000 years in peace and joy and they enjoyed their way of traditional living all these years. Through their mystical world, they built their own methods tracing God as a God of magic.

With rising temperatures and a rainfall that is expected to be reduced by up to 40% in the austral southern winter, desertification will ultimately kill the bush vegetation. Global warming could eventually prevent the last generation of the San people from hunting and gathering food on the desert plains.

The Environment of Kalahari provides an integrated, thorough and up-to-date review of the nature and development of the Kalahari environment, an environment of great ecological and geomorphologic diversity.

Its complex climatic and geological history and its long association with human societies attempting to utilise its natural resources are aspects of increasing scientific interest.

The Kalahari Environment has evolved from the authors' own research in the Kalahari, and attempts to provide explanations and answers to some of the many questions raised about this region, ranging from the commonly asked 'is it really a desert?', to more specific and detailed concerns.

The authors of the Kalahari Environment examine the structural setting of the Kalahari, sediments, climate, soils, and vegetation; the unusual and complex landscape shaped by the Quaternary period climate changes; and the archaeological evidence of human impact on this desert.

The interdisciplinary approach will make the book of interest to researchers, lecturers and advanced students in earth sciences, environmental studies, tropical geomorphology and Quaternary science. The extensive bibliography will also make the book a very important source of reference. 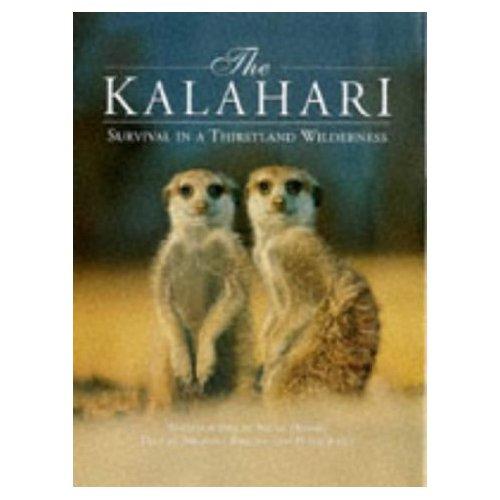 Afrikaners of the Kalahari: White Minority in a Black State (African Studies)

Yet Afrikaners have been living in the Kalahari for more than hundred years, their presence often studiously ignored by writers.

Since 1961, independent Botswana with its policy of scrupulous non-racialism has embraced both Afrikaner and Bushman in common citizenship.

The Afrikaners of the Kalahari: White Minority in a Black State attempts to describe the complex and mundane reality of ethnic relations in the Kalahari Desert, not only in the present, harried by relentless pressure to enter the cash economy of modernisation, but in the past.

Using oral history as a source, the authors describe the 'Africanisation' of these poor white pastoralists of the interior, cut off by the thirst land from those influences, which gave contemporary Afrikanerdom its particular cast.

They describe the pragmatic relations developed by Afrikaners with other peoples of the interior. How these relations have perceived and redefined with the shift in political power from British to Tswana hands.

Kalahari Hyenas: Comparative Behavioral Ecology of Two Species is a fascinating book, originally published in 1990 and now available again from The Blackburn Press, focuses on a comparison of the feeding ecology and social systems of the brown and spotted hyenas.

Set in the semi-arid region of the Kalahari, it examines roles and interactions of the two species in this finely balanced ecosystem and highlights the factors and mechanisms responsible for regulating the populations.

It explores the hyenas' interactions with other large carnivores are also explored and offers novel insights as to their natural behaviour. Extracts from the author's field notes form a fascinating feature of the text and convey all the thrill and anticipation of observing these remarkable animals in their own habitat.

"Widespread appreciation of this volume seems to have lagged somewhat, undoubtedly the result of an initial lack of promotion when it was first released.

You can either comment on this article about the Kalahari Desert and the San People or write your own.

To do so, please use the following form and contribute to this page. It is good idea to leave your email address to receive replies to your comments. It is also important to upload pictures with your comment or article. Thanks.

I have some gifts for you too for sharing your words about Kalahari Desert and the San People or any beautiful location on the area and the affects of global warming on those locations. Thanks.

You can also enjoy more activities here indeed if you liked this page about Kalahari Desert and the San People.

Please, share it with your social media services through the buttons at the left column, or the right column, or at the bottom of the page.

Comments on Kalahari Desert appear at the second section of the pages below the comments form. Make sure to comment on it before you leave to other pages. Thanks.

I use "Site Build It" tools on the images at the top left column and at the bottom of the right column to empower this page about Kalahari Desert, the San People and the entire 100 Beautiful Sites in the World. Thanks to those strong website building and optimizing tools.