The Congo River Basin spreads in the Democratic Republic of Congo. This is one of the (Cry, the Beloved Country) states in central Africa that has lost 5.4 million people during crazy wars in the area.

Wars have forced more than 250,000 people to flee their homes only in the last crisis since 1998, and other thousands of women were raped and have children from such crimes, forget about what had happened in many decades in the past.

However, this page is only about the Congo Basin as a beautiful place in the world, its Mbuti pygmies and the affects of climate changes upon all this diversity in humankinds, animal species and plant species.

If you wanted to know more about politics in the DRC, hit this link to open a new window into my dad's political site. 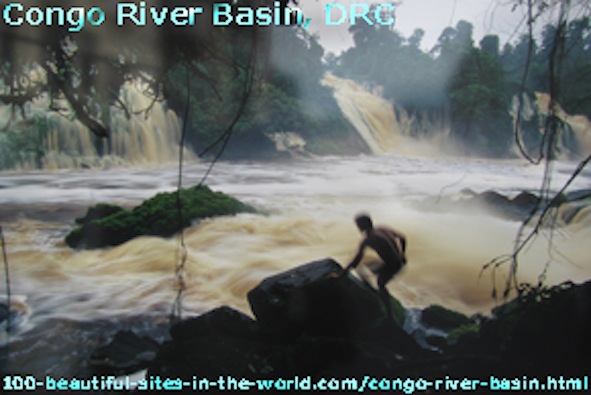 However, in spite of its rich natural resources the Democratic Republic of Congo is on of the poorest nations in Africa.

Therefore, the country struggles to recover from both the horrible past and the ongoing war and to restore peace and save the treasures of the nature. Read about the political scene in the Democratic Republic of Congo (DRC) at the link above.

People of the DRC are form many identities based of different tribes and they have rich traditional cultures, arts and customs. Among them, the Songye people were one of many human entities on the Congo River Basin.

They faced their fate in the past during the Belgian colonization to safeguard their way of live and identity. (Historically, the Songye have been portrait and limited to the context of art and music. Little has been said or written about the Songye as a people).

There is great biodiversity that include rare endemic species such as the common chimpanzee and the bonobo (Pygmy Chimpanzee), mountain gorilla, white rhino and okapi, thus listed as World Heritage Sites by UNSCO.

Wars and trapping the animals and deforestation in addition to climate change are all dangers to the biodiversity in the Congo River Basin.

The rainforest in the Congo River Basin represent 70% of all Africa's plant cover and are the second largest rainforest after the Amazonia. They cover more than one million square kilometers.

More than 40 million people depend on the Congo Basin Rainforest for food, products, energy and medicine. The rainforests stretch to 10 countries where 123 million people live and benefit from the forests.

People living on the Congo River Basin have freshwater and rich fish fauna with different fish species. The Congo River begins in the highlands in the east African rift and stretches 3.7 million square kilometres to end in the Gulf of Guinea on the Atlantic Ocean.

The area experiences high rainfall and high temperature all year, all of which make this area very beautiful, despite the bitterness of the heat and the insects.

One of the indigenous groups, the Mbuti pygmies live in the Ituri forest in the northeastern part of the Democratic Republic of Congo, threaten by non-stability in the country and threat the diversity of the species in the forest as well.

Those nomads are one of the indigenous groups in the African continent and are original inhabitants of Ituri. The forest is both the material and the spiritual underpinnings of their culture and their living conditions.

Pygmies grow to between 130 and 150 centimeters tall and the Mbuti are one of many groups that live along the Congo Basin, which stretches from Cameroon in the west to Zambia in the southeast.

This vast area contains the world's second largest tropical rainforest, surpassed in size only by the Amazon. Rainforest in the Congo Basin is one of the most species-rich areas in the world, and about 90% of the area is untouched.

However, an increasing deforestation could change this beautiful picture. This is a threatening factor, which is increased by the new development of the environmental atmosphere in the world.

Half of the forest will be gone within the next 50 years, if logging continues at the current pace. This would not only threaten the Mbuti pygmy's livelihoods, but also rare species as okapis, chimpanzee, leopard, elephant and buffalo, all of which live in the Ituri forest.

Large amount of CO2 released into the atmosphere, as result of deforestation. In 2004, a massive 8.4 billion tons of CO2 emitted worldwide because of deforestation. This is equivalent to a quarter of the global emissions from fossil fuels.

You can also enjoy more activities here if you liked this page about the Congo River Basin in the Democratic Republic of Congo. Please share it with your social media services through the buttons at the left column, the right column and the bottom of the page.

Have comments on the Congo River Basin?

Use the following comments form to share your views. Thanks.

Everything about the Congo River Basin in Amazon!

Comments on the Congo River Basin appear at the second section of the pages below the comments form.

I use "Site Build It" tools at the top left column and the bottom of the right column to empower this page about the Congo River Basin and the entire 100 Beautiful Sites in the World. Thanks to those strong website building and optimizing tools.