Rotterdam, the Bride of the Sea!

Rotterdam is the bride of the sea. Sometimes, the sea gets high emotionally, and that happens when Nereus feels bad because of love and wants to punch his bride by waves and sea storms.

No wonder why it keeps itself protected and hides behind dykes, dams and barriers. Since she is beautiful shy bride, she has no other means to express her love and protect herself at the same time from Nereus' anger.

Let us get to realities through the following short article. However, if you love this bride drop some of your love in the form at the bottom of the page. Thanks. 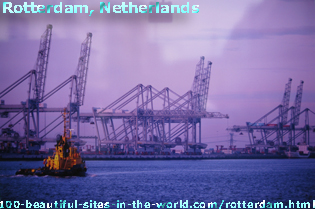 With more than half of the city lying below sea level, the people of Rotterdam have lived behind dikes and dams to protect them from the ocean and its storms and floods for almost 900 years. Large floods started 1150 demanded the construction of those protective dykes and dams.

In this respect, 55% of the whole of the Netherlands is below sea level. The very lowest point is 6.76 meters below sea level and located just east of Rotterdam's city center, which means that the city is extremely sensitive to storms, floods and any rise in the sea level.

The shipping trade has been Rotterdam's principle economic asset since the 1350s. Today, the city is the largest port in Europe and one of the busiest in the world, accounting for 25% of the Netherlands' total emissions of CO2.

The shipping canal was completed in 1350 allowing the city to be transhipment centre between Holland, Germany, and England and then became large port that connected worldwide with other international ports.

In the late 1990s, they constructed a storm-surge barrier, the Maeslantkering, to protect the city and its surrounding areas from rising sea levels and flooding. The storm surge barrier was located between Hoek van Holland and Maassluis. It has two huge gates, each the size of the Eiffel Tower, that allow the inlet to be closed to the harbour and its hinterland.

The barrier is one of the largest moving structures on Earth, and is designed to withstand a sea level rise of five meters. It closes automatically when the water level is forecast to rise to three metres above normal. According to Dutch prognoses, this should occur only once every 10 years, and from 2050 once every five years.

Watch this video and see the Maeslantkering (Nieuwe Waterweg) in action.


In November 2007, that was 10 years after it was inaugurated, the barrier closed for the first time. Just a few years earlier, a flood had fallen a mere centimetre short of the threshold but the gates remained open. During a major storm in 1953, a level of 3.85 metres was registered.

Although Rotterdam seems safe for the time being, climate change could cause a further rise in sea levels, extreme storms and flooding.

Well, since the people of Rotterdam live behind dikes and dams to protect them from the ocean and its storms and floods, they developed their protection methods to save their cities and make the best ports in the world that earns them the high income in the country. The barrier, they built is one of the world's unmentioned wonders.

What people love in Rotterdam? Some people love many things in this city. So tell us about things you love in this city through the following form. Some readers to this page will certainly appreciate your useful contribution. I will do too. Many thanks.

Well, here are more things to do if you have enjoyed reading this page about Rotterdam. Please share it through the buttons here, at the left column of the page and at the bottom of the page. This could be also additional value to you, as you could experience some social networking technologies and know more.

I use "Solo Build It" tools at the bar below to empower this page about Rotterdam and the entire 100 Beautiful Sites in the World. Thanks to those strong website building and optimizing tools.