Nuwara Eliya is the Sri Lankan City of Light and Tea!

Nuwara Eliya produces pure Ceylon tea in Sri Lanka and makes the country the world's third largest producer of tea! The district is in the south part of the Central Province in Sri Lanka and it spreads to 1,706 square kilometres with a population of 703,610.

If you have more information about the district, the capital of the district or about any beautiful place in Sri Lanka, please share it through the form below and receive useful gifts for doing so. Thanks. 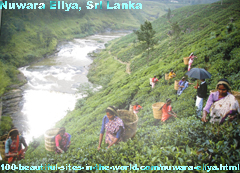 It lies on the central highland and spreads to 1,228 square kilometres with a population of 27,449 from the three nationalities of Sinhalese, Tamil and Moors.

Tourist Attractions include places for boating and fishing in Lake Gregory, trout streams, golf course, places of many bird species including the Scaly Thrush, Pied Thrush and Indian Blue Robin, in addition to the Kashmir Flycatcher in the park, Galway's Land Bird Sanctuary near Lake Gregory and Victoria Park.

The well-know British explorer to the Lake Albert, the Nile and central Africa, Samuel Baker travelled to Ceylon in 1846.

He has founded that place as a hill station for the British colonization and the agricultural settlement in Nuwara Eliya and he wrote his books "The Rifle and the Hound in Ceylon" on 1853 and "Eight Years' Wanderings in Ceylon" on 1855.

The tea originates from China where it has been known to drink for several thousand years. A legend tells that a Chinese emperor discovered it in 2737 BC when some tealeaves accidentally blew into a pot of boiling water.

During the 1600s, the tea was popular in Europe, but commercial cultivation began not until the 1800s, when British colonists established tea plantations in India and Ceylon - Sri Lanka today.

The first tea plantations were established in Ceylon in 1840 and today Sri Lanka is the world's third largest tea producer.

The label "Pure Ceylon Tee - packed in Sri Lanka" is a sign of quality throughout the world and its main source of foreign exchange. That label has dominated through the old golden days before the world knows the human made climate change.

More than 700,000 workers and their families depend on tea industry, which is divided between large publicly owned - but privately run - plantations and private small-scale producers.

The latter contributes 58% of the annual production of 300 million kilograms of black tea, though they only own 44% of plantations.

Tea grows mainly on the slopes in highland areas in central and southern parts of the country at altitudes from 760 to more than 1800 meters above sea level.

It requires good distribution of rainfall, temperatures between 18º and 25º C and many sunny days. The Sri Lankan highlands are thus perfect for tea cultivation.

Within the next 60 years, global warming will cause significant damage to the production of tea. Higher temperatures and drier weathers will most likely lead to droughts, which will reduce yields and ultimately disrupt many tea plants.

Periodic Torrential rain may erode the soil, cause landslides on the steep slopes, and they will lead to poor growth, because the dense cloud cover will reduce the number of sunny days.

The small tea cultivators will be hit hardest by climate change, since they have neither the quantity of land nor the economy, there required to take such steps as are necessary to address the effects of global warming.

In addition to this page about Nuwara Eliya, Nuwaraeliya District, Sri Lanka, Tea Producer, Ceylon Tea, here are some other beautiful places in the world you can visit through thr alphabetical category in the Beautiful Site Map here.

You are welcome to comment on this page about Nuwara Eliya, Nuwaraeliya District, Sri Lanka, Tea Producers and Ceylon Tea. You can also write article about those places mentioned here. Thanks. I have some useful gifts for you when you contribute to this page about the Nuwara Eliya that you can use and benefit from them.

Search inside Nuwara Eliya District, Sri Lanka or search for any information about tea producers and Ceylon tea.


You can also enjoy more activities here indeed if you liked this page about Nuwara Eliya and Nuwaraeliya District in Sri Lanka.

I use "Solo Build It" tools at the bar below to empower this page about Nuwara Eliya and Nuwaraeliya District in Sri Lanka and the entire 100 Beautiful Sites in the World. Thanks to those strong website building and optimizing tools.