The Bering Sea is seemingly not a special sea by that name although the name exists on maps. It is just a part of the North Pacific Ocean.

However, it bears its name, as well as other places in the following lines from the Danish navigator, Vitus Jonassen Bering who was born in Horsens in Denmark on 12 August 1681 and died in Bering Island in Russia on 8 December 1741.

The following article supported by the links below is about some of those exploration events. However, it is also abut the Bering Sea and the affect of climate change.

If you know any further information about the mentioned events or the Bering Sea or any of the characters here, please use the form at the bottom of the page and the forms in the relevant pages to write it. I have some useful gifts for you when you contribute to any of these pages. Thanks. 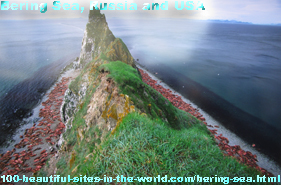 Vitus Bering commanded an exploration expedition across northern and eastern Siberia in 1725 on behalf of the Russian Tsar Peter the Great, who wanted to know whether Siberia and North America were connected by land or not.

Although Bering's mission was different in nature from other exploration events, but he preceded several pole expeditions that had reached other places in the Arctic Ocean and Ross Ice Shelf on it and further to Herschel Island continuously in 1725, 1893, 1909, 1911 and 1969.

Tsar Peter (1682-1725), has given himself the title of Peter the Great. He was born to Tsar Alexius Mikhailovich and Natalia Naruishkina in Moscow on 30 May 1672 and was the first in Russia to be proclaimed as Tsar in 1682 at the age of ten.

Although he was described as cruel and decisive person, he was ambitious, courageous and intuitive so he wanted to know the lands surrounding his inherited territories.

Therefore, he employed Vitus Jonassen Bering in the Russian Naval in 1703, as sub lieutenant known amongst Russian sailors as Ivan Ivanovich, and later wanted him to explore the area beyond Siberia.

Bering spent three years on his way to reach what is today known as the Bering Strait. The large sea area south of that narrow strait covers more than 2 million square kilometres, and stretches all the way to Alaska Peninsula and Aleutian Islands.

Many locations in the area were also named after the explorer's name. Among those areas are Bering Glacier, Bering Land Bridge and Bering Island.

The Bering Sea is exceptionally rich. Almost half of all seafood caught in the United States of America comes from this sea and nets revenues of around 1 billion dollars annually. The Russian catch brings about 600 million dollars.

In addition, over 30 species of seabirds breed in the area, including the Spectacled Eider and the endangered short-tailed Albatross.

The cornerstone of rich marine biodiversity in the area is Diatom, a large phytoplankton that grows on the underside of the ice. The northern Bering Sea is typically covered with ice seven months a year.

When the ice melts, Diatoms sink down to the bottom where they form a rich food layer for the seabed animals, which then become food for birds and marine mammals.

Walruses play an important role in the ecosystem; by messing up in bed and rotting for food with their bearded muzzle so they bring the important nutrients in circulation again.

With the warming of the oceans, the biodiversity in the Bering Sea will ultimately change. There is already less ice now than for just a few decades ago. The ice melts earlier each year, which reduces Diatoms size and number.

As the cool water warms, the fish and crabs move north searching for food supplies, which until now has been reserved for the ice species that depend on them.

All in all, it means that there are new mouths to feed and less food for sea lions, walruses and whales. It is expected that all the ice in the Bering Sea will be gone at the end of the 21st century.

In addition to this specific topic about Bering Sea, I have some pages on this website about other topics in Russia you can link to them on Altai Mountains, Lake Baikal, Siberia and Yamal Peninsula.

I appreciate your comment on this page about Bering Sea, Russia, USA, Tsar Peter the Great and Vitus Jonassen Bering. You can also use the form below to write about Bering Sea or any beautiful site in North America and Russia. It is good idea to leave your email address so you can receive replies to your comments from visitors like you.

I have some gifts for you too for sharing your words about any beautiful places in Russia and the affects of global warming on them. Thanks.

Search for any information about Bering Sea, Tsar Peter the Great and Vitus Jonassen Bering or search inside any other beautiful location in North America and Russia.


You can also enjoy more activities here indeed if you liked this page about Bering Sea, Russia, USA, Tsar Peter the Great and Vitus Jonassen Bering.

Most importantly, in case you enjoyed traveling on the Bering Sea on this page, please "like" and "tweet" it using the small buttons at the top of the right column. Thanks.

I use "Solo Build It" tools at the bar below to empower this page about Bering Sea and the entire 100 Beautiful Sites in the World. Thanks to those strong website building and optimizing tools.