The Niger Delta is So Beautiful!

The Niger Delta is one of 100 beautiful sites in the world. Many facts make it very important. The river basin is large and it stretches widely to many countries in West Africa to touch Central Africa, where more than 100 million people of cultural diversity live.

But, this page is only about the Delta of the Niger River in Nigeria to enjoy reading about it. If you have additional views from different angles, you are welcome to write them in the form below. You can also use the form to write about the delta in the other countries. Thanks. 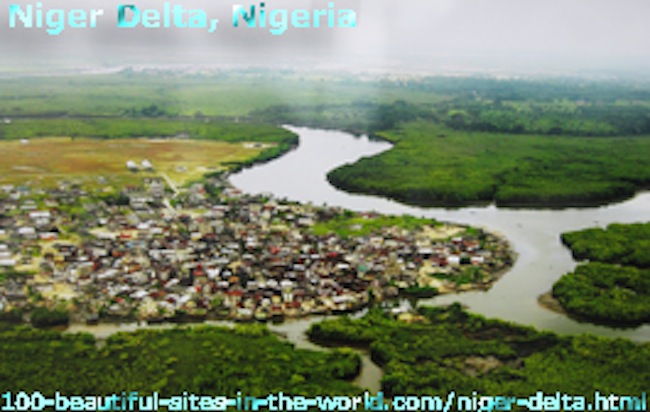 The Niger Delta occupies a significant part of the Gulf of Guinea and stretches to cover 20,000 square kilometres of the Atlantic Coast in southern Nigeria / West Africa.

It is the world's second largest delta and home to around 25 million people in Nigeria and more than 100 million people on the entire area the Niger River runs through, which makes it the very important asset to the people in Central Africa and West Africa.

The Niger River Basin is the third largest basin, as it runs in Benin, Burkina Faso, Cameron Chad, Côte d'Ivoire, Guinea, Mali, Niger and Nigeria. So, it is an origin of identity. It is used as a route of migration and commerce through history until now.

Forget about the impacts of the global warming, the Delta of the Niger River becomes the source of water conflicts and identity conflicts between some of these countries.

Well, in fact, it should be an important asset for cooperation between the authorities of those states to meet the new threats of climate change and to strengthen their people and enhance the treasure of their countries. 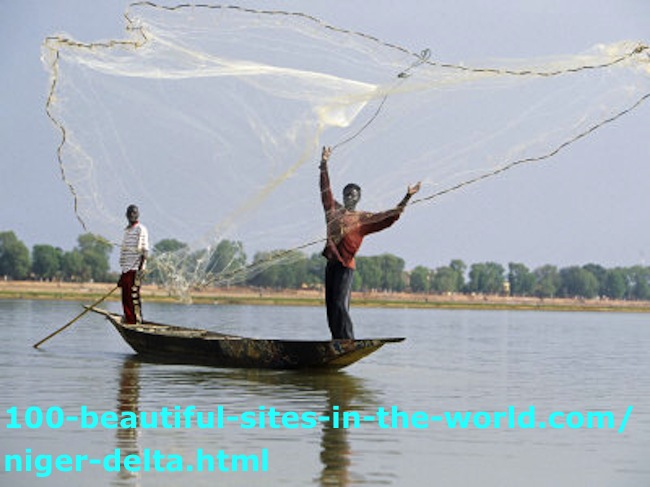 The framework and the shared vision process, which the Niger Basin Authority has been mandated to foster through cooperation and commit to address sustainable management and the development of the Niger River Basin's resources sometimes don't work, especially when clashes rise between these states.

The Niger Delta along with the main basis consists of rivers, streams, estuaries, wetlands, and thousands of villages that are scattered throughout Africa's largest mangrove swamp.

The People of the Niger Delta

People once called the densely populated delta of the Niger River in Nigeria the Oil Rivers because it was a major producer of palm oil.

It had been a British Oil Rivers Protectorate from 1885 until 1893. It became after that the Niger Coast Protectorate until the independence of the country.

The Wealth of the Niger Delta

Not far from its main city, Port Harcourt, the delta also holds some of the world's richest oil reserves in the vicinity of the main city Port Harcourt. This treasury makes Nigeria the world's seventh largest oil producer.

The Niger Delta produces immense oil wealth. It becomes the engine of Nigeria's sustainable development and growing strategic interest to the global economy.

Therefore, Nigeria stands as the fifth-largest supplier of oil to the United States, with over 35 billion barrels of proven reserves.

However, the vast oil revenues have barely made an impact on the regions' own pervasive local poverty.

Most of the labourers in the oil fields consist mainly of temporary migrant workers, while local people in the delta, who come from 40 different ethnic groups make their living from farming and fishing.

They have the lowest work wages in Nigeria. Many of them live below the poverty line. Moreover, violent rivalries between different warlords and ethnic groups frequently lead to outbreaks of violence.

The instability in the region threatens production, drives up crude oil prices and affects the global economy that depends on oil from the Niger Delta.

The peace in the region is essential to generate wealth and prosperity for the people in the Niger Delta.

The importance of the Niger Delta to the American needs of oil is that it is the shorter distances for the American tankers to travel to import higher and sweeter crude than the Middle East variety.

The Gulf of Guinea provides a quarter of the United States crude this year, replacing the Saudi Arabia as a leading oil supplier.

The Ecosystem of the Niger Delta

The Niger delta's ecosystem contains one of the Earth's highest concentrations of biodiversity with numerous species of both flora and terrestrial and aquatic fauna that live both on land as in water.

It is also the home of the world's largest diversity of butterflies. However, extensive oil production has caused widespread pollution in parts of the delta.

The contamination is one of the challenges that face the Nigerian government. The anticipated future climate changes including increases in sea levels and extreme weather events could lead to significantly increased flooding of the delta.

In addition to this, it will destroy the mangroves and affect seriously the agriculture, fisheries, infrastructure and the livelihood of the local communities. It will also affect the oil production seriously.

To top it off, it is likely that the people of the region would become increasingly vulnerable to water-borne diseases such as malaria, dysentery and cholera.

Some sources predicted that at the end of this century climate change might destroy large parts of the delta if the concerned directions have not done the necessary steps to prevent the catastrophe.

That will force millions of people who are robbed of their basic income, to leave their homes and go elsewhere.

The River embodies both these nations' livelihoods and their geopolitics. It is not simply water but rather an origin of identity, a route for migration and commerce, a source of conflict, and a catalyst for cooperation.

This is a comprehensive overview of the Niger River Basin water resources and their sustainability to help trans-border cooperative environmental and water resource management by capturing the full spectrum of the Niger ecosystem's values and benefits and supporting the integration of science and decision-making.

The Niger River Basin provides an overview of the water resources potential, discussing the river basin's, geology, hydrology, climate, and water quality and use, and providing a vision and approaches for sustainable development of water resources.

In addition to the Niger Delta, you may also be interested in the following African places and some other African topics:

Enjoyed this page about the Niger Delta?

Please, tweet, like, follow or pin the pictures. Thanks. If you knew more information about the Niger Delta, please use the following form to write it in good details.

"Site Build It" on the link at the bottom of the main column here and at the buttom of the right column empowers this page about the Niger Delta. It empowers the entire 100 Beautiful Sites in the World. I love SBI, because it makes building my hobbies online snaps!

Comments on the Niger Delta appear at the second section of the pages below the comments form and above this paragraph.