The first time I heard about Saint Louis was in the early 1980s, in an interview with the Cultural Attaché of the Senegalese Embassy in Kuwait.

The occasion of the interview was the brief unity between Senegal and Gambia that had given birth to the Senegambia state in West Africa.

The heart of the colonial city of Saint Louis, the capital of Saint-Louis Region is located on the border with Mauritania, northwest of Senegal on the island of Ndar where the Senegal River flows into the Atlantic.

The city has expanded eastward into the mainland, where it is surrounded by swamps, and over time, it has encroached to the west on the long, narrow sand of Langue de Barbarie peninsula.

The following lines are about Saint-Louis and the climate change that affects the region entirely.

If you have more information about the area or about any beautiful site in Senegal, please use the form at the bottom to contribute to this page and receive invaluable gifts for doing so.

Those gifts are useful and you could use them to better your life. Thanks. 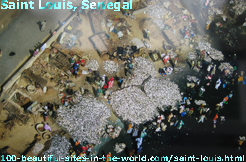 French traders founded Saint Louis in 1659 on the uninhabited island Ndar and named the city after the French King Louis XIV.

He had the longest reign period in the European history from 1643 to 1715 and the French culture became during his reign appealing worldwide. In April 9, 1682, the Mississippi River valley was claimed for him and Louisiana was named in his honour.

For nearly three centuries, the city served as the capital of French West Africa and was one of the most active cities in Africa.

Not only the treasury of the city has been exploited to the benefits of the merchants, but also the slave trade was one kind of the humiliation the citizens have faced for decades and has been the shame of that century.

However, ethnic movements had fierce confrontation to such kind of trade through the years.

The European merchants in the city exported slaves (which is indeed a bad trade), ivory, gold, skins, gum Arabic (Arabic gum) and later peanuts to their beneficiaries, the Atlantic merchants.

There was a French-African community in St. Louis during that period. Descendants of local women as well as European merchants became indispensable middlemen in trade between the middle and the upper parts of Senegal and the coast.

French-Africans were not only an important part of the economic life in Saint Louis, but this community constituted and refined urban bicultural status.

Saint Louis' colourful and vivid life except of course the slave trade faded when Senegal became independent in 1960, and Dakar, instead became the capital. Since then, Saint-Louis has struggled to stay upright.

Today, the economy of the city is based on tourism, sugar production, agriculture and fisheries all of which make the foundation of income. However, for many of Saint Louis' residents poverty is an ever present phenomenon.

This leaves a hope that the authorities in Senegal must struggle to address such economical matters for the benefits of the poor. There are about 176,000 inhabitants in Saint Louis.

Saint Louis was on the list of the UNESCO World Heritage Site since 2000. Many historic building on the island has been furnished as hotels and restaurants.

There are many natural sites in Saint-Louis region. Those beautiful sites include:

However, Saint-Louis is now extremely subject to flooding from the river, high tides and periodic heavy rainfall.

The city's rapid urbanisation and growth has led many poor people to particularly clump together and set up home in parched riverbeds, which is virtually uninhabitable because of the risk of flooding and landslides.

Poor infrastructure and inadequate drainage networks are also part of the problem.

Repeated floods are disastrous. They have caused water pollution, diseases and more poverty for the already impoverished families and communities in Saint-Louis.

This study covers the outlook for products and services in Saint-Louis.

Estimates reported are given for the latent demand, or potential industry earnings (P.I.E.), for Saint-Louis across hundreds of categories (in millions of U.S. dollars) and of the region and of the globe.

This report does not discuss the specific players in the market serving the latent demand, nor specific details at the product level.

The study also does not consider short-term cyclicalities that might affect realized sales. Therefore, the study is strategic in nature, taking an aggregate and long-run view, irrespective of the players or products involved.

This study does not report actual sales data, but give, however, my estimates for the latent demand, or the P.I.E. for a variety of categories.

In order to make these estimates, a multi-stage methodology was employed that is often taught in courses on international strategic planning at graduate schools of business.

Culture and Customs of Senegal

A blend of indigenous life in the rural countryside and metropolitan culture in urban centers, Senegal has been a small, yet prominent country on Africa's western coast.

In this comprehensive study of contemporary Senegalese life, readers will learn how daily lifestyles are celebrated through both religious and secular customs.

Students can investigate how Senegal's oral storytelling, Islamic roots, and French colonialism have shaped literature and media in today's society.

From the street to the studio, the topic of art in Senegalese life is also covered. Ross also delves into architectural styles and modern housing in urban environments, while also covering typical cuisine and traditional fashion.

Readers will learn about the typical Senegalese family as a social and economic unit, and will see how music, dance, and sports play an integral role in their lives.

Ideal for high school students and general readers, this volume in the Culture and Customs of Africa series is a perfect addition to any library's reference collection.

This is a unique study of modern art in post-independence Senegal.

Elizabeth Harney examines the art that flourished during the administration of Léopold Sédar Senghor, Senegal's first president, and in the decades since he stepped down in 1980.

As a major philosopher and poet of Negritude, Senghor envisioned an active and revolutionary role for modern artists, and he created a well-funded system for nurturing their work.

In questioning the canon of art produced under his aegis—known as the Ecole de Dakar—Harney reconsiders Senghor's Negritude philosophy, his desire to express Senegal's postcolonial national identity through art, and the system of art schools and exhibits he developed.

She expands scholarship on global modernisms by highlighting the distinctive cultural history that shaped Senegalese modernism and the complex and often contradictory choices made by its early artists.

It is heavily illustrated with nearly one hundred images, including some in color

In Senghor's Shadow surveys the work of a range of Senegalese artists, including painters, muralists, sculptors, and performance-based groups—from those who worked at the height of Senghor's patronage system to those who graduated from art school in the early 1990s.

Harney reveals how, in the 1970s, avant-gardists contested Negritude beliefs by breaking out of established artistic forms.

During the 1980s and 1990s, artists such as Moustapha Dimé, Germaine Anta Gaye, and Kan-Si engaged with avant-garde methods and local artistic forms to challenge both Senghor's legacy and the broader art world's understandings of cultural syncretism.

Ultimately, Harney's work illuminates the production and reception of modern Senegalese art within the global arena.

I hope you have enjoyed this page about Saint Louis in Senegal and the general highlights on Senegal.

You can comment on this page about Saint Louis in Senegal or write about any other beautiful sites located in Senegal.

I have some gifts for you too for sharing your words about any beautiful location in Senegal and the affects of global warming on those locations. Thanks.

Search inside Saint Louis/Ndar or any other beautiful places in Senegal.


You can also enjoy more activities here if you liked this page about Saint Louis in Senegal. Please share it with your services through the buttons here, at the left column of the page and at the bottom of the page.

I use "Solo Build It" tools at the bar below to empower this page about Saint Louis in Senegal and the entire 100 Beautiful Sites in the World. Thanks to those strong website building and optimizing tools.