Ganges Delta is the Bengali Granary!

The Ganges Delta has also two other names as the Bengal Delta and the Sunderban Delta. It is the Bengal granary and it lies at the spot where two great rivers meet to construct naturally the fertile land on the delta before they end in one valley into the Bay of Bengal.

The river-created delta lies in the west of Bangladesh, West Bengal and India. It is so fertile for Bengalis to grow crops such as rice, tea, jute or hemp, lentils, oil seeds, sugarcane, and potatoes. Approximately 300 million people depend on those crops, and 130 million of those people live in the delta.

The following article is about this delta in Bangladesh. If you have more information, please use the form at the bottom of the page. I will reward you for doing this by some useful e-books you can use to benefit from them, or just read for more knowledge. Thanks. 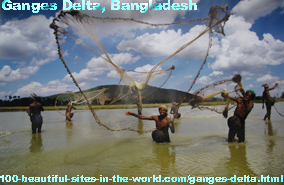 Bangladesh itself is a land that the Ganges and Brahmaputra rivers formed on this area. Ganges River rises in the Himalayas. Residents on the valleys use the river for irrigation, fishery and electric power.

Indian sing for the river an Indian song I remember in an Indian film about love of course that says, "The Ganges is my mother and the Himalaya is my father," that the hero of the film sang to his girlfriend. So, the Ganges River is a holy river to those Hindu faith followers.

In the same meaning, the poet Rabindranath Tagore wrote in 1916. "I can not keep your waves," says the width of river. "Let me save your footprint in my heart."

These words from the Indian poet; well some source say Bengali poet; and Nobel laureate Rabindranath Tagore, they call in Bangladesh "Bengal bard" is just as valid today as when they were written nearly a hundred years ago.

About (700 rivers according to wikipedia, 230 according to Reuters) with their tributaries and distributaries flow through Bangladesh and form many small islands and deltas and most of the country is formed out of the silt they built on the banks of the delta.

However, Bangladesh has limited control on the rivers, although it launched ambitious campaigns and programs that cost $1.5 to save the rivers.

The two major rivers, Ganges and the Brahmaputra meet in the Bay of Bengal, where they produce the huge Ganges Delta, in addition to Meghna River in the southwest.

Rivers, which fertilize the soil of paddy fields in the low-lying delta with their rich nutrients, are equally essential for the local farmers, which are two thirds of the population, as they can be dangerous because of flooding.

The Delta extends over 105,000 square kilometres to cover the entire southern part of Bangladesh and continues into the Indian state of West Bengal. It is extremely vulnerable to climate change that will increase precipitation and cause more frequent and stronger hurricanes and floods.

With a predicted increase in temperature, the sea level will surely rise significantly during this century. It will mean that parts of the Ganges Delta will be permanently flooded within the next 50 years. In 2050, around one million people may be forced to leave their farmlands in the Ganges Delta.

You can either comment on this article about Ganges Delta, Ganges River, Brahmaputra River and Meghna River in Bangladesh or write your own. To do so, please use the following form and contribute to this page. It is good idea to leave your email address so you can receive any reply to your comments.

I have some gifts for you too for sharing your words about any beautiful location on Malagasy and the affects of global warming on those locations. Thanks.


You can also enjoy more activities here if you liked this page about Ganges Delta, Ganges River, Brahmaputra River and Meghna River in Bangladesh.

I use "Solo Build It" tools at the bar below to empower this page about Ganges Delta, Ganges River, Brahmaputra River and Meghna River in Bangladesh and the entire 100 Beautiful Sites in the World. Thanks to those strong website building and optimizing tools.