The 100 Beautiful Dodecanese Islands in Greece are at the southeast of the mainland and southwest of Turkey. There are about 162 islands in the Dodecanese group of islands, out of which 12 islands are larger. Most of the islands are not inhabited, but only 26.

In this specific location, the Dodecanese group of islands mark the limit of the eastern Sea of Crete and so the islands are somehow part of the southern Sporades group of islands. Read about 100 beautiful Sporades Islands here.

They have fallen under Crete during the Neopalatial era and they were ruled after the Minoans by the Mycenaean Greeks and the islands prosperity started during the Dorians in the 110 BC. For more information about the history thoroughly to the Middle Ages the Ottoman the Italians read http://en.wikipedia.org/wiki/Dodecanese. 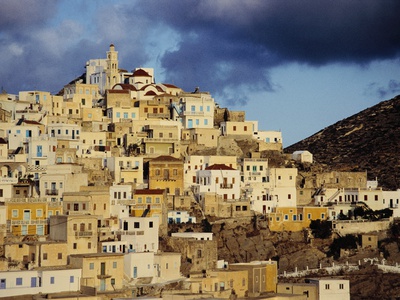 The beautiful Astypalea Island, or as also called and written Astipalea and Astypalaia has some nice and beautiful sites that could make good impressions about it. The Italian call it Stampalia. It is about 18 kilometers in length and 13 kilometers in width. The total area is about 97 square kilometers.

The coastal areas of the island are rocky, so there are small pebble beaches. The island had once been occupied by the Ottoman Empire in 1522 and they called it Istanbulya. The Municipality of Astypalaia consists of the island and many other small uninhabited islets including Ofidoussa and Syrna.

It is very interesting that the name of the island as a word has and still been used by many Arabic speakers for hospital. This word is used broadly by the people of Sudan, where Korodofan lies. The only difference is that they sometimes put the "p" before the "ty".

Some resources consider the islands to be among the 100 beautiful Cyclades Islands. Read and tell us your most rhythmical impressions in the beautiful Island of Astypalia.

The beautiful Kalymnos Island, or as also written and called Kalimnos is the sponge divers' island in Rosario Strait the fourth largest island there in the southeast of the Aegean Sea. It was known as Kalydna but renamed Kalymna in the 4th century BC.

In the beautiful Kalymnos Island, you could enjoy your utmost pleasure. Kalymnos is one of the beautiful Islands in Greece and is the 4th largest island in the Dodecanese group.

The beautiful Karpathos Island is the second largest island in the Dodecanese group of islands in Greece. What is beautiful and interesting in the Carpathian Island? Read or write about the Greek beauty in Karpathos.

Th island is about 47 kilometers southwest of Rhodes and it lies in an area in the Mediterranean Sea called Carpathian Sea. In this location the island defines the limit of the eastern limit of the Sea of Crete. The Municipality of Karpathos is formed from the island and Saria Island, which is a small island.

The beautiful Kos Island covers 107 square kilometers in the south Sporades group of islands on the Aegean Sea with 30,947 inhabitants. It has stunning beaches, beautiful mountain villages and some other attractions.

The beautiful Kos Island is the third largest island in the Dodecanese complex of islands after Rhodes and Karpathos. There are many beautiful and amazing places in the beautiful Island of Kos.

The beautiful Leros Island covers 111 square kilometers with 8,207 inhabitants in the southern Aegean Sea and belongs to the Dodecanese group.

Leros supported the democrats of Athens during the Peloponnesian War between 431 BC-404 BC and the bays and the harbors of the island were very important during that time and thus strategic.

The beautiful Lipsi Island, or Lipsos, or Leipsoi is a small island and one of the Pleiades in the Dodecanese group of islands.

The Pleiades has two definitions in astronomy and mythology, which are respectively a the following:

The Seven Sisters in the constellation of Taurus and the companions of Artemis known from the story that says the seven daughters of the titan Atlas and the sea nymph Pleione born on Mount Cyllene.

Did you know any thing about this definition? Use the form on the linked page to write about it in details, so we could learn more.

The island is at the north of Leros and south of the beautiful Samos Island. Several ferries sailing from Leros and Patmos serve the island. The Municipality of Leipsoi is part of the Kalymnos Regional Uint.

It attracts travelers from other larger and beautiful Greek islands. Did you find Lipsi Island beautiful? Use the comment form on its page to write about it and upload beautiful pictures.

The beautiful Nisyros Island, or Nissyros, or Nissiros island is a volcanic Greek island in the Aegean and it is between Kos and Tilos.

The island is lush and round and it belongs to the Dodecanese group of islands. Occupying 50 square kilometers, the island has only 4 beautiful villages and few beautiful beaches.

Nisyros Island with Gyali Island and the uninhabited areas of Agios Antonios, Kandelioussa, Pacheia, Pergoussa and Stroggyli form the Municiplaity of Nisyros. Enjoyed traveling to the beautiful Nissyros or Nisiros Island? Write about it at the linked page.

The beautiful Patmos Island, or as the Italian call it Patmo is one of the northern Aegean Greek Islands and it belongs to the Dodecanese complex in the Aegean Sea. It covers an area of 34,05 square kilometres and it has about 3,044 populations.

The Municipality of Patmos includes the islands of Arkoi, Marathos and many uninhabited islets. The island forms part of the Kalymnos Regional Unit. It has some remains that date back to the Middle Bronze Age. ANcient history of the island beyond this is unknown.

Did you visit it? What attracted you in the beautiful Patmos Island?

The mountainous Aegean Greek Rhodes Island, or Rodos, or Rho in Greece covers and area of 1,400 square kilometers in the eastern part of the Aegean Sea and is considered the largest island in area and population of 117,007 and it has the major tourism industry.

Many beautiful Rhodes beaches attract thousands of visitors every month during summer to the island to enjoy good vacations on sandy, clean and sunny beaches.

The Beautiful Rhodes Island is sunny almost all of the year and it has sandy and still virgin beaches, some historical locations that date back to the Byzantine era and varied landscape from arid and rocky to lush and forested lands.

The Aegean beautiful Tilos Island, or Telos Island is in the Dodecanese group of 150 smaller islands and 12 larger islands in the Aegean Sea.

Its name derives in the Greek mythology from Telos, the son of Helios and Halia. It has high cliffs and valleys walnut, almond and cypress trees.

Some of the islands are well connected with each other by ferries and they stand with historical heritage from the Byzantine and medieval era.

In addition to the 100 beautiful Dodecanese Islands, you may also be interested in the information about other Greek islands below:

Share the 100 beautiful Dodecanese Islands with your social media and other services through the small buttons on this page. Use the following comments form to write about your island, or your city of residence and upload pictures from it. Thanks.