What Secrets Lay Beyond the Arctic Ocean?

The Arctic Ocean has been largely unexplored for most of its history. No one knows great details about it until recently. The lack of knowledge of what lay north of the changing ice barriers led to guesswork, speculation and lingering myths about an "open Ocean" beyond the Arctic.

However, as the explorers came closer towards the North Pole, it was clear that sea ice was indeed massive and permanent all year round.

The following brief is about the North Pole and some of the exploration attempts that tried to the reach the top point of the pole.

If you have more information about North Pole, the mass of ice there or about any existence of animals and birds, please use the form at the bottom of the page to share it.

I have many useful gifts for people who use that from to contribute to this page. Those gifts are good for both reading and using to benefit from them. Thanks. 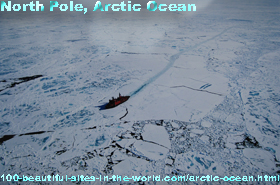 It is estimated that the Arctic Ocean covers almost a circular pole of about 14,056,000 square kilometres at the top of the world. It is surrounded by the landmasses of North America, Greenland, Eurasia and several smaller islands as well.

The Norwegian explorer, scientist, and Noble Prize laureate, Fridtjof Nansen; who was born in 1861 in Store Frøen, near Oslo, or Kristiania as it was called that time, was the first explorer who crossed the Arctic Ocean.

Although he spent more than three years in the Arctic from 1893 to 1896, he never reached the North Pole at the 90 degrees north latitude, but he only reached the 86º, 14 North. At that time it was the northernmost point, a man had ever been.

He was well determined to complete the job, but misfortunately lack of food and drifting ice forced him and his companion to take back to the mainland and this took them two winters depending on shooting walruses for their food until they found a British expedition that took them back to Norway.

It took more than 70 years before a dogsled expedition led by the British polar scientist and explorer Sir Wally Herbert crossed across the frozen Arctic Ocean from Alaska to Svalbard and in April 1969, he reached the northernmost point on the Earth in the North Pole. This epic crossing journey of more than 5,800 kilometres is considered the "last great journey on Earth."

However, many secrets about what exists beyond that remain unknown.

Every summer the ice on the Arctic Ocean breaks up and melts partially. But in the last decade, the global warming resulted in more ice melting on the North Pole in summers and the records of the ice melting caused by global warming has broken all records.

The sea ice cover has pulled back much faster than the records have been projected previously. If this trend continues, the North Pole will be completely ice free in summer by 2013.

The five countries surrounding the Arctic Ocean are Russia, Norway, Denmark / Greenland, Canada and the USA.

Currently, none of those five countries owns the North Pole region. It is believed that the area contains significant oil, gas and mineral resources that estimated to be 25% of the world's petroleum reserves. As ice melts, and the subsoil is available, there may be disputes about who has the right to Arctic resources, and may ultimately provoke a confrontation.

However, it is said that the United Nations organization is concerned and will be the mediator in any international disputes.

Is the Arctic Ocean at the Top of the World?

What secrets lay beyond the Arctic Ocean?

Is it possible to cross the white snow and get beyond it to the end of the Arctic?

What will happen when the Arctic Ocean becomes wetlands in summers?

Well, you can either comment on this article about the North Pole or write your own.

To do so, please use the following form and contribute to this page. It is good idea to leave your email address so you can receive any reply to your comments.

I have some gifts for you too for sharing your words about the Arctic Ocean and the affects of global warming on that area. Thanks.

Search near the Arctic Ocean.


You can also enjoy more activities here indeed if you liked this page about the Arctic Ocean.

I use "Solo Build It" tools at the bar below to empower this page about the Arctic Ocean and the entire 100 Beautiful Sites in the World. Thanks to those strong website building and optimizing tools.