Sagarmatha National Park is a Beautiful Park of Himalayas!

Sagarmatha National Park in the Himalayas part in eastern Nepal is a UNSCO World Heritage Site-Centre since 1979! As a wildlife conservation centre in the northeastern of Kathmandu, it has been into existence since July 1976 and it covers an area of 1148 square kilometres. It is the home of the Sherpa at the head of the sky.

The following lines are about this area and its inhabitants, the Sherpa, in addition the affects of global warming on the area.

If you have more information about this national park, the people, the beautiful sites or any other interesting places in Nepal, please use the form at the bottom of the page to write it.

You will receive some gifts for your contribution to this page. Those gifts are good for knowledge and they could benefit you. Thanks. 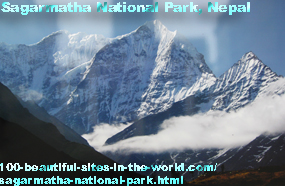 The Sherpa are local people who work in the mountaineering expeditions in the Himalayas and they are known as strong mountain climbers, according to some sources. However, they are "shar pa" in local language meaning east people who are ethnically a group of inhabitant people in the mountain areas of Nepal.

They are cheerful people that are more active and they earn their living from activities in the heights and in Sagarmatha National Park. Their activities include farming, raising their animals, working as porters, working in crafts, and some handimade products for tourists in addition to climbing and assisting climbers.

The Sagarmatha National Park is one of the hundred beautiful sites in the world. As a wildlife sanctuary, the park makes the area rich of colours and different environmental covers of trees and endemic plants such as blue pine, rhododendron, juniper, birch, hemlock and silver fir.

There are also variety of more than 100 bird species such as red-billed chough, yellow-billed chough and danphe.

This wildlife reserve in Solukhumbu District is the highest national park in the world at above 9,700 feet stretching onto three peaks higher than 25,840 feet including Sagarmatha, Lhotse and Nuptse.

The huge masses of inland ice in the Himalayan glaciers are surpassed in size only by the ice mass at the two poles. Melting water from the Himalayas creates the rivers that supply fresh water to one third of the world's population.

With its 8848-meter Mount Everest in the east of the Himalayan chain, is the highest mountain in the world. Nepalese call it Sagarmatha, which means "heaven's head". They also give this name to the exceptionally scenic Sagarmatha National Park.

Almost 6,000 Sherpas, who are local bunch of battle people, living with their unique culture and traditions, also inhabit the entire area.

Over the past decade, two thirds of the Himalayan glaciers have pulled back considerably. Melting ice leads to the formation and rapid growth of glacial lakes, whose banks could collapse and cause floods and landslides that, could have disastrous consequences for the people and biodiversity of wildlife in the region.

Melting of the glaciers is exacerbated by a self-reinforcing process called "albedo effect". When the snow-covered area warms and the ice white surface shrinks, the area will be subjected to more sunlight being absorbed into the ground and that means sunlight will not reflect back into the atmosphere. Instead, the heat absorbed by the soil, which causes the temperature to increase further will in turn melt more ice.

The Himalayan glaciers will probably be gone in 2035, if the current trend in global warming continues. This will cause significant changes in river water flows and shortages of water supplies. Hillsides and valleys are facing destruction, and agriculture, wildlife, humans, and the Sherpas' homes will be seriously affected.

You can comment on this article about Sagarmatha National Park, the Himalayan glaciers and the Sherpa in Nepal.

To do this, please use the following form and contribute to this page. It is good idea to leave your email address so you can receive any reply to your comments.

I have some gifts for you too for sharing your words about any beautiful location on the Sagarmatha National Park and the affects of global warming on those locations. Thanks.

Distance from the Sea!  Not rated yet
Once I was traveling in Mumbai when I took my slippers off and kept my foot on the ground. I felt very hot. So, I asked my mother, "Why is it so, mamma?" …

Search inside the Himalayan glaciers, Sagarmatha National Park and the Sherpa's home or any other beautiful places in Nepal.


You can also enjoy more activities here if you liked this page about the Himalayan glaciers, Sagarmatha National Park and the Sherpa's home. Please share it with your services through the buttons here, at the left column of the page and at the bottom of the page.

I use "Solo Build It" tools at the bar below to empower this page about the Himalayan glaciers, Sagarmatha National Park and the Sherpa's home and the entire 100 Beautiful Sites in the World. Thanks to those strong website building and optimizing tools.