Does Cuba Breathe from Trinidad or Havana?

The historic town of Trinidad, which lies on the southern slopes of the Sierra de Trinidad, in the province of Sancti Spiritus, in central Cuba, is one of the biggest attractions in this Caribbean country.

The town, which located near the Caribbean beach and the Escambray Mountains, is one of the exciting and fascinating towns in the entire Caribbean island.

Pastel-coloured houses with terracotta-tiled roofs, and windows with wrought iron grilles, redolent of the atmosphere that makes the bygone colonial age present, surround the cobblestone streets.

This page is about this exciting beautiful place. If you knew more information about it, please use the form below to add it to this page. You will receive some gifts for your contribution. Thanks. 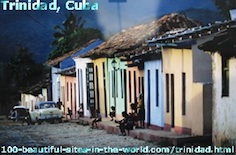 Cuba lies between the Gulf of Mexico, the North Atlantic Ocean and the Caribbean Sea. The Spanish founded their third Spanish settlement in Trinidad in Cuba in 1514 in the south of central Cuba.

The airport is on the way to the coast and the port in the centre of the coastline and there are some beaches such as Ancon Beach few kilometres from the city with taverns at the end of it.

The city lies on the slopes of Sierra de Trinidad and at the back of it is El Escambray with its mountainous landscape. The Spanish architecture dominates the city where narrow streets and cobbled ways run between the buildings in the old city.

There are many attractions in the town or near it such as Santisima Trinidad Cathedral, Plaza Mayor, Playa Ancon, and Municipal History Museum, other different museums, art galleries and waterfalls.

The Museo de la Torre Manaca Iznaga is a tower built by Alejo Iznaga Borrell in 1816 and it reaches 45 meters high.

Topes de Collantes is a nature reserve park and the premier ecotourism center in Cuba. Parque Cespedes is the interesting site of the Valley of the Sugar Mills and has been declared a world heritage site.

In addition to these attractions, there are also the Casilda Bay and the Plaza Santa Ana to the east of the town's centre.

Trinidad, which was founded almost 5 centuries ago on December 23, 1514, by Spanish conquistador Diego Velazquez de Cuellar, spreads nowadays to 1,155 square kilometres and there are 73,466 inhabitants in the town.

Together with its neighbouring Valle de los Ingenios, they renowned for their well preserved Spanish colonial architecture and have been declared UNSCO World Heritage Sites.

The Square Plaza Mayor is surrounded by majestic houses from the 18th and 19th centuries and represents the city's historic center. The once wealthy town belonged to wealthy landowners who served on a large trade scales in sugar and slaves.

Today most of their homes turned into museums and tourist attractions. Thanks to the communist revolution.

Located in the Caribbean Sea at the mouth of the Gulf of Mexico, Trinidad, together with the rest of Cuba, lies in the path of hurricanes.

In September 2008, only ten days after another major hurricane had ravaged the country, Hurricane Ike struck Cuba and damaged nearly 1,000 houses in Trinidad, led to massive landslides, and flooding that cut off roads to and from the town. Throughout Cuba, the two hurricanes caused $7 billion of damage throughout Cuba.

Local government in Trinidad has been able to protect and repair many of the town's historic tourist attractions, other sites and to reinforce many buildings. However, global warming is expected to lead to more extreme weather events in the Caribbean area.

It is not certain that reinforcing of buildings may not be enough to keep pace with the ever stronger and more frequent storms. The future extreme weather events threaten to destroy the colonial heritage of the town as well as the homes of the ordinary citizens.

There are many hotels in the centre of Trinidad and around it towards the coastline such as Brisas Trinidad Del Mar Hotel, Iberostar Grand Hotel, Hotel La Rona, Casa Munoz, Hotel Las Cuevas, Hotel Maria Dolores, Hotel Ancon and Costasur Hotel. See beautiful hotels and beautiful beaches in the second section of the page below the form.

The current Havana area and its natural bay had been the first land visited by Europeans during Sebastian de Ocampos circumnavigation of the island in 1509. Shortly thereafter, in 1510, the first Spanish colonists arrived from Hispaniola and began the conquest of Cuba.

Conquistador Diego Velázquez de Cuéllar founded Havana on August 25, 1515 on the southern coast of the island, near the present town of Surgidero de Batabanó. Between 1514 and 1519, the city had at least two different establishments.

All attempts to found a city on Cuba's south coast failed. The city's location was adjacent to a superb harbour at the entrance to the Gulf of Mexico, and with easy access to the Gulf Stream, the main ocean current that navigators followed when travelling from the Americas to Europe.

This location led to Havana's early development as the principal Port of Spain's New World colonies. An early map of Cuba had drawn in 1514 places in the town at the mouth of the river Onicaxinal, also on the south coast of Cuba.

Another establishment was La Chorrera, today in the neighbourhood of Puentes Grandes, next to the Almendares River. Paseo Del Prado, the final establishment, commemorated by El Templete, was the sixth town founded by the Spanish.

Her work is commonly viewed as an extension of the work of her famous brother-in-law, Cuban anthropologist Fernando Ortiz, who initiated the study of Afro-Cubans and the concept of trans-cultural integration.

Here, Edna Rodriguez-Mangual challenges this perspective, proposing that Cabrera's work offers an alternative to the hegemony of national myth of Cuba articulated by Ortiz and others.

She wrote of Afro-Cubans not as objects but as subjects, and in her writings, whiteness, instead of blackness, is gazed upon as the "other."

As Rodriguez-Mangual demonstrates, Cabrera rewrote the history of Cuba and its culture through imaginative means, calling into question the empirical basis of anthropology and placing Afro-Cuban contributions at the center of the literature that describes the Cuban nation and its national identity.

You can comment on this page about Trinidad in Cuba or write about any other beautiful sites located in this Caribbean island.

To do this, please use the following form and contribute to this page. It is good idea to upload beautiful pictures and leave your email address so you can receive replies to your comments.

I have some gifts for you too for sharing your words about any beautiful location in Cuba. Thanks.

Search inside Trinidad or any other beautiful places in Cuba, the island country in the Caribbean Sea.


You can also enjoy more activities here if you liked this page about Trinidad in Cuba. Please share it with your services through the buttons at the left column of the page and at the bottom of the page.

I use "Solo Build It" tools at the bar below to empower this page about Trinidad in Cuba and the entire 100 Beautiful Sites in the World. Thanks to those strong website building and optimizing tools.