New York's Birthplace is the Battery!

New York's Birthplace is the Battery. That place has a history we don't know much about it. But, here are some lights we shade about it. 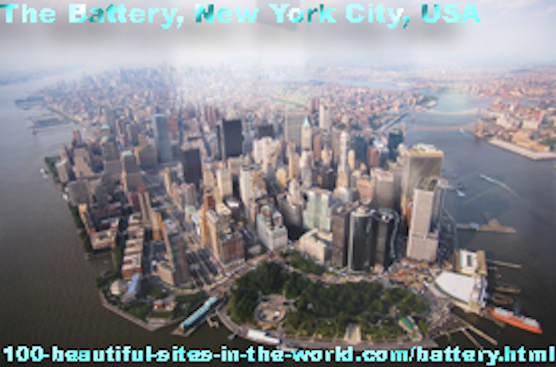 Does The Battery mean anything that indicates an action to beat somebody, or to blow someone?

The city expanded from that point to be a great city with great values in every aspect of life, even in poverty. The Dutch named the city New Netherlands or New Amsterdam and then the name has been changed to New York in 1664.

The following article is not about thousands of attractions in New York like:

It is also not mainly about New York City. (If you have some information about those places, please share it with us through the form, so we could learn more from you.)

It is neither about the high lifestyles of some millionaires nor about the poor lives in the suburbs, downtowns and under the grounds. It is not about the American, Native American or Black American.

More about the Battery!

It is a name of a park in Manhattan facing New York Harbor. But, it is not just a park. It is a beginning of the history of New York City.

It is a part of this great city with all the multiracial identities that made it the starting point of New York. Well, it is better said: it is the heart of this big city... and though not the center.

And here, the Battery makes its entrance to the historical side of the city. The Battery Conservancy has existed since 1994 at the tip of Manhattan to mark NY400 years of heritage shared with the Dutch and its aim is to revitalize and develop the area. However, some people regard it as a symbol of shame.

The big city New York is located in a low-lying tidal area where the Hudson River flows into a naturally shaped port before reaching the Atlantic Ocean. This location near the coast has always played a major role in the city's growth and economy.

Manhattan's southern coastline is known as "The Battery" and has been a popular promenade since the 17 century. The name comes from the artillery battery that the Dutch and the British placed here to protect the harbour in the past.

The Battery is the largest public area in the southern part of New York. Over 280,000 people work within walking distance, and over 36,000 people living in the surrounding neighbourhoods. It is home to the charming Battery Park.

This area is experiencing extreme storm surges approximately once every century, where the water level rises by three feet. Climate change will increase the frequency of strong winds and storms from the northeast and so the sea levels will rise.

In the worst cases, such extreme events of 2080 could occur on average every fourth year with water levels that can rise up to 3, 4, 5 metres and paralyze the infrastructure in Manhattan.

In addition to this pages about the Battery, here are some other relevant pages about beautiful places in the Untied States of America and Canada: Big Sur, Chicago, Kauai, Mississippi River, North Slope, Boreal Forest, Herschel Island, Hudson Bay and Nunavut. You can link to more beautiful places that you don't see on the navigation bar from the Beautiful Site Map here.

You can watch documentaries about the Battery on TVCinemaApp.com.


You can also enjoy more activities here indeed if you liked this page about The Battery, New York, USA.


I use "Solo Build It" tools at the bar below to empower this page about The Battery, New York, USA and the entire 100 Beautiful Sites in the World. Thanks to those strong website building and optimizing tools.