The French actress Sarah Bernhardt, once said: "Chicago, it is America's pulse." She was right, as the city grows to be actually one of the greatest cities in America nowadays.

Chicago, in Illinois, USA was founded in the 1830s on the southeast shore of the great Michigan Lake and close to the Mississippi River. In 150 years, it has been a center of transportation, industry, finance and entertainment in the American Midwest.

This page falls in the category of other beautiful places in America such as the Battery, Big Sur, Kauai and the Mississippi River. You can view those pages from the links here or link to more pages through the Beautiful Site Map

The following article is somehow about this city and the affect of climate change on it. Please add some values to it if you have more information about those beautiful places mentioned here. Thanks. I have some useful gifts for you when you submit this form below. 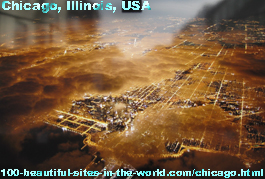 Today the city is the third largest city in the United States. Over 9.5 million people live in Chicago and its nearest suburbs - popularly called Chicagoland.

It is intersected by the Chicago-River, which flows through the central urban area and whose widths are now dominated by modern architecture and futuristic skyscrapers.

Known as a Mecca for music, film, theatre and culture, Chicago is also a melting pot of descendants of immigrants from many places on Earth and especially those Native Americans who flew by the Mississippi River to the north. They gave the city the essence of its black beauty.

The city's most famous son (although he was not born there) is the American President, Barack Obama and it is also the birthplace of his wife, America's First Lady, Michelle Obama, but it also has been a base for the celebrities of the notorious gangster boss Al Capone. Besides, Chicago attracts 45 million tourists each year.

The city was also the inspiration place for many writers, novelists and poets such as Richard Wright, as he arrived to it in December 1927.

It reflected invaluable images to touch him with the desire of writing as he engaged in many activities, joined the communist party, wrote his radical poems, became a principal organizer in the party, worked a literary adviser and press agent for the Negro Federal Theatre of-Chicago, did journalism writing articles to journals and published "Big Boy Leaves Home".

He actually left the city for New York to pursue his career as writer in May 1937.

The city was also the birthplace of the American film producer and the creator of the children's shows, Walter Elias Disney, known as Walt Disney in 5 December 1901. It is also home to other politicians, great celebrities, stars and writers.

Among those characters is Hillary Diane Rodham or Hillary Clinton, the United States Secretary of State, who was born in the city in 26 October 1947, actress Raquel Welch who was born there in 5 September 1940, and the American writer and novelist Ernest Miller Hemingway who was born in Oak Park, Illinois on 21 July 1899.

With its network of 97 kilometres of underground freight railway, which covers much of the central city, and highways connecting the city with other key cities in the Midwest, Chicago is still an important transport hub.

Over the past 30 years, the city has experienced an average temperature increase of 1.5º C. In 1995, the severe heat wave killed 700 citizens.

During 1986, 1996 and 2008 the city was hit by severe flooding due to torrential rains that closed the highways and the railways and destroyed roads and bridges and flooded properties in large parts of the city.

Through the rest of the 21 century, Chicago will experience a gradual increase in both heat waves and floods caused by global warming. Long summers and heavy rain can have serious impacts on both infrastructure and transport system and the influx of tourists.

At the end of the century, the climate in the entire area of the city may change to remind people of what had happened in the southern states, Texas and Alabama at the beginning of the century.

In addition to this page about Chicago, here are some pages about other places in the United States and Canada. Battery, Big Sur, Kauai, Mississippi River, Boreal Forest, Herschel Island, Hudson Bay and Nunavut

Are you living in Chicagoland or the suburbs? Please use the following form to write what you know about this great city. You can write about those beautiful places and attractions mentioned here if you have enjoyed some of them too. I have some useful gifts for you when you finish submitting this form. Thanks so much.

Search inside Chicagoland, Illinois, USA, and the entire American states.


You can also enjoy more activities here indeed if you liked this page about Chicago, Illinois, USA.

I use "Solo Build It" tools at the bar below to empower this page about Chicago, Illinois, USA and the entire 100 Beautiful Sites in the World. Thanks to those strong website building and optimizing tools.