Perth is a Green Metropolis in Australia!

The city of Perth in southwestern Australia is one of the most isolated metropolises in the world. It is located on the edge of the desert and this could possibly be one of its uniqueness. The nearest large city here out of the area lies more than 2,000 kilometres away. There are nonparallel cities in the continent like it.

The following lines cover the city. However, if you know more about it, please use the form at the bottom of the page to write about it. Thank you so much. 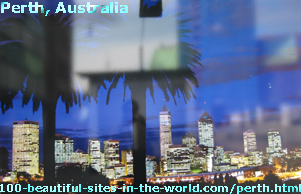 Some people know the city for its luxurious parks and gardens and for its lush green lawns and open spaces, although it lies on the outskirts of a large desert and semi-arid shrub area and has one of the driest climates in the world.

The Australians built those beautiful luxurious parks and gardens accordingly to resemble the European style. So, this gives the city a marvellous beauty.

Such opulent greenery is possible because of the geological peculiarity of the area. The city lies above a huge aquifer that has water since 40,000 years. The aquifer has traditionally been the main source of drinking water in the city and it give it a unique geological formation.

Perth is the only Australian city that depends on groundwater. Therefore, it uses more water per capita than any other city in the country.

Over time, surface water stored in reservoirs has supplemented the aquifer. Perth's population of 1.7 million is more than double what it was 30 years ago. Therefore, per capita water consumption has risen up by more than 20%, putting severe pressure on its water reserves.

During the same period, the city experienced a dramatic reduction in rainfall due to global warming, which has reduced the surface flow into water reservoirs by 65%. Now all that has happened means there is further pressure on the non-renewable aquifer source.

Famous parks and green areas in Perth have not suffered during this process, and about 50% of all fresh water consumed in the city is now used in its gardens.

During the next 40 years, the temperature in the area will rise according to some expectations by up to 2.7º C due to global warming. This will in turn increase evaporation speeding up from soil and plants.

In the same period, rainfall will decrease by up to 40%, while the population will continue to grow by 3% a year. These new parameters will demand a radical new attitude to water consumption in the city.

A wind-powered desalination plant for turning seawater into fresh water opened in 2007 and it provides now 17% of water needs in Perth. It is nowhere near enough, of course, and unless drastic changes are on the way, the city could face severe shortages of fresh water.

Well, if you have more information about this city from different angles, please use the form below to contribute to this website. Thanks so much.

It is also lot of fun and pleasures to share this page about Perth, Australia with your services through the following two buttons. You can use the buttons at the down left column beyond the navbar and on the bottom of the page as well. Many thanks here too.

This page about Perth, Australia is empowered by "Solo Build It" at the bar below.