Panama Canal in the Republic of Panama is one of the largest canals in the world. The first attempt to build the canal was made by the French diplomat and the developer of the Suez Canal's project Ferdinand de Lesseps who achieved building the Suez Canal in the years between 1859-1869.

The following article is about this canal in the Republic of Panama and the affects of global climate change on the area.

If you have more information about the canal or these beautiful sites it crosses or any other interesting places in the Republic of Panama, please use the form at the bottom of the page to share it.

You will receive some gifts for your contribution to this page. Those gifts are good for knowledge and they could benefit you. Thanks. 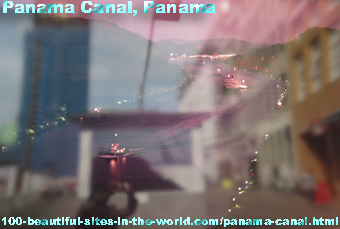 The designer of Eiffel Tower, Alexandre Gustave Eiffel involved in 1887 in the French efforts to build the canal as well. The construction of Panama-Canal started in 1878.

However, construction of Panama Canal failed due to technical difficulties and tropical diseases in addition to insufficient capital to finance the complete project and financial corruption.

After the French failed attempt in 1893 to build a passage between the Atlantic and the Pacific oceans, through Columbia's province of Panama, the United State of America finally managed to build a canal through Panama in 1904-1914.

A wonderful project that make many sources describe it as one of the greatest engineering projects in the 20th century and one of the wonders of the modern world.

In addition to the mentioned name in this great achievement, George Washington Goethals, an American civil engineer and army officer, managed the supervision of construction duties in the project.

It is said that the idea of building the canal have emerged the first time in 1534, at the time when the Roman Emperor and King of Spain Charles V (fifth) thought of an easy and fast way to his territories in the area, which covered the area Peru and Ecuador are covering now.

However, as ordinary forgotten people do every great work like these achievements through history up to this moment, ordinary people among whom many of them lost their lives, without seriously being rewarded, have built the canal.

Estimates say that total of 27,500 workers died during the course of landslides or by diseases such as malaria and yellow fever, while they conducted one of the world's greatest historical achievement and one of the most difficult engineering projects.

When Panama Canal opened in 1914, it revolutionized the shipping industry, which has now escaped the long and exhausting trip around Cape Horn at the southernmost tip of South America.

The new waterway between the two oceans and through the Caribbean Sea has reduced the journey from New York to San Francisco from 22,500 kilometres to 9,500 kilometres. Now approximately 4% of all world trade passes through the canal. Vessel traffic is now the main industry in Panama.

Panama Canal is not filled with seawater, but with fresh water flowing in from 17 paired artificial lakes. The water runs into a series of locks to make the ships gradually rise to nearly 26 meters above sea level.

According to this consumption, Panama Canal uses triple times as much water per day as the entire Los Angeles.

Carriers and shipping companies are building ever larger ships, and therefore there is a planned expansion of the Panama Canal to five billion U.S. dollars, which will be completed in 2014 on the Canal's 100 anniversary.

The expansion of the canal will increase the amount of water consumption significantly. Already in recent years, water shortages made it necessary to close the canal several times.

The shortages are due to the decrease of rainfall that feeds the lakes. The question now, is whether there is enough water for even a trace.

In the future, it is expected that El Nino events will increase as a consequence of global warming. Rainfall patterns will change, and there will be prolonged droughts, which will reduce the water resources of Panama Canal even more.

This may ultimately interfere with ship traffic around the world and have serious consequences for the economy and the people of Panama.

What will happen if Panama Canal closed forever?

How They Could Save Panama Canal from the Impacts of Climate Change?

You can either answer the questions or comment on this article about Panama Canal.

To do so, please use the following form and contribute to this page. It is good idea to leave your email address so you can receive any reply to your comments.

I have some gifts for you too for sharing your words about any beautiful location in the Republic of Panama and the affects of global warming on those locations. Thanks.

Search inside Panama Canal in the Republic of Panama.


You can also enjoy more activities here if you liked this page about Panama Canal. Please share it with your services through the buttons here, at the left column of the page and at the bottom of the page.

I use "Solo Build It" tools at the bar below to empower this page about Panama Canal and the entire 100 Beautiful Sites in the World. Thanks to those strong website building and optimizing tools.