The Beautiful Syros Island or as it is also written Syra and Siros is one of the Beautiful Greek Islands on the Aegean Sea. It was known as Sire in the past. It lies southeast of Athens on the clean blue area on the Aegean covering 101, 9 square kilometres. It has 19,782 people living there.

Its lovely beautiful beaches, described by somebody I know circle the island and make it busy during the hot tourism season. 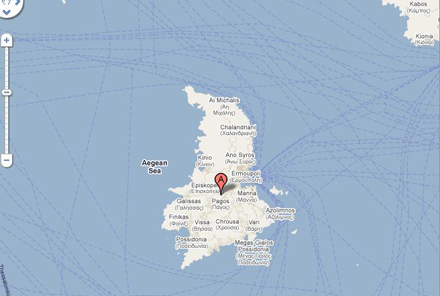 Getting this information from him, I searched for some travel guides to Greece and Turkey.

I found two books and enjoyed reading them to know more about these beautiful islands on the Aegean Sea.

I found those travel guides very useful. You can get them on the links below "Useful Resources". 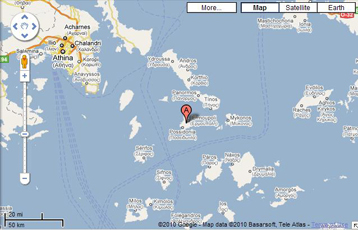 The Beautiful Syros Island is not only the maritime and the commercial centre on the Aegean and the eastern Mediterranean, but it became the legislative and the administrative centre of the Cyclades group as well.

The island does not depend on tourism in spite of all pleasant beaches, but its economy drives from diary farms, textiles and horticultural industry. The people engaged in making ships in the past, but the shipbuilding declined.

Hermoupolis or Ermoupolis is the former older name of Ermoupoli, the port and the capital city of the island and the Cyclades. It was named after the God of commerce, Hermes.

There are classical buildings and old mansions in the city. The commercial centres are along the central streets. Miaouli Square or Plateia Miaouli is not far from there with its palm trees, cafés and bars.

Near the Town Hall where the Miaoulis Square lies, there are cafes and seating areas under the palm trees. The municipality has two museums, the archaeological museum from the year 1834 and Ermoupolis Industrial Museum.

There are old houses in the surroundings in addition to numerous churches, narrow streets and the municipal library. The wealthy people and the sea captains live in the quarter of the town called Vaporia.

The medieval settlement of Ano Syros is the city of the white houses. The Venetians built Ano Syros the second town in the 13th century on the hill of San Giorgio northwest of Hermoupolis. Their time ended in 1537 when the Ottoman occupied it.

When the Catholic basilica of San Giorgio dominates Ano Syros, they built the church now remains in the area. When you get to the heights, you can see the neighbouring islands of Tinos, Delos, Mykonos, Paros, Andros and Naxos. The Ottoman occupied it in the 16th century.

The Beautiful Syros Island is surrounded by other islands as Kea, Kythnos and Seritos at the west, Andros at the north, Nisos and Tinos at the northeast, Mykonos at the east and Paros and Naxos at the southeast, thanks to Google Maps too.

Just from the first look to the map of Syros, you will have an impression that many towns and villages cover most of the island and many beaches round it.

From Cape Diapori and Cape Trimeson at the tip north of Syros, towns and villages with sandy beaches round the island and many other villages occupy the entire landscape. However, most of the beaches are at the south and at the west of the island.

Azolimnos Beach lies at the southwest and Vari Beach and Megas Gialos Beach lie at the south. Beaches at the west part of the island from the north to the south include, Grammata Beach, Lia Beach, Aetos Beach, Delfini Beach, Armeos Beach in Galissas Bay, Posidonia Beach in Finikas Bay and Augathopes Beach.

Ai Michalis, Myttakas and Papouri lie at the north and Chalandriani at the northeast. The towns and villages at the east are Ano Syros, Vrodado, Ermoupolis, Lazareto and Manna.

Ferries connect it with many ports in the neighbourhood and far from it.

There are some hotels on the beaches south of Galissas: Angathopes, Finikas, Posidonia, Megas Gialos and Kini at Vari Bay.

The Greek Islands, including the Beautiful Syros Island have long been one of Europe's favorite holiday destinations. It's hardly surprising: with more than 1400 islands scattered around the blue waters of the Aegean and Ionian Seas, there's something for everyone.

For some it's the opportunity to explore the remains of some of Europe's oldest civilizations. For most people though, the greatest attraction is the lure of sand, sea - and more than 300 days of guaranteed sunshine a year.

The Cyclades: Discovering the Greek Islands of the Aegean

The Cyclades are the quintessential Greek isles, renowned for the beauty of their seascapes, their historical monuments, and a unique way of life deeply rooted in the remote past of the Aegean.

Over the course of more than 7,000 years, the Cyclades, including the Beautiful Syros Island have seen a succession of civilizations, the earliest of them perpetuated in legends such as that of Atlantis, which has been identified with volcanic Santorini.

The islands are arrayed around their sacred centre on Delos, where Leto was said to have given birth to the divine twins Apollo and Artemis, children of Zeus.

You will find the Beautiful Syros Island included in the first guide, which I read recently.

A powerful and unique study of the realities and long-term impact of occupation, Mussolini’s Greek Island reveals the Italian dictator’s imperial vision, the mechanisms of Italian occupation and its tragic consequences.

Read about other beautiful islands on the Aegean Sea at Beautiful Imbros Island and Beautiful Tenedos Island.

If you found the information about the Beautiful Syros Island useful, please share it with your social bookmarks through the buttons on this page. You can also forward it to your friends through the link at the right top of the page. Thanks.

Did you know more about beaches, hotels, tourists' attractions in the Beautiful Syros Island? Use the form below to write about them and upload beautiful pictures too. Thanks.

Solo Build It on the image bar at the bottom empowers Beautiful Syros Island and the entire 100 Beautiful Sites in the World.