People call the Altai Mountains... sorry the Russian parts of the heights of Altai the Golden Mountains.

Are they made of gold and appear in reality from the historical myths in pure gold glimmering on the horizon?

No... and this is well seen from the past the story of the heights tells us. And yes, because although they are not in gold, but they are invaluable by what they contain.

So, the description is sufficient and people apparently describe them that way for a good reason.

They do that, because they hide the world heritage of the past, where they show the ancient culture of the Scythians and reflect it through invaluable remains and other resources. 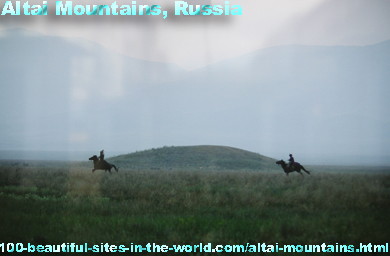 Altai means "Golden Mountain". The name is in Turkic as Alytau or Altai. The starting "Al" means gold and the ending "tau" or "tai" means mount. and the given name reflects appropriately to describe an area that contains invaluable nature and a great cultural value.

The following article is about these mountains in Russia, their cultural importance and the affect of global changes on the area. Environmental sources say, after the projected temperature rise, all the golden past will sweep away.

If you have more information about the topic of the page or the Altai Mountains in Mongolia, China and Kazakhstan, please write it through the form below. I have good gifts for you when you contribute to this page. Thanks.

They expand for almost 1,200 miles and they are the highest mountains in Siberia. The highest peak in the mountain range, Belukha reaches 15,157 feet high.

The Altai Mountains begin where Russia, Mongolia, China and Kazakhstan meet. The Russian side of the mountain range is on the UNESCO's World Heritage List because of the diversity of vegetation, which varies from steppe to mixed forest to alpine vegetation.

The mountains are the source of many rivers such as the Ob River, Katun River, Yenisei River, Belokurikha River, Lena River and the Irtysh River in Russia and the Buhtarma River in Kazakhstan.

River Biya begins from Lake Kutsherla in Altai-Mountains and runs near Kebezen town, Biysk town; in the Biysk Region of Altai, the last station the train reaches and Sorokino (named Crasnodon in 1938); the centre of coal mining in Donbass.

Through the Sayan Mountain in the east, it extends to the southeast and then becomes lower to merge in the high plateau in the Gobi Desert.

The Scythians occupied the lands that stretched from the Black Sea to the Mongolian Plain. They lived as peasants and warriors and fought against rival tribes with their notorious poison arrows with barbs. Women, probably young and unmarried, fought alongside the men and wore the same clothes.

In the Altai-Mountains in Central Asia, you will find the 20-metre high funeral sites so-called Kurgan, which lies along the southern Siberian steppe.

Some armaments used by the nomads in the Altai Mountains area during the first century BC were found in 2005.

The archaeologists in Russia have found in 2007 remains of a warrior related to 2000 years back in history in the permafrost of the Altai Mountains.

As the only frozen tombs in the world's permafrost preserved kurgans in their original state. The graves testify to the Scythian tribes, a horse-riding nomadic people who dominated the Eurasian steppes in the first millennium BC.

Studies of Kurgan-graves have revealed gold arty-facts, weapons, animal sacrifices and sometimes human sacrifices, which were preserved in perfect condition.

Organic materials such as silk, wool, leather and mummified human bodies were intact. In one tomb, archaeologists found a beautiful tattooed corpse of a woman wearing a silk blouse, which was later nicknamed "The Ice Maiden".

The key to the Scythians culture lies in the golden mountains frozen graves. Many of kurgans are located in an area the permafrost, which makes them highly vulnerable to rising temperatures.

In the past 100 years, temperatures rose between 1º and 2º C. In the middle of this century, it is expected that temperatures will even rise more frequently to higher levels, which will probably result in a significant reduction in the permafrost.

Many species are endangered in this condition among them are the snow leopard, black stork, golden eagle, snow cock and the wild cheep of the Altai.

If the permafrost melts, a unique cultural heritage will also disappear.

The Ob River also Obi, is a major river in western Siberia, Russia. It is the country's fourth longest. The Ob River also has the longest estuary in the world. The Ob is formed 16 miles (26 km) southwest of Biysk in Altai Krai by the confluence of the Biya and Katun rivers.

Both these streams have their origin in the Altay Mountains, the Biya issuing from Lake Teletskoye, the Katun, 80 miles (130 km) long, bursting out of a glacier on Mount Byelukha.

The Ob zigzags west and north until it reaches 55° N, where it curves round to the northwest, and again north, wheeling finally eastwards into the Gulf of Ob, a 600-mile (970 km)-long bay of the Kara Sea, which adjoins the Arctic Ocean.


In addition to Altai Mountains in Russia, there are some other beautiful places in this great country such as Bering Sea, Lake Baikal, Siberia and Yamal Peninsula. You can comment or write about any of those beautiful places on the pages above and get more gifts.

Help us correct any wrong information on this page or bring more information about this topic.

You can either comment on this article about Altai-Mountains called also the Golden Mountains in Russia or on those mountains in China, Mongolia and Kazakhstan or about the Scythians and their Kurgan or write your own.

To do so, please use the following form and contribute to this page. It is good idea to leave your email address so you can receive replies to your comments.

PLEASE BE ASSURED, no one of the commentators will capture your email address. It is only that the system that will send you notifications about replies to your comments, as this process is automated. Thanks to SBI 2.0 for making interaction with nice visitors like you possible.

Search inside Altai Mountains called also the Golden Mountains in Russia or on those mountains in China, Mongolia and Kazakhstan or you can search for more information about the Scythians and their Kurgan.

You can also enjoy more activities here indeed if you liked this page about Altai-Mountains called also the Golden Mountains in Russia or on those mountains in China, Mongolia and Kazakhstan or about the Scythians and their Kurgan.

This could be also additional value to you, as you could experience some social networking technologies and know more. Click on "Enjoy this page?


Please pay it forward" at the bottom to know how to link to the website.

I use "SBI" tools at the bar below to empower this page about Altai Mountains called also the Golden Mountains in Russia, the Scythians and their Kurgan and the entire 100 Beautiful Sites in the World. Thanks to those strong website building and optimizing tools.