White Snows on Kilimanjaro, the House of God!

People in Africa and may be in other continents knew Mount Kilimanjaro by its height (19,331 feet), its people the Serengeti Mara and by its snow cover since long time ago.

They knew the mountain even before the American novelist Ernest Hemingway wrote his novel "The snow on Kilimanjaro" in 1936.

Some sources say that the world knew this fact, only when the American writer wrote his novel about it. Well, that is absolutely not correct at all.

This point of view is arguable, because pioneering volunteers in the European expeditions have visited the area before that date and written about it.

Use the form on the page to defy the argument, or to write about this topic, its people and its nature and other facts you know about the area. Upload pictures, when you did that. 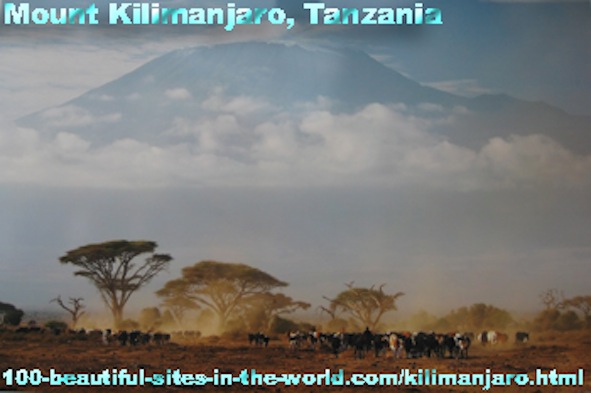 Here are some evidences to defy that argument. On 11 May 1848, the missionary John Rebmann, one of the protestant pioneers in the Church Missionary Society saw the snow on the mountain and then wrote in his notebook about the people who also have knowledge about this fact.

Even before that time, the African nationals, especially those who live in the area, or near it knew about the area more than any other people. Their myth tells many stories about it. The daily facts keep them constantly pursuing their life to meet the tough living conditions.

The following article is about Kilimanjaro Mountain. If you have more information about it, the people in the area, the nature or the country, please share it through the form below. I have some gifts for you when you contribute to this page. Thanks.

The Wachagga people call it "Kibo" meaning snow and they describe it as shinning. In Swahili, "mwalima" means mountain while "ngara" means shine. They all together mean the shinning mountain.

Educated people by tribal myths or modern knowledge knew that the snow cover the mountain. Some of them know more about the fact that ice is not limited to cold climates on the well-known iced areas in the world.

However, Mount Kilimanjaro lies across the borders between the neighbouring countries in east Africa, Kenya and Tanzania and was on the British protectorate since the 1840s until the independence of those countries.

The entire area from Mombassa to Mount Kilimanjaro was under the protection of Sultan Zanzibar during the 1840s. However, the British controlled the area from the coast to the German East Africa afterwards and even added Uganda in 1902.

The mountain was in the British territory before the demarcation of the borders, although some sources argue that mountain to be completely in Tanzania. If you knew more facts about this mount, please share it on this page to correct any wrong information on it.

The colonial authorities redraw the line between Tanzania and Kenya when Queen Victoria gave Kilimanjaro to her cousin Kaiser Wilhelm the king of German as a gift on his birthday.

Sources that argue this point say that story is fabricated, assuming that the borderline is strait line broken only by an untidy curve around Kilimanjaro.

That was happened according to some stories when the Kaiser complained to the queen that she has two (snows) meaning on Mount Kilimanjaro and Mount Kenya, while he has none.

In that area of eastern Africa in particular, the local Masai tribes living on the plains below the mountain have their own legend about it for hundreds of years and they call it "Ngaja Ngai" in their language, meaning "God's house".

This brings some educated people in the area to know more about the ice at the top of the mountain. Read more about those people here at Serengeti.

Down from the plains, Kilimanjaro is halfway up dressed in a ring of fog and clouds that protrude through the top and appear from the lower wooded slopes.

The snow at the top began to melt slowly since the time Hemingway described the mountain. Almost 80 % of the ice cover melted because of global climate change in the years between 1912 and 2003.

The rest of the dwindling ice cover will be gone by 2020 according to the expectations of the global warming experts.

The actual loss of snow at the top of Mount Kilimanjaro will only have a limited impact on the ecosystem, as it only provides water for a few small streams.

However, it will have a great symbolic power, because it illustrates to the world how fast the climate is changing. This is what makes every activist concerned about the area.

The heavy clouds, whose vapour and precipitation water the "Cloud Forest" and the rivers down the hill have already started to decline because of rising temperatures and shrinking atmospheric humidity.

This trend has already led to more frequent forest fires and it will probably continue. Together with the anthropogenic deforestation, the trend would further reduce the precipitation from mist and clouds.

All this may end up having a devastating impact on both the forests and the water supply for millions of the Chagga and the Masai people on Kilimanjaro low-lying slopes.

Use the form below to write about Mount Kilimanjaro or anything that you know on the area. I have some "gifts" waiting for you when you contribute to this page. Thanks.

The White Massai (Die Weisse Massai) movie, starring the Swiss stars Nina Hoss and Jacky Ido and directed by Hermine Huntgeburth is about love story between …

The life of the Massai is very simple. The following movie presents some of it, which in some details is very natural. The traditional way of living …

It is good to subscribe to the Beautiful Scene Newsletter to update you about beautiful places in the world and some other relevant deals.

You can also enjoy more activities here indeed if you liked this page about Mount Kilimanjaro in Tanzania.

Please share it with your social media services through the buttons at the top, or at the bottom of the page.

This could be also additional value for you, as you could experience some social networking technologies and know more. Click on "Enjoy this page? Please pay it forward" at the bottom to know how to link to the website.

Everything about Africa at Amazon

Comments on Kilimanjaro appear at the second section of the page above these paragraphs and below the comments form.