Ice Melts in the North Slope!

The huge North Slope region is the northernmost part of Alaska and is a major permafrost zone. It lies north of the Arctic Circle on the northern slope of the Brooks Range, spreading to 89,000 square miles from the Chukchi Sea at the west of Point Barrow to the Beaufort Sea at the east.

The North Slope is one of the beautiful sites on this website and it is included in a category with other beautiful locations in the United States of America and Canada. You can use the Beautiful Site Map to view other beautiful places on the planet.

If you have more information about this beautiful place in the world, please use the form below to write it. You can write also about the other places on the relevant pages through the links on the sitemap or through the links below. Thanks. 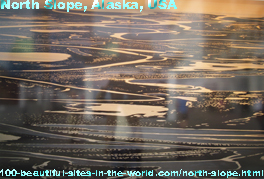 The North Slope is covered with forests and tundra and intersected by winding rivers such as Colville River; a 360 kilometres long, Sagavanirktok River; a 180 miles long, Kuparuk River; 140-180 kilometres long and Killik River, some of which flow from the Brooks Range and into the Beaufort Sea, which is part of the Arctic Ocean.

Some lakes such as Nuwuk Lake, Teshekpuk Lake, North Meadow Lake, and Grayling Lake fall in the area. Although it is the size of Britain, so it only has a resident population of 7,300 people. This is a region in Alaska State in the United States called also the Arctic North Slope.

Besides its magnificent nature and wildlife, including caribou, polar bears and arctic foxes, the North Slope is also the biggest oilfield in North America.

In regards to the animal and bird species there are 125 bird species that migrate to the North Slope such as peregrines, pintails, black brant and gyrfalcons, in addition to 10,000 bowhead and 30,000 beluga whales and polar bears and 700,000 caribou calves on the coastal areas.

As for oil, the North Slope contains one of the United States' deposits of natural gas and also oil reserves that reach up to 48 billion barrels.

Five thousand migrant workers are employed at Prudhoe Bay on the edge of the Beaufort Sea, where they produce 650,000 barrels of oil per day. From Prudhoe Bay, the oil transported through the Trans-Alaska Pipeline System, across Alaska to the port city of Valdez in the south.

The melting permafrost poses a serious threat to the region. The so-called active layer of permafrost freezes in winter and dries up in summer, and sustains the basis of vegetation, usually grows from a few centimetres to about one meter deep.

Over the past 25 years, rising temperatures have warmed the permafrost, and the active layer is now deeper and it has eaten into the permanently frozen layer of ice, soil, rocks and organic material, which is the foundation for the entire area's natural stability.

A further increase in temperature due to global warming will probably extend the active layer and slowly dissolve the permanently frozen ground.

In addition to this page about The North Slope, Alaska State, USA here are some pages about other places in the United States and Canada. Battery, Big Sur, Chicago, Kauai, Mississippi River, Boreal Forest, Herschel Island, Hudson Bay and Nunavut

Are you living in the North Slope, Alaska State, USA? Please use the following form to write what you know about this area. You can write about those beautiful places and attractions mentioned on relevant pages as well if you have enjoyed some of them too. I have some useful gifts for you when you finish submitting this form. Thanks so much.

Search inside The North Slope, Alaska State, and the entire American states.


You can also enjoy more activities here indeed if you liked this page about The North Slope, Alaska State, USA!

I use "Solo Build It" tools at the bar below to empower this page about The North Slope, Alaska State, USA and the entire 100 Beautiful Sites in the World. Thanks to those strong website building and optimizing tools.