County Meath, the County of Potato in Ireland!

Ever since the earliest times, County Meath has been the focus of Irish History. Informally, it is often referred to as "The Royal County", but it actually means the "county in the middle".

Some of its burial sites are dating as far back as 3,500 BC. From the 8th century, the High King of Ireland often hailed from the Kingdom of Mide, as it was called at the time. The largest Anglo-Norman castle in Ireland, Trim, was built there in 1176.

The following short article is about this Irish county and its natural resources. If you found it useful, please share it. If you know more information about it, or if you had seen the beautiful site of the county, use the form at the bottom of the page to write about it. Readers of this page will thank you for your contribution. Thank you. 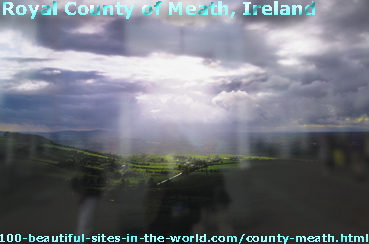 Blessed with its fertile soil and strong agricultural tradition, County Meath today is Ireland's leading producer of potatoes - or "earth apples", as they are sometimes called. Historically, the potato has been closely associated with Ireland's farming resources.

When it was first brought to Ireland from South America in the 1600s, it quickly became an important part of the Irish diet. On average, a male farm worker would consume 6-7 kilograms of potatoes a day.

In 1845 and subsequent years, Ireland was hit by a potato blight. The potato pest, led to widespread famine. In a single year was two-thirds of the potato crop lost, and 1.5 million people died of starvation or famine related diseases in only 5 years between 1846 and 1851.

During the same period, more than a million people immigrated to the US and many others left for Britain, Canada and Australia.

Today, the 4.4 million inhabitants in the Republic of Ireland consume an average of 87.5 kilograms of potatoes per person per year.

Over the next 45 to 65 years, the average summer temperatures in Ireland are projected to rise by 2.5-3.5º C, and precipitation in summer and autumn to decline by 25% due to global climate change. In some eastern parts, where County Meath is located, rainfall may decline by more than 40%.

Such climate change could cause a drought, which may mean that, the potatoes as a commercially viable crop in most parts of Ireland, especially in the eastern regions will not continue to be the main diet in Ireland.

Have you been in County Meath or any beautiful place in Ireland? Do you know more information about Ireland? Use the form below to share it on this page.

If you found this page about County Meath, the County of Potato in Ireland useful, please share it with your services through the buttons below, at the left column of the page and at the bottom of the page. If you do not have a service there, register for one and enjoy this kind of technology and social networking experiences. Thank you.

"Solo Build It" at the bottom bar empowers this page about County Meath, the County of Potato in Ireland and the entire website.