There are less than 100 beautiful Sporades Greek Islands along the Pelion Peninsula, but more than 100 of excitements you can live on any of these group of islands, if you decided to travel for vacation to one of them.

The beautiful Sporades Islands are very near from the mainland of Greece. You can get to any of them through the mainland nearby and see other islands in the neighborhood, while traveling in your holidays. From international locations, you'll find some laissez faire here.

The Sporades are basically the group of islands on the beautiful Aegean Sea at the northeast of the mainland of Greece. At the east of this group is another Aegean Greek Islands group you can read about at 100 beautiful Northeastern Greek Islands. 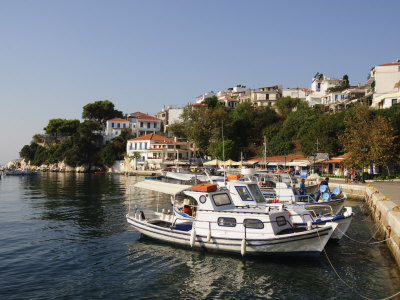 Sometimes the definition limiting an island to belong to a group is very decisive, as some neighboring groups converge into each other. In addition, some islets lie in line between some groups of islands.

For instance, some of the mentioned islands above are in fact in the north and northeastern group of islands. But, even the geographic definition is sometimes incoherent, something you'll notice when you browse the 100 beautiful islands of the Sporades and the other groups.

The beautiful Island of Alonissos or Alonissos is one of 24 inhabited and uninhabited islands in the Sporades group of islands on the Aegean Sea. It is off the eastern coast of Greece, at the east of the islands of Euboea and Skopelos (the gate of the wind) and very close to the mainland of Greece.

As one of the Aegean Greek Islands, Alonnisos is also considered the most beautiful island, with outstanding hospitality and it has beautiful nature with dreamy atmosphere.

The beautiful Skiathos Island is one of the small islands in the Sporades group of islands. It is about 50 square kilometers in size. But, it has more than 20 beautiful beaches, some of which are secluded beaches and reached only by excursion boats from the capital city of the island.