Gujarat is a Prosperous State in Western India!

When I hear or read the word Gujarat, I feel like having (chapatti, or chapati, which is sort of roti or Indian soft bread) in my breakfast in an Eritrean capital city's suburb called Gujarat too.

However, I spent ten years of my life in the second suburb not the first place in India. I will love to visit this west state in India I read about in the past while going through Mahatma Gandhi's great life of wisdom and struggle.

That is simply, because I love India since my childhood, at the time that I impressed by many Indian films, the way Indian dress in their national dress, the way they talk in their local language and their simplicity in doing anything.

The following article is about this state in India and the affect of global climate change peppered by some personal thoughts in a hot Indian dish.

If you have more information about any topic on this page, please use the form below to bring it in, in details and get some useful gifts. Thanks. 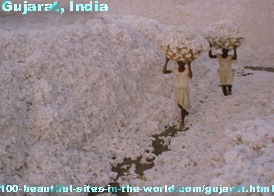 That was at the time the Indian nationalism was great working all in the big country, in unity and under one strong government lead by Pandit Jawaharlal Nehru (1889-1964), the first Prime Minister of independent India and one of the 5 great leaders of the non-aligned countries.

That was also at the time the unity between Muslim Indian (Indo-Muslim) and Hindu was preserved. Read more politics at the HOA's Political Scene here.

Indians engineers had been with their families in Al Jinaid, the first sugar factory in Sudan and the Indian small community used to come for shopping in my city where my father had the first store in the city and have a name that was much like Pier Cardin, the French veteran fashion designer in the city;-)

After couple of years, Indian telegram and telephone engineers came to the city to enhance the infrastructural lines of the telecommunication. I befriended some of those engineers and heard about Gujarat from them as I remember some of them were from there.

However, I lost great deal of information during a long period of travel outside my country.

The western Indian state of Gujarat borders the Arabia Sea and it was independent kingdom starting from 1401 until the annexation of the Mogul Empire in 1572.

The area is rich of mangroves that run in ranges from the east coast where the mangroves of west Bengal spread. Here are two pages about Bayan Olgii in Mongolia and Ganges Delta in Bengal.

While the British colonization dominated India and Sudan where Kordofan lies, nearly at the same period, the British imported Neem trees called by the plant scientific name Azadirachta indica, which is one of the mahogany family of Meliaceae, from north Delhi in India to Sudan.

That tree has self-defending system through which it produces poisoned liquids to kill the insects that feed on its leaves like mosquitoes and locusts. It grows very huge to provide shades in the warm weathers for people to rest under it. Its roots spread horizontal under the ground.

Such symbolic ties tie many cultures in Sudan with that in Gujarat or in India as a whole. Things like henna, which is women's tattoos and sandal, which is wooden perfume, other perfumes made in India for henna are all well known and almost all Sudanese women use them.

These products symbolize also the traditional way of marriage that seems in many cases like the Indian's marriage ceremonies in Gujarat or elsewhere in India except for the religious part of those ceremonies.

However, the following lines about Gujarat State will cover a specific topic about Gujarat, which is one of the most industrialized states in India after Maharashtra and one of the fastest growing economies and modern areas in India.

In addition, 55 million people live in the state out of 1,170,000,000 in the entire country and the state has different productive sectors, which are open to new jobs in Gujarat, and the area attracts tourism as it has many tourist attractions.

The most western state of Gujarat in India is the country's largest producer of cotton and salt. The state was the spot where Mahatma Gandhi, the political and spiritual leader of the Indian independence movement was born.

Mohandas Karamchand Gandhi was born during the British colonial period in the port city of Porbandar in 1888. As a child, he experienced how the British exported the locally grown cotton to Britain only to return it to India as British-made clothes.

He saw how this helped to impoverish the Indian population, and as an adult, he encouraged his fellow citizens to boycott imported British clothes and instead produce their own.

He went ahead by himself to spin cotton in public and to do the spinning wheel to spin a symbol of independence and he went only in a homespun Indian loincloth, (dhoti'en).

In 1930, Gandhi began a campaign against the British tax on salt, which made it illegal for Indians to produce their own salt.

He pioneered the famous Salt March on 12 March, which stretched over 400 kilometres through Gujarat to the coastal town Dandi, where he bent down, gathered a handful of salted mud up, and declared, "With this I shake the British Empire in its foundation."

17 years later, in 1947, India finally got its independence. One egoistic and dump-minded youngster assassinated the Indian prophet the following year. However, the production of salt, cotton and many other agricultural products from Gujarat were now in Indian hands.

Today, India is the world's third largest cotton producer after the U.S. and China, and most of the cotton comes from Gujarat State. The State also produces 140,000 tons of salt annually.

In the summers, 2005 and 2006 was strong monsoon rains caused severe flooding in Gujarat, which destroyed thousands of homes and killed over 1000 people. Both infrastructure and agricultural production was affected.

With the future global warming as predicted, this climate pattern is likely to be intensified. Gujarat State may get to experience more powerful and unpredictable monsoon rains and floods.

This can do serious damage not only to the infrastructure and millions of people and their homes, but also to the economically important production of salt, cotton and other agricultural products.

Great Cities in the Western State

There are also some towns such as Anand, Sasan Gir with Gir National Park and Gir Sanctuary, Anjar, Bacchau, Bhuj, Gandhidham, Rapar, Maliya and Morbi. The most populated towns are on the Vishwamitra riverbanks.

Champaner Pavagadh Archaeological Park in the area was inscribed in 2004 to the UNESCO World Heritage Site. These are beautiful places to visit in Gujarat State, India.

In addition to this page about Gujarat State in western India, the salt and cotton producer, here are some other beautiful places in the world you can visit through the alphabetical category in the Beautiful Site Map here.

Are you from any beautiful place in Gujarat State in India?

I will love to read your words about this State or any beautiful place in India. Use the form below and write about it. You can also write about any topic on this page to enrich it more. I will reward you by some useful gifts when you submit the form. Thanks.

Search inside Gujarat State in India or search for any information about cotton and salt producers.


You can also enjoy more activities here indeed if you liked this page about Gujarat State in India.

I use "Solo Build It" tools at the bar below to empower this page about Gujarat State in India and the entire 100 Beautiful Sites in the World. Thanks to those strong website building and optimizing tools.