Enjoy the Nature of the Aegean Sea!

The name of the Aegean Sea derives from the King Aegeus (Aegeas or Aigeas) of Athens in the legend of the Greek Ancient Culture. 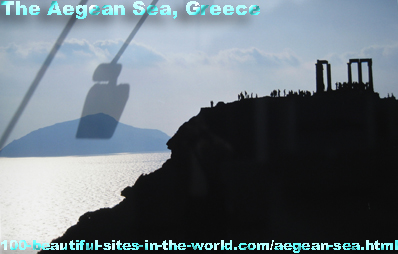 Only from the first look at this sea, between Turkey and Greece you could imagine that the sea has cracked the ground between the two countries gushing waters of the Mediterranean in vacuum in the Earth's surface to make the Aegean Sea.

Many beautiful islands lie in this sea composing the Aegean Greek Islands, such as the Greek Rhodes Island and the Greek Mykonos Island.

This issue may apply to other parts of southern Europe such as the composition of the Adriatic Sea, between Italy and Greece.

Is the Aegean Sea an Extension to the Mediterranean Sea?

Regardless to this imagination, the deep blue Aegean Sea seems in fact an extension of the Mediterranean Sea between Greece and Turkey, littered with jagged rocks.

The rocks are in many cases, extensions of the mountains on land, where there are a number of Greek and Turkey islands starting from the entrance of the sea to the rear.

The archipelago is rich with plants and naval animals and the word "archipelago" is used specifically as a definition because of the chain of islands in the Aegean.

The many islands that scatter in a crescent in the sparkling waters of the Aegean make this sea one of the beautiful sites in the world with heritage sites and many attractions, all of which elevates the tourism industry mainly in Greece and Turkey.

Turquoise blue sea and many Aegean Greek islands on the region contributes to the natural beauty of the sea and attracts tourists from different parts of the world.

The sea close to both Turkey and Greece receives many tourists continuously and they engage in remarkable tourist activities.

However, as it is strategically located between the tow countries, so they have disputed on some islands.

All the Aegean Sea islands belong to Greece except two of the main islands that belong to Turkey since the Treaty of Lausanne in 1923. See resources below.

Starting from Olympia, the Ancient Greek Culture has some aspects on some of the Aegean Sea islands like Pythagorean (Pythagorion), an ancient fortified port with Greek, referring to the main inspiring source of philosophy to Aristotle and Plato and Roman monuments and the Tunnel of Eupalinos.

Until 100 years ago total Mediterranean monk seals in herds on open beaches, where they rested and gave birth to their pups.

Since seals have left the beaches in favour of caves along the desolate, rugged coastlines, there is virtually inaccessible to humans.

Seals changing habits is probably due to the 20 century's growing population and growth in tourism and industry - an explosive development that does not fit into monk seal timid nature.

One of the few places where the Mediterranean monk seal is still able to live remains relatively undisturbed. It is in the Greek Alonissos or Alonisos sanctuary in the northern part of the Aegean.

The large area here is devoted to the protection of the seal and its habitat. In the future, however, the reserve may not be enough to shield population of monk seals.

Sea-level rise caused by global warming is expected to flood the caves and thus destroy monk seal breeding sites and their last refuge from humans.

The Greek-Turkish Conflict in the Aegean: Imagined Enemies (New Perspectives on South-East Europe)

The Aegean dispute is the main Greek-Turkish conflict and threat to peace and security in the region. The book shows that the dispute is solvable (in win-win terms) and that the crux of the problem is not the incompatibility of interests as such but the mutual fears and suspicions, which are deeply rooted in historical memories, real or imagined.

Greece, Turkey and the Aegean-Sea: A Case Study in International Law

For many years, Greece and Turkey have been involved in aggressive rivalry over large areas of the Aegean Sea as well as Cyprus.

The conflict between the two NATO allies endangered the peace and even brought them to the brink of war. Nevertheless, no agreement has been reached despite their mutual assistance in the aftermath of the earthquakes suffered by both countries in the summer of 1999.

This work provides an in-depth discussion of how the conflicts began the matter of Cyprus and international law, disputes and near-war situations over the Aegean, the dynamics of and prospects for a new Greek-Turkish partnership, and current developments in disputes and relations.

The Aegean-Sea After the Cold War: Security and Law of the Sea Issues (International Political Economy)

The reference book contains contributions of scholars from Canada, Greece, Israel, Italy, and the United States.

Section 1 consists of studies on historical and security issues, with contributions on the historical background of Greco-Turkish relations, British perspectives on these relations after World War II, the role of NATO, Greece's defence strategy, and the balance of power between Greece and Turkey.

Have you been at those beautiful islands o the Aegean Sea? Are you from the area? You can either comment on this page or write about the Aegean Sea. Use the form below to do this.

If you want to write about any island in the Aegean Sea, please use the form at Any Beautiful City here. Thanks.

Search for any information about the Aegean Sea, or search inside Greece. Use the Greek category.

You can also enjoy more activities here indeed if you liked this page about the Aegean Sea in Greece.

I use "Site Build It" tools at the bar below to empower this page about the Aegean Sea in Greece and the entire 100 Beautiful Sites in the World. Thanks to those strong website building and optimizing tools.