Sulu Sulawesi Sea Becomes Home of the Bajau in Malaysia!

Sulu Sulawesi Sea spreads in large areas in southeast Asia and makes beautiful and rich marine locations between Malaysia, Indonesia and the Philippines, where the indigenous ethnic group of the Bajau spent most of their lives on the sea until the last decades.

It became home of the Bajau who live in Malaysia, Indonesia and the Philippines and it is one of the world's first 200 sites of the diversity of marine species.

The following lines are about this sea, the Bajau people and the affects of global warming in the area.

If you have more information about this topic, please use the form at the bottom of the page to write it. You will receive some gifts for your contribution to this page. Those gifts are good for knowledge and they could benefit you. Thanks. 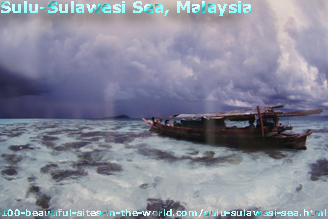 The beauty and richness of Sulu Sulawesi Sea favour the Bajau people. However, 10% of them remain to live with this favour.

For most of the history, the Bajau people have lived a nomadic seafaring life in the tropical monsoon climate in the Sulu Sulawesi Sea, where more than 450 species of coral and thousands of sea species live in an area of more than 81,000 acres.

The Sulawesi Sea is one of the world's first 200 sites of the diversity of marine species. This sea is home to five species of sea turtles such as loggerhead, leatherback, green sea turtle, olive ridley and green sea turtle.

There are also more than 400 species of algae, 650 species of reef fish, and many species of marine mammals, dolphins, massive manta rays and whale sharks.

The entire area of the Sulu Sulawesi Sea spreads to almost one million square kilometres where 35 million people live. It covers a very special geopolitical location between three countries, the Philippines, Indonesia and Malaysia.

The Malaysian portion of the Sulawesi Seas includes:

The Bajau came from the southwestern coastal areas of the Philippines, but today they spread out over the triangle between the Philippines, Indonesia and Malaysia. That indigenous ethnic group is well known in the area as nomadic seafaring people.

Those nomadic seafaring people fish, eat and sleep in their homemade Lipa-Lipa-boats equipped with roofed living residential areas made of mats and poles, where meals are prepared on portable clay hearths.

They fish with spears and hand-held lines, and they use lanterns to light up the sea on moonless nights. Special hunt for sea cucumber, as in many Asian countries deemed to be a great delicacy, certainly for the Bajau whereabouts.

So, their movements are largely determined by the sea cucumber. Bajau divers can reach depths down to 30 meters in the Sulu Sulawesi Sea searching for sea cucumber.

Although the Bajau people are declared Sunni Muslims, but many of them still perform other older spiritual ceremonies, such as casting spirit boats into the high seas to prevent hostile ghost and to ward off offending apparitions.

While some Bajau have settled on land to live as peasants and cattle breeders, around 10% of them are still dwellers. The traditional nomadic way of life is growing increasingly complicated for these last 10% of them.

Over fishing and illegal methods of fishing such as blasting and poison fishing are damaging the coral reefs and destroying the natural habitats of fish and sea cucumbers alike.

In the future, the expected increase in sea surface temperature and the increasing acidification of the sea because of climate change are likely to accelerate coral death. This could ultimately herald the end of the traditional Bajau way of life and affect the habitat of the Sulu Sulawesi Sea species.

You can comment on this page about Sulu Sulawesi Sea, or write about Malaysia, Indonesia, Philippines and the Bajau.

To do this, please use the following form and contribute to this page. It is good idea to leave your email address so you can receive any reply to your comments.

I have some gifts for you too for sharing your words about any beautiful location on the Sulu Sulawesi Sea and the affects of global warming on those locations. Thanks.

Search inside the areas of the Sulu Sulawesi Sea or any other beautiful places in Malaysia, Indonesia and the Philippines.


You can also enjoy more activities here if you liked this page about Sulu Sulawesi Sea. Please share it with your services through the buttons here, at the left column of the page and at the bottom of the page.

I use "Solo Build It" tools at the bar below to empower this page about Sulu Sulawesi Sea and the entire 100 Beautiful Sites in the World. Thanks to those strong website building and optimizing tools.