London Owes its Appearance to the Thames!

In an imaginative mythology, the River Thames had flown from the God's mouth to the Goddess' mouth. When the Roman touched the water of the river by their foot, the river sprang like a lion to curve the valley to protect the city behind it. The elixir of the river beat its way from the banks, ascended to create the thunder, and defended the city too.

However, this is not the ancient Greece, but Engla land.

In reality, London River decreases while the capital city of Britain grows. London spread to cover 1,579 square kilometres, spilled over into the river, and thus narrowed the race.

The following brief article is about the (Temms) river (نهر التيمز), as you pronounce it. If you have more information about it, you are more than welcomed to add it to this page. I will reward you for your contribution by some invaluable e-books to read for more knowledge or to use and benefit from them. 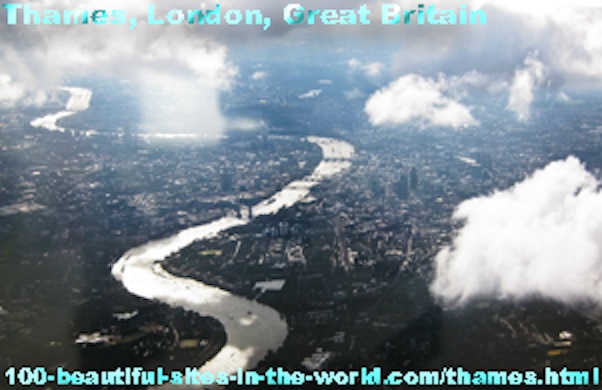 As a major river in Britain and from its source on the Cotswold Hills in Gloucestershire to the North Sea, the Thames is 346 kilometres long. It flows through other cities including Oxford, Windsor and Reading.

The river has shaped and endued the capital city of England through the years. Occupying the heart of the city, it gives it impulses to grow. There are 214 bridges crossing it besides 20 tunnels, 6 ferries and a ford. Among those bridges are the:

The British novelist and biographer, Peter Ackroyd with his interests in culture and history and who was born in 5 October 1949 in London wrote the following in his book, "London:

The Biography" in 2000, "Thames has always been a commercial river. The city owes its appearance and its character to it."

The Romans, led at the time by Emperor Claudius built about 2,000 years ago the first settlement on the northern bank of the River Thames in the year 43 AD and called it Londinium.

They chose the beautiful site at that spot because of its location on the river and its proximity to the sea. Ever since that time, the Thames has been the main artery in the city, which became the world's first metropolis and the center of commerce and finance.

Right from the early Middle Ages and up until today, the city has expanded over into the river, involved growing parts of its banks, and thus narrowed the race. However, the river is also a greatest threat to London.

High embankments built through the years along the Thames to protect London against the tide and flood. However, those embankments have not always been sufficiently effective.

London became an effective shield against extreme weather conditions after 1983, when the authorities built the storm surge barrier, the Thames Barrier.

In 2025 however, it is not certain that the river Barrier will be able to protect London from flooding, although some environmental experts have anticipated that the city is less vulnerable to any rising in sea level caused by climate change.

If climate change continues, the combination of high tides, hurricanes in the middle latitudes and a general rise in sea levels inundate the current barrier to widespread destruction as a result.

If this happens, large parts of London will be flooded, including parts of the metro system, railway stations, hospitals, thousands of homes and historic areas including both the Parliament at Westminster Palace and the Tower of London.

A flood would have an immediate impact for the 125 million people living in low-lying parts of London. About 340,000 residential and commercial properties may be affected.

Just one flood to take over the current Thames Barrier will make inroads into the British economy of an estimated £30 billion.

The Thames Researches and Studies

Something interesting is happening here, not only about the Thames, but about Britain and the world!

The Leverhulme Trust continues its mission as a foundation that started in 1925 to conduct scientific researches and use its resources to support scholarships and researchers.

It began some projects in this specific field of knowledge. Among those projects was the Ancient Human Occupation of Britain Project in 2001 to bring researchers together to investigate the record of human presence in Britain since more than 12,000 years ago.

They look at the occupation of Britain until the last Ice Age. The researches and studies included the changes in climate, landscape and biota over the last million years.

They provide an environmental understanding to both the presence and the absence of humans during that time and until the development of the new technologies.

Here is a go to understand the Ancient Human Occupation of Britain, through Volume 14 (Developments in Quaternary Science)

Those lines above are discussable and could be highlighted more through your sincere contribution. You can either comment on this article about the Thames River in London, England, or write your own.

To do so, please use the following form and contribute to this page. It is good idea to leave your email address, so you can receive notifications about commentaries on your comments. We'll NOT PUBLISH your email.

The Thames provides an intimate portrait of the waterway at the heart of English history from different points. The first is from the elephants on the bank of the prehistoric river to Caesar's expeditionary force.

The second is from King Alfred's battleships to the signing of Magna Carta. The thirds is from the river's role in both the coronation and execution of Anne Boleyn to seventeenth century frost fairs and the first performance of Handel's Water Music.

The fourth is from Turner's view of the river as arcadia through its bombardment during the Blitz.

Crossing the River: The History of London's Thames River Bridges from Richmond to the Tower

Artists, as Dickens and Claude Monet have achieved some of their great works inspired by the architecture of London's bridges over the Thames.

From the elegant Richmond Bridge to the Gothic, quintessentially British Tower Bridge, they have formed the backdrop to battles, rebellions, pageantry, and mysteries for two millennia.

Can you measure the Thames? Is it 215 miles or more?

Why was London River a defence frontier against Julius Caesar?

Why did the Normans build the Tower of London and Windsor Castle on the Thames?

You can use the following form to answer these questions too. Many thanks.

I have some gifts for you too for sharing your words about any beautiful location on the river basin in London, England and the effects of global warming on those locations. Thanks.

In addition to the THAMES, you may also be interested in the following articles at: County Meath| London Olympics| London Olympics Show| London Olympics Torch| Mount Olympus| Olympia| The Culture of Olympia has Influence Elsewhere| Travel Photography| Visit Scotland without Visa|

I wished I could. Students need entrance permission to Scotland without visa. The visa application online is complicated and not encouraging. I have …

Comments, or new articles about the THAMES River basin in London, England appear at the second section of the pages above.

You can also enjoy more activities here if you liked this page about London's River basin in England. Please share it with your services through the buttons here, at the left column of the page and at the bottom of the page.