Okavango Delta is Rich by Nature!

Okavango Delta is the daughter of Okavango River. "She" is not just any daughter, but a very beautiful one. Her body is so fertile. "She" is beautifully curved to stand green and incredibly rich by beauty.

When the sun glow touches her at sunrise, or sunset, she becomes inspirational trace for tracers, poets, writers, musicians, singers and photographers to trace and model the beauty of nature. 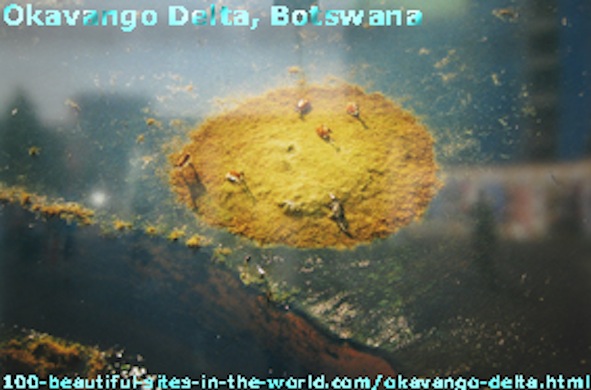 Okavango Delta and the Poetic Tragedy of the River!

The river, which is full of life feels the beauty and the pleasure of his creation and knows that despite the life he offers, he will die soon inland.

So as this tragedy seemingly endures in epic, he stretches his fingers to touch this beauty. When the pleasure electrifies the waters, the river climaxes in floods.

When he relaxes after that, he cuts his body down into pieces and makes small inland lakes. The lakes surrounded by the plants and where there are some beautiful waterlilies grow on the water along with other green leaves appear as tracery on the beautiful body of Okavango from the Safari balloons.

These lines are almost consequent with the literature this river offers for its people and precisely integrates well with one of the dialect poetry those people sing. The semi-epic poetry says something I could interpret here as the following:

"I am the river

Young and full of health,

I am not living for ever,

My surface gives you wealth,

If you still wonder however,

Below that is death."

But, the surface, which gives life and wealth and the depth together become dangerous sometimes, when the river gets insane by the beautiful of nature and runs madly with more waters caused by the rains on the heights of Angola and north Botswana.

Well, despite this prose the delta is just a delta. But, it is not just like any delta in the world. The Okavango River makes the beautiful Okavango Delta.

It makes both life blooming and death dwelling in its floods in Botswana and the neighboring countries it runs through to end thousand of miles in the heart of Botswana's Kalahari Desert, which spans also into Namibia and South Africa.

During one of the remarkable floods in May 5, 2010, the Okavango River flooded twenty villages in Botswana, damaged the homes and habitats of the dwellers and forced them to evacuate their homes and flee for safety.

As the river continues to rise every year, the mentioned floods affected also Namibia and they forced thousands of people living in Windhoek, the capital city of the Republic of Namibia to flee their homes.

The rains in summer in Benguela Highlands in east central Angola run into the Okavango River and the river runs to cross the Caprivi Strip of Namibia, then into Botswana where it spreads out through the vast Okavango Delta.

As one of the longest river systems in southern Africa, it makes the largest inland delta and the largest wetland in the landlocked country, Botswana.

The Okavango Delta has expanded three times between june and August after the last remarkable floods, when the river broke into pieces in some places.

The water level rose in May, 2010 was too early for the estimated period, which makes alerts that the results of the climate change could vary than what the environmental experts has expected. Such unexpected results may end changing the unique ecosystem.

The crises of nature are objects for culture. The floods of the Okavango River inspired the Bayei people, one of several tribes dwelling in the Delta of Okavango, to use poetry to teach their children about the delta.

The inspired poem in their dialect goes something like this, "I am the river. My surface gives you life. Below is death". However, the death below refers also to the crocodiles in the region as they are a threat to both, the people and the animals of the delta.

The Okavango River Delta in Botswana has the richest and beautiful nature in Africa. The nature makes it one of the most amazing places in Africa that stands unique with its rich fauna and flora.

There are many beautiful sites in wonderful oasis in Botswana where beautiful and dangerous species live. You can enjoy good times in these places whether you get into the water on a mokoro canoe, on the land on a jeep, or on the air on a balloon.

The Delta of Okavango forms a labyrinth of lakes, lagoons and hidden channels covering an area of over 15,000 square kilometres, making it the largest inland delta in the world.

Moreover, Okavango Delta is trapped by the parched Kalahari Desert and has no permanent outlet to the sea, and it is a magnet for wildlife, which is dependent on the delta and its regular floods.

Each summer starting from December in the north, and from May in the south, the waters of Okavango Delta flooded. Some Islands disappear completely because of the floods.

11 cubic kilometres of water reaches the Delta of Okavango every year. The water is exceptionally clean because there are no crops grown in the way and no industry along the adjacent rivers.

The Okavango River has no basin to the sea. It ends into the sands of Kalahari Desert, irrigating 15,000 square kilometres of it. The water runs south to reach Lake Ngami. 90 million litres of water flow into the delta yearly. 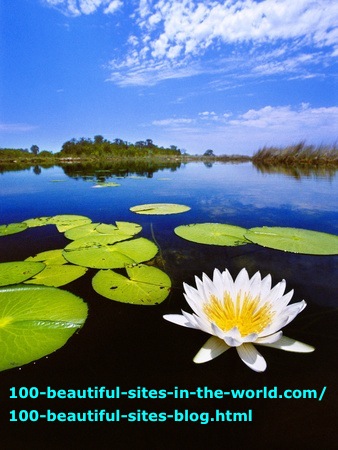 Okavango Delta and the Richness of Wildelife and Ethnicity!

Five ethnic groups, each with its own identity and language, live around the delta. These are Hambukushu, Dceriku, Wayeyi, Bugakhwe, and Ilanikhwe. The first three are Bantus and the late two are Bushmen.

The Hambukushu people of Botswana known as rainmakers of the Okavango have long experiences with the rains. They came from southern Zambia to live on the Okavango Delta.

The rainmakers work as chiefs and ruled their tribe in Zambia, Botswana and Namibia before the formation of the states in southern Africa.

They make the customs and tradition of the area one of the nostalgias in the world. Like many other places in the African continent, they have their rituals as magic and it is believed that rituals attract rain or stop it.

The nature of the Okavango Delta sustains the rich fauna and flora in Botswana, as there is a diversity of species including 444 bird species, 71 fish species, 64 reptile species, other 164 mammal species and more than 1000 plant species.

According to the UNESCO, there are 1061 plant species in the Okavango Delta, with 20 species selected in the Red List Status based on the International Union for Conservation of Nature (IUCN) red list criteria.

The IUCN estimates 1300 plant species and more than 400 species of bird, though. That makes the Okavango Delta second to the Brazilian Pantanal Wetland. See Amazon Rainforest. 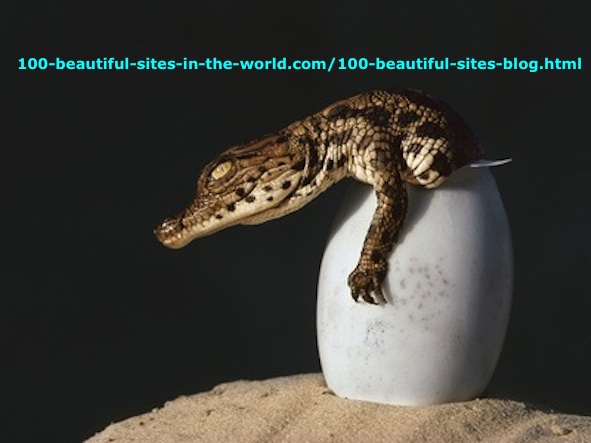 This is one of the world's richest areas in terms of wildlife and these ethnic groups share the land with countless species such as: elephant, buffalo, hippopotamus, wildebeest, giraffe, lion, wild dog, antelope, zebra, blue wildebeest, cheetah, greater kudu, sable antelope, baboon and many more - including the Nile crocodile.

Among them are eight globally endangered species. In addition, there are also many kinds of birds including African fish eagle, the crested crane, the lilac-breasted roller, ostrich, sacred ibis, tiger fish, tilapia, and catfish.

Through some precipitations, it is expected that rainfall will decrease due to climate changes and the temperature in the region predicted to rise, so delta huge peat bogs might dry out.

This implies a risk that the peat will ignite and release huge amounts of greenhouse gases. The tribes that live around the delta could be forced to find new homes elsewhere and resettle there.

To survive they will have to adjust their lifestyle, which would have a negative impact on the unique culture that exists among the tribes in the Okavango Delta.

In addition to Okavango Delta in Botswana, you may also be interested in the following African places and other African topics:

There is always more information about the Okavango Delta and other 100 beautiful places in Africa and the other parts in the world at the second section of the pages just below the comments form. So, it will always be better to see that section for more information.

Do you have more information about the Delta of Okavango or any beautiful place in Botswana? Use the following form and write it. You can write about your city of birth, or about your city of residence, upload pictures from it and take some gifts with you from this website. Thank you.

The Okavango River is not the only river in the Okavango Delta. There are some other rivers and affluents from this river named by Botswana's native names. …

Comments and new articles about Okavango Delta and other places in Botswana appear at the second section of the page above.

You can watch movies and documenatries on Botswana, Okavango Delta on documentary film at TVCinemaApp.com. 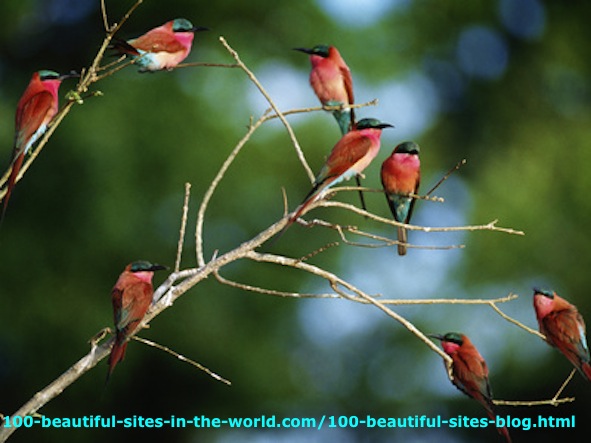