What Did You Know about Olympia and Olympus?

Olympia in Greece was a beautiful meeting place for Gods, Goddesses and the ancient Greek Olympiad games.

However, those Olympiads in the Ancient Greek Culture and sports were not similar to the recent Olympiads, although they have inspired all the present performed olympics.

This historical place in Greece has reflection all around the world and of course, throughout the Aegean Sea and the Aegean Greek Islands, which reflect all together the Ancient Greek Culture.

Here is more information about one of the 100 beautiful sites in the world. However, if you have been at the site, or if you know more about the area, you can use the form on this page to write about it from different angle. Thanks.

Scattered ruins of impressive temples characterize the Greek landscape and demonstrate the country's great past. They are evidences of the pre-eminence of Ancient Greece.

The valley of Olympia lies on the Pelopónnisos peninsula in southern Greece. It is a shrine consisting of religious buildings and sports facilities. This is where the first ancient Olympic Games were held.

The oldest verifiable evidence of construction on the site is the Temple of Hera. That temple was sacred to Zeus' wife and honouring her. It is dated to 600 BC in some sources.

However, the golden age of Olympia was during the 5th and 4th centuries BC, when the impressive Temple of Zeus was built.

It was the biggest temple in the country. Nowadays, only few columns remain from the temple of Zeus. The Greek sculptor Phidias made Zeus statue in 432 BC.

The base and pillars of both temples have now been restored along with Olympia's ancient baths and stadiums, and they stand today in the shade of the poplars, olive and pine trees.

In addition to Olympia, it is know that twelve gods and goddesses dominated the Greek mythology from the top of the Mount Olympus. Every god and goddess in the mythology has power over something.

Those are the gods in the mythology::

Apollo (god of the sun, light and truth),
Ares (god of war),
Dionysus or Bacchus (Greek god of wine and ecstasy),
Hephaestus (god of fire and the son of Hera and Zeus, although it is said he has no father and Hera created it),
Poseidon (god of the sea),
Zeus.

Moreover, those are the goddesses:

Aphrodite (goddess of beauty and romance),
Artemis (goddess of the moon, hunting and healing and the daughter of Zeus and Leto and twin sister to Apollo),
Athena (goddess of wisdom),
Demeter (goddess of agriculture, grain and fertility),
Hera (goddess of marriage, wife of Zeus and mother of Ares),
Hestia (goddess of Hearth and the last born, because her father swallowed his children although stories say she is Zeus sister).

Read more about the Greek Rhodes Island here and continue at the Greek Mykonos Island.

It is believed that the first Olympic Games were held in 776 BC. The games were dedicated to the gods, and athletes were immortalised for their abilities to move the crowd with their great sportive deeds.

The Games continued for nearly 12 centuries until the Christian emperor Theodosius I decreed that all such "pagan cults" or "heathen culture" to be banned in 393 AD.

The Olympic Torch is still lit at the Temple of Hera before being relayed to the most host city for the modern version of the Olympic Games.

The Olympic flame commemorates the time Prometheus has stolen the fire from Zeus, the Greek god. Read the full article about Prometheus at wikipedia here.

Lighting the torch became a tradition whenever athlete activities run across the world since 1936 when the games began in Berlin.

The ceremony always began when runners enter the stadium and the first one of them holds the torch high or runs with a torch to light other torch.

In recent years, Greece has experienced extremely hot and dry summers, which has led to an increasing number of wildfires.

The heat caused devastating and catastrophic fires that went out over woods and farmlands, destroying villages and killing 64 people.

The area surrounding Olympia was also damaged in 2007. However, for the time being the archaeological site is still intact.

With the expected increase in temperatures and decline of rainfall, the global climate change raises the precipitation of increases on the frequency and ferocity of wildfires. 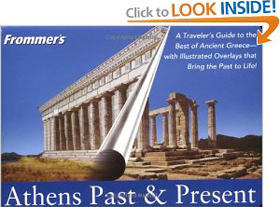 The book above brings ancient Athens to life and it is perfect for anyone traveling to Greece.

The 2004 Olympic Games drew hundreds of thousands of visitors to Athens between August 13-29 and most of these visitors took a break from the games to visit Athens' most famous tourist attraction, the Acropolis.

Although the book was published during that occasion as a unique guidebook but it is useful to give full insights into these beautiful places in Greece.

The book comprises contemporary full-color photos and shows what the Parthenon, the Erechtheion, the Temple of Athena Nike, the Propylaea, and all the other celebrated ruins on the Acropolis and elsewhere in Athens look like today.

With the flip of a meticulously painted acetate overlay, people can see exactly what each site looked like back in the 5th century B.C.!

In addition, for visitors who are traveling outside of Athens, the book includes the best sites in Olympia, Cape Sounion, and Aegean.

The book is small enough to fit comfortably in a pocket or purse, spiral-bound for ease of use, and complete with concise descriptions of each archaeological site.

Many readers considered it as the perfect secondary guidebook for any traveller who wants to grasp the glory that was Greece.

You can read some more useful information about Olympia, the Olympus and other beautiful sites in Greece at the Ancient Greek Culture page here.

Three values in three questions... so please bring your answers to them in here using the form below. You can write anything you knew about Olympia, Olympus and other beautiful places in Greece down here on the form.

The Culture of Olympia has Influence Elsewhere! Not rated yet
There was a great Greek community survived in Sudan for a long time. Greeks had many groceries, bars and other businesses in a flourished society that …

You can share this page about Olympia in Greece with your services through the following buttons.

This is a way to enjoy more activities here indeed, if you liked this page.

If you found Olympia useful, please like and tweet it using the small buttons at the top of the right column. Thanks.

"Solo Build It" tools at the bottom of the page empower Olympia in Greece and the entire 100 Beautiful Sites in the World. Thanks to the experts who built those strong website building and optimizing tools.