Here is the Beautiful Imbros Island! Here is Gokceada!

Turkey has only two main islands on the Aegean Sea, known as Gokceada and Bozcaada in addition to over 212 smaller islets off the Turkey's western coast.

This page about the Beautiful Imbros Island on the Aegean Sea and some other beautiful Turkish places is for you to publish what you knew about those beautiful locations. Use the form on this page to write and upload beautiful pictures too. Thanks. 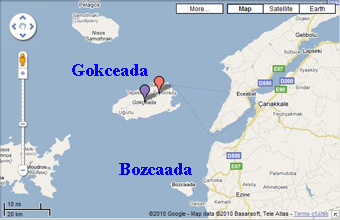 Gokceada or Imbros covers 300 square kilometres at the entrance of the Dardanelles and of Saros Bay, in the northeastern part of the Aegean Sea.

In Imbros, there are some towns including Yenibademli at the tip of the island in the north, Kalekoy at the northwestern coast, Bademli, Gokceada, Zeytinlikoy, Tepekoy, Eselek at the east, Derekoy, Ugurlu at the south. If you knew about other towns, please add them through the form. Thanks.

Only 8,894 people, the majority of them are Turk inhabit this island and 7,254 of them live in Gokceada town. The number of Greeks dropped since the 1960s and now there are only 250 Greeks inhabitants most of them are old and they live in the town of Imbro.

The Beautiful Imbros Island lies also south of the Thracian Chersonese peninsula near Samothrace, from which you can see the Greek Samothraki Island, as people say. The two underlined names here are used for the same place.

Historically, people called the Beautiful Imbros Island by different names such as Imbros (Imvros), and Imroz Adasi. They call it now Gokceada (Gökçeada). The nature is fine in this wooded landscape known for its honey and sheep nowadays.

The coast is rich. However, the Council of Europe Parliamentary Assembly has mentioned that the harbour of the Beautiful Imbros Island (Gokceada) has begun to tumble down and called for necessary measures to restore the landscape. Review the call to stop the excavation work at Imbros Beautiful Gokceada Island.

This does not engage all the people as the inhabitants in the Beautiful Imbros Island work in the fishing and tourism sectors.

However, in the past, and in addition to its vineyards and wine production, people consider Imbros (Gokceada) an archaeological site with the discovery of ancient coins and pottery, which remark the two ancient industries of coinage and pottery.

In the near past, the Allies used the islands during the war for strategic purposes across the northern passages to Russia. In January 20, 1918, the Turkish soldiers engaged in a battle against the British Royal Navy off the island of Imbros.

During the national birth of the Turkish Republic under the government of Mustafa Kamal Ataturk, the Treaty of Lausanne 1923 was signed to replace the Treaty of Sevres in 1920 to make the island part of Turkey with a kind of autonomous administrative status.

The second Turkish island is here at Beautiful Tenedos Island.

The Greek-Turkish Relationship and NATO

The Eastern Mediterranean, have transformed from a region of secondary importance during the Cold War to one of greater importance for the western interests in the post-Cold War era, in a state of flux. Despite sporadic periods of rapprochement, tensions between Greece and Turkey still exist.

Therefore, one must question the grounds behind the lack of normal relations that exist between these two NATO members and its effects on the NATO organisation as a whole.

Sailing Around the World the Wrong Way: Volume V: Turkey to the Black Sea

Here's a true story of one man's attempt to live out his lifelong dream of sailing around the world to strange foreign ports in his own sailboat.

Volume III covered the third part of his journey from Amsterdam around the British Isles, through the French canals to the Mediterranean, and down the coast of Italy.

I have not read this book, but perhaps the beautiful Imbros Island is included since he travelled to Turkey and the islands on the Aegean Sea. The name of Imbros beautiful Island is also noted in this description.

The Gallipoli peninsula (Turkish) is located in Turkish Thrace, the European part of Turkey, with the Aegean Sea to the west and the Dardanelles straits to the east. Gallipoli derives its name from the Greek (Kallipolis), meaning "Beautiful City".

After the devastating 1354 earthquake, the Greek city of Gallipoli was almost abandoned, but swiftly reoccupied by Turks from Anatolia, the Asiatic side of the straits, making Gallipoli the first Ottoman position in Europe, and the staging area for their expansion across the Balkans.

Have You Been at the Beautiful Imbros Island? Write about It!


Do you have a great story about any beautiful site in the world? Share it!

If you liked this page about the Beautiful Imbros Island, please forward Forward 100 Beautiful Cities to your friends and share it with your social bookmarks through the small buttons on this page.

Solo Build It on the image bar at the bottom of the Beautiful Imbros Island empowers this page. It empowers in fact the entire 100 Beautiful Sites in the World.