Paris is the Capital of Beauty and Arts!

Most of today's Paris was designed as Napoleon III in the middle of the 19th century sparked a modernization of the city, which transformed the old, narrow streets and houses with open, wide boulevards, surrounded by neoclassical stone buildings.

The following few lines is about the capital city of France as one of the beautiful places in the world. If you found it useful, please share it. If you know more information about France, or if you had seen the beautiful site of the French capital there, use the form at the bottom of the page to share it with us. Readers to this page will thank you for your contribution. Thank you. 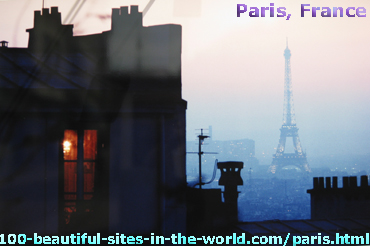 Napoleon III, 20 April 1808 – 9 January 1873, had a dream to make a dreamy beautiful city, enticed by his own imagination. Thus the capital of beauty, love and fun has born. The favour of Charles Louis Napoleon Bonaparte, the last monarch and the first President of the French Republic, is developed to make Paris one of the first beautiful sites in the world.

The Parisii Celtic tribe established a fishing residence near the Seine River in 250 BC. The area, which called in the old days Lutetia, was built in 52 BC by the Gallo-Romans. It is named by the recent name during the reign of Julian the Apostate in 360-363.

There are many assumptions about the foundation of capital city of France though. The city became big decades after decades until it reaches the present land of 86.9 square kilometres. However, this article is not about the history of the city.

Paris is influenced by the North Atlantic Current circulation and thus rarely experiences extremely high or low temperatures. Nearly 12 million people live in the city and its suburbs, which makes Paris one of the most heavily populated metropolitan areas in Europe.

In 2003, a heat wave struck Europe. It hit France particularly hard, especially the northern regions, where people are not accustomed to high temperatures. Summer in capital city of France has an average maximum temperature of 25º C, but in the summer of 2003, the maximum temperature rise up to over 40º C.

14,802 extra deaths were recorded in August 2003 in France. Ile-de-France region, where Paris is located, stood alone for one third of that number.

Many of the dead were elderly people who were alone in their apartments, while many French families, physicians and family doctors were on vacation. There were so many cases of death that the unclaimed corpses were forced to be stored in a refrigerated warehouse outside capital city of France.

Across the whole of Europe, about 35,000 people died because of the heat wave in 2003. Temperature records were broken in Britain, Germany and Spain, while in Portugal forest fires destroyed 5% of the countryside and 10% of the forests.

In the second half of the 21st century, it is predicted that summer temperatures in Europe will be similar to those occurred during the heat wave in 2003. By then, heat waves will be even more extreme, which poses serious risks for people and authorities to be accountable to and take great efforts to address the coming threats.

Have you been in Paris or any beautiful place in France? Do you know more information about the capital city of France? Use the form below and let's know more.

Beautiful Places, Paris! Not rated yet
Beautiful Places in Paris! I always have a dream to live in this beautiful city of love and beauty! It could be that was only my luck to miss …

If you found this page about the capital city of France useful, please share it with your services through the following buttons. If you do not have a service there, register for one and enjoy this kind of technology and social networking experiences. Thank you.

I use "Solo Build It" at the bottom bar to empower this page about Paris, the capital city of France and the entire site, by strong website building and optimizing tools. "Solo Build It" is really great.