Why Lake Chad is about to Disappear?

Lake Chad is located in the savannah and grasslands of the Sahel region just south of the Sahara desert. The location is one of the beautiful sites in the world. Surrounded by four countries, Lake Tchad is the important existence source of the African population in four countries.

However, many political, human and natural factors affect the Lake of Chad and endanger the natural habitats and one of the most important water resources in this African region. 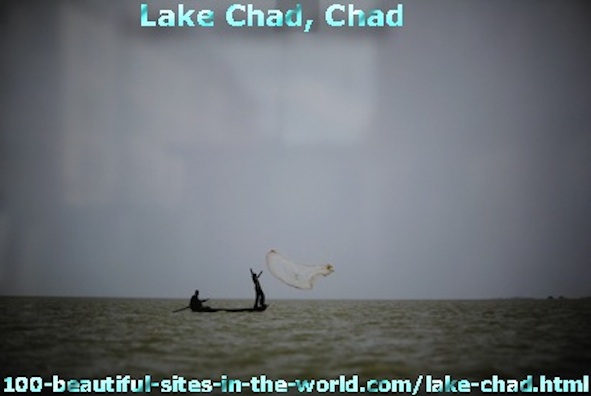 The future of good environmental development to the area of the lake is uncertain, in spite of the fact that every wise person knows where there is waters that touch the borders of some countries, the responsible authorities should cooperate well to protect this source.

The following short article is about Lake Chad. If you know more information about the lake, please use the form at the bottom of the page to share it. Thank you.

Whenever there is water, there are beautiful sights, harmony between the people who live in the area of the water and mutual human activities to maintain the water source, as every wise person knows.

But, water resources make problems sometimes. See the political development in Chad here, as this is a political issue and it is not of the beautiful sites in the world's interests.

The lake is surrounded by four countries Chad, Cameroon, Nigeria and Niger. It is the most important source of water for drinking, crops and livestock, as well as extensive subsistence fishing, for more than 20 million people.

Lake Chad has been an inland sea some 13,000 years ago, according to some sources. However, the Lake of Chad is now in danger because of the encouragement of the Sahara, the human misuse of the lake and other political and environmental factors.

At one point, Lake Chad covered an impressive area of 400,000 square kilometres. Because the lake is so shallow, its size has always fluctuated greatly. Therefore, over the last four decades, the lake has shrunk by an unprecedented pace.

Irrigation and damming of the rivers flowing into Lake Chad drain the lake. Besides, overgrazing on the savannah destroys vegetation. All these factors will likely make the climate even drier.

For example, the Lake Chad region of Nigeria has been an extremely rich environment. But, now most of it is a clay plain and treeless sand in the dry season.

However, in the wet season turns into marsh or shallow lakes. Despite that the hostile climate and landscape have sustained the communities that occupied the area since more than three hundred years.

Before that, the discovered items in the archaeological data, ethnography, drawings on some objects and oral tales of traditions and customs on the area show that people have lived beside the lake of Chad since more than million years.

The water, as everybody knows, is the most strategic resource on the planet and it is the most important source of living for the states and the people, all together.

But, as Lake Chad drains, the water began to be a political issue and led to disagreements about jurisdiction between the neighbouring states. Who has the rights to water has always been the problem.

The scarcity of water becomes a fearful legendary ghost and the other resources that depend on Lake Chad are also endangered by this scarcity. In addition, the quantity and quality of these resources are declined significantly to lead to more conflicts on waters.

For example, when the hydro-conflict (boundary dispute) rose between the Niger and Cameron in 2002, The International Court ofJustice (ICJ) tried to solve it by getting the Niger to cede 33 villages in the Lake of Chad region to Cameron.

Economists see the problem more clearly that the shortage of water in the lake and its basin threatens regional economic development, the stability of the people around the lake and raise water conflicts between the states in the region.

Moreover, the violent clashes between the farmers, who are constantly diverting the water and fishermen who are worried that the lake shrinks, are putting more challenges and difficulties to maintain this source and keep it safe.

Lake Chad was once one of the world's largest lakes, but now, according these factors, it is on track to disappear.

According to some predictions, the climate change in the future, in the form of higher temperatures and increasing evaporation, will accelerate the shrinkage and the transformation of grasslands and wetlands into dusty deserts.

Some environmental bodies expect that the poverty and the conflict that is due to ensue shortly would further exacerbate the situation. Water shortage will most likely increase poverty and push for the already existing conflicts.

The area of Lake Chad is one of the most neglected natural resources in the region and it is in an area that governments turn to be defiant to work together for the benefits of their own people.

The lake shrinks, while the number of the population increases. The climate change and desertification add more challenges for the government in the area to work together to solve these problems. But, could they see the real dangers?

It may take long time for the concerned environmental activists in the area of Lake Chad to reorganize, conduct extensive environmental researches and take care of influencing the authorities to work sincerely for the benefits of the people.

Shadows Across the Sahara: Travels with Camels from Lake Chad to Tripoli:

Riding Pasha, his beloved white camel, John Hare set out from the shrinking shores of Lake Chad with 25 camels, 4 Tuaregs, a Chinese professor, a white Kenyan rancher and a young Englishman.

The book at the right columns highlights his objective to reach Tripoli, following an ancient camel route, notorious in the days of slavery as a road of extreme hardship and death and last crossed in its entirety by Hanns Vischer in 1906.

Today the ancient slaving route is strewn, not as formerly, with the bones of deal slaves, but with over one thousand carcasses of dead camels. The expedition took three and a half months to cover 1462 miles.

They encountered descendants of people who had met and entertained Hanns Vischer and introduced the Tuaregs to the powers of acupuncture and the ancient art of Tai Chi.

However, the true heroes of this journey were John Hare's camels - resolute and uncomplaining in both hot and freezing conditions and sometimes in the face of icy winds. Two of the camels died of exhaustion, but the rest eventually reached journey's end.

Freshwater Snails Of Africa And Their Medical Importance:

The first half of the book at the right column is primarily a systematic survey of the snails, beginning with glossaries, keys for identification to genera and a checklist of species.

This is followed by a synopsis of species, with brief notes on ecology, distribution and parasites. Relationships are then described between snails and schistosomes and with other parasites.

The book goes on to consider the factors affecting snail populations and possible methods for population control.

Africa's water resources constantly threatened by an increasing population and the resultant rise in water demand, together with the stresses of water use for various activities, desertification, climate change, and other interventions in the water cycle by man.

It is vital that the water resources in arid and semi-arid regions are developed and managed in a sustainable and integrated manner.

The book at the right column explores these key factors and examines them featured by leading experts, concentrating in particular upon the question of groundwater recharge and dividing discussion into many sections.

Comments on Lake Chad appear at the second section of the page above this paragraph and below the comments form.