Peasants and pastoralists living in Almaty and the surrounding areas on the foot of the Tian Shan Mountain's range in Kazakhstan have always been in good mode farming and nurturing their livestock.

They depend on melt water from Central Asian glaciers since the last 3,000 years. This water source is now under threat because of the global climate change.

The following article is only about the area known as ancestral home of the apples. If you have more information about any city in Kasakhstan, please use the form at the bottom of the page to write it. Thanks. 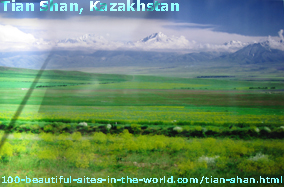 The beautiful plain at the foot of those mountains is very fertile and agricultural and pastoral activities are the main sources of income to many inhabitants.

However, in spite of the gross grain harvest that made up to 15.6 million tons and the grain export that reached 6 million tons last year, the agricultural sector in Kazakhstan is still a small.

Stretching 2,800 kilometres from the east to the west, the Chinese called Tian Shan and Celestial Mountains in other words, are important part of the Himalayan orogenic belt.

They lie north and west of Taklamakan desert. In the north of Pakistan, the range of these mountains joins the range of Hindu Kush Mountains.

From the 10th century, the city of the apples, Almaty was a central station in the northern branch of the ancient trade route, the Silk Road, which is a network of trade routes connecting all directions in Asia.

The name Almaty derives from the Kazakh word for "apple", and with the area's great diversity of wild apples, one assumes that it is the ancestral home of the modern cultivated apple.

Almaty region is also the economic powerhouse of Kazakhstan and home to 20% of its industrial production and 30% of its agricultural production.

The whole area's water supply comes from glaciers in the northern part of the Tian Shan Mountain's range, which run more than 2,000 kilometres.

Since the entire Tian Shan Mountain range divided between Kazakhstan and Kyrgyzstan and continues into China, millions of people in all three countries are dependent on the glacier melt-off for fresh drinking water, irrigating fields and for industrial production.

Over the past 50 years, the glaciers have lost about 36% of their mass due to a small but significant increase in annual temperature. With the expected increase in temperatures due to the continued global warming, this grim trend is expected to accelerate.

In the long term, this may lead to a serious decline in the volume of melt water from glaciers.

At the same time, water demands in this rapidly developing area is growing fast. Therefore, any reduction in the available supply, as predicted, would not just jeopardise Kazakhstan's agricultural and industrial development.

Since many of the dwindling rivers and glaciers cross state borders, the fight between the states on the shrinking water resources is expected to be intensified and ultimately threaten the political stability of the entire Central Asian region.

You can comment on this page about Tian Shan and Home of the Apple, Almaty in Kazakhstan or write about any other beautiful sites located along Tian Shan ranges in Kasakhstan.

To do this, please use the following form and contribute to this page. Thanks.

You can also enjoy more activities here if you liked this page about Tian Shan and Home of the Apple, Almaty in Kazakhstan. Please share it with your services through the buttons here, at the left column of the page and at the bottom of the page.

I use "Solo Build It" tools at the bar below to empower this page about Tian Shan and Home of the Apple, Almaty in Kazakhstan and the entire 100 Beautiful Sites in the World. Thanks to those strong website building and optimizing tools.