Naukluft Park in the Land of Open Spaces!

The Naukluft Park in Namibia is one of the largest parks in the world, as it stretches to more than 50.000 square kilometers. Could you believe that this area was one of the moist and fertile places in Namibia some years ago?

Although the area is dry, but, it is beautiful and the different scenes of the sand dunes are breathtaking, as the nature seems to be doing an abstract art on the earth here and the environment seems to open into the sky. So, beauty is just abstract here.

This page covers this specific topic. If you had been at the area, or if you have more information about it, you are welcome to drop by the form on this page to write your information. Thank you. 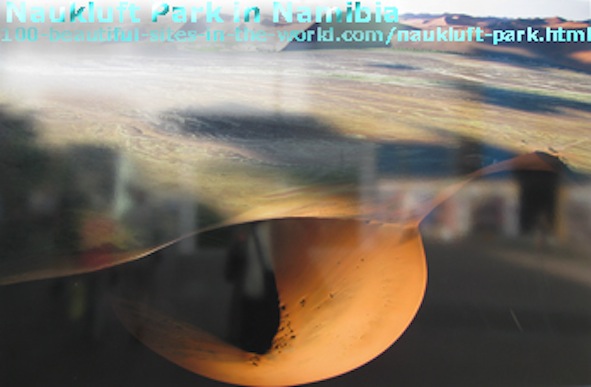 Therefore, Namibia is called the land of open spaces. The park is the fourth largest nature reserve in the planet and thus it has one of the UNSICO's World Heritage Sites at the Park of Naukluft. You'll be amazed at this heritage site.

It is located at the northern region of Namibia between the valleys of the Kuiseb and Swakop where the sand and scree cover almost 50,000 square kilometers. Strange stones and rocks are in the valleys and the earth seems as it is longing to open into the sky.

Well, the valleys of the Kuiseb and Swakop are called together the moon valley, for this reason. If you tried to stand upside down here, then you'll see that you stand on the sky and the earth is above your head!

Traveling in this area of the Namib Desert, you will see different colors in the Namibian landscape and the red dunes of Sossusveil stretch to cover large area and rise up to 3,00 metros.

Dead trees of different kinds, among them the Kokerboom or the Quiver tree appear as aloe tree in the area and most of the waterholes are dried. They shape some places with a grey, or dark colors. The acacia and varieties, other petrified trees, rare green trees and bush scatter at many places.

The star trails seem incredible. The glow of the sunset gives it a mystic presence. You could see three out of four species of Oryx Antelope, as those three species are well known native to arid areas in Africa, such as Naukluft Park and the fourth is native to the Arabian Peninsula. See Rub al Khali.

Some dunes have names, such as the Elim Dune near Sesriem. From Sesriem Campsite, which situated inside the park you could see the Naukluft Mountains at the western borders of the highlands in Namibia.

Hiking could be a pleasure in those mountains in the areas of Maltahohe (Maltahöhe) Village near the Swartrand escarpment in southern central Namibia and Sesriem town, which is the base to get water at some tens kilometers from Sossusviei and Solitaire, which is a small settlement with a waterhole in Khomas Region in central Namibia.

The average heights of the mountains is about 2000 meters, which causes more precipitation compared to other places in Namibia.

What's most amazing here is the shape of Sesriem Canyon, which is considered a geological phenomena, as it was cut and curved by the Tsauchab River about 2 million years, when the area was moist and fertile.

Great Escarpment, which stretches from the desert to the plateau, rises to over 2,000 meters (6,562 feet) and crosses to Angola, Lesotho, Mozambique, South Africa, Swaziland and Zimbabwe.

You could just the feeling that the arid landscape of the Namib Naukluft Park in the heart of Namibia seems to be endless. That is what makes it the fourth largest nature reserve in the world.

Vast fields of scree cover the majority of this fifty thousand square kilometres conservation area in the northern region, between the river valleys of the Swakop and Kuiseb. The colors of the surrounding landscape, further into the Namib Desert, become more intense.

The Naukluft Park covers most of the Namibian desert in southwest Africa and the Naukluft Mountains where rare plants and animals in the world live. It is the place of the ecological preservation in Namibia.

The remote world of stone and rock seems strange and unreal, so one of the valleys in this region is given the name of the Moon Valley.

Here in this landscape, the majestic and blazing red dunes of Sossusvlei make both the earth and the sky shine brightest, giving the landscape a breath taking view.

Shaped by the west wind from the Atlantic, dunes reach heights of 300 metres. The highest dunes are in Sossusvlei. One of the beautiful sites is Sandwich Harbour, a port on the Atlantic coast of Namibia south of Walvis Bay.

The dunes move at a speed of around 20 meters a year. Further inland they merge with landscape of bush and Savannah areas covered with grass, scattered trees and a unique wealth of rare plants and animal species in the region.

Ancient nomadic tribes have lived and roamed here for centuries, searching the area for pastures to feed their cattle.

This wide desert in Namibia is now moving on forward because of the new climate changes in the world. Straddling the Atlantic coast of southwest Africa, Namibia is home to the biggest migrating dunes in the world.

At night, the fiery sky seems to emulate the warm red colours of the mighty sand dunes. Amid the beautiful scenery, the magnificent world of the Namib Naukluft Park gradually merges with the intense glow of sunset on the Open Spaces Landscapes!

Nowadays, the area is extremely hot and arid, most of the waterholes have dried, and the trees struggle hopelessly for survival.

The Kokerboom or Quiver Tree in this arid area seems a growing variety of the aloe plant. The Kokerboom, acacias and various low-growing varieties of bush make up the characteristic vegetation of the region.

The name of the plant came from the Bushmen who made quivers for their arrows from its large branches.

People believe that the Namibian Desert is the oldest desert in the world. It is because of this desert people call Namibia the "Land of open spaces".

However, in spite the arid area Namibia is a diverse landscape with a wealth of animals and birds. The rare black rhino or desert-dwelling elephants live in this area. All this makes Namibia a good safari and adventure destination.

The wilderness of Namibia from the desolation of the Skeleton Coast to the picturesque capital of Windhoek makes it the favourite tourism destiny to many people worldwide. The attracted places in the area are Sossusvlei, Sandwich Harbour and Naukluft hiking.

West wind brings moisture from the sea in the form of fog and rain, which is vital for both the sparse vegetation and wildlife. It is indeed crucial for all life in the bush areas and in the Savannah behind it.

Climate change is expected to increase the strength of the Atlantic winds and induce droughts that are more frequent in the Namibian Desert.

In turn, the drought and the wind will result in a drastic increase in the number of dunes and the speed at which they move eastward across the landscape.

The dunes move at a faster rate. So, they threat the vegetation, wildlife and the nomads' traditional way of living in Namibia.

A research conducted recently shows that a temperature increase of 2.1 degrees C can result in 41-51% of Namibia's unique flora and fauna become extinct. The research indicates that temperature could rise to 3.5 grades C within the next 80 yeas.

In addition to Naukluft Park in Namibia, you may also be interested in the following African places and other topics:

Had you been there in Naukluft Park before?

Do you think that Naukluft Park is the wonder of Namibia?

Did you know any more information about Naukluft Park?

Do you have some pictures from beautiful places in Naukluft Park?

Use the following form to share comments, articles and pictures from Naukluft Park. Thank you very much.

You can use the same form to write about any other beautiful place in Namibia.

In addition, you can add this page about Naukluft Park to your social media services, as a good source through the buttons on at the top or at the bottom. Please, tweet, like, follow, or ping the pictures. Thanks.

"Site Build It" on the link at the bottom of the main column here and at the buttom of the right column empowers this page about Naukluft Park in Namibia. It empowers the entire 100 Beautiful Sites in the World. I love SBI, because it makes building my hobbies online snaps!

Comments on Naukluft Park appear at the second section of the pages below the comments form and above this paragraph.