Gondar is One of the Beautiful Heights in Ethiopia!

Gondar, when compared with the other 100 beautiful places in Ethiopia, is a beautiful lovely town in the Ethiopian heights people of Ethiopia love so much. It is a place for beauty and love and has some historical and natural locations to attract people. 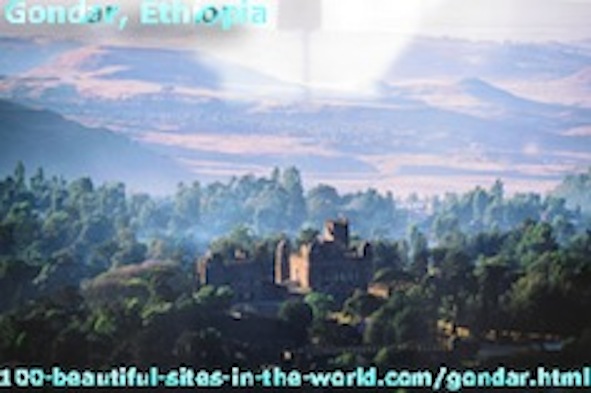 Well, starting with history, the old imperial palace and castle in Gondar in Ethiopia's northern highlands dates back to the year 1636 when Emperor Fusillades made the city Ethiopia's capital.

But, there is always misconception when people tend to ignore the importance of investigating history to discover solid facts and differentiate them from the myths. Read about this at my dad's page about Ethiopia.

Now the capital of the Amhara region 3 is Bahir Dar. Gonder, Begemder, Gojjam and Lasta were the provinces that existed during the imperial era.

However, the history of the capital city of Gonder in mythology goes back much further, as such mythologies could claim.

The following lines are about this city, the recent climate change it faces and some historical points. If you have any comment, or if you want to write about any other beautiful sites in Ethiopia, please use the form on the bottom of the page to write it. Thanks.

This is also an invitation for Ethiopian people to write about any city in their country. If you had political views, please use the Ethiopian Modern Forums to Write about Ethiopia.

Situated in northwestern Ethiopia north of Lake Tana, the source of the Blue Nile, Gonder emerged during the 17th century as part of the Abyssinian Empire.

It was the capital of Ethiopia from 1635 to 1867. There are some other capitals in every reign such as Shewa, which is also an Amharic capital.

Some sources claim Ethiopia to be one of the world's oldest countries in the world and say it has existed as an independent nation for over 3000 years, except for a brief period from 1936 to 1941, when the Italian fascist, Mussolini, occupied it.

According to the myth of the royal dynasty, the royal family is able to trace its lineage all the way back to the Queen of Sheba and King Solomon.

The hereditary rulers called themselves the Solomonic Emperors of Ethiopia, a line unbroken until the reign of the last Emperor, Haile Selassie 1.

However, during a history of civil wars between different emperors in the north (Tigray) and the Amharic regions, the influence of the European colonialism has streamlined the political power and played the main role to help the last emperor, Haile Selassie 1 maintain his system.

The Ethiopian revolutionary people deposed the late emperor in 1974, when the students of the universities engaged in hard struggle to oust the imperial regime.

But, the army stole the revolution and changed it unfortunately to dictatorship, instead of streaming the line of the people by whom they believed to be revolutionary socialists in Ethiopia.

However, both of them have changed to autocratic systems, since the two main characters remain in power in both, Eritrea and Ethiopia since 1991 for a long time.

Please read more about those political events on the links above, since this page is only about Gondar.

The earliest human remains in East Africa ever found were excavated in the area of Gondar. Scientists believe Homo sapiens (modern humans) migrated from Africa and some of them say from Ethiopia, and first walked out into the world around 150,000 years ago.

The old royal castle in Gondar remains one of Ethiopia's main tourist attractions. Today, Gondar as a modern university town, with its 200,000 inhabitants is the biggest city in the populous Amhara region.

There are more than 17 million inhabitants living in the entire area as smallholder farmers of cattle, sheep, goats and poultry. The population in Ethiopia reaches more than 82 million in the 2009 estimates.

The highland areas are located at altitudes between 1,500 and 2,500 meters above sea level so the climate is fairly cool for this part of Africa.

It has kept most of the population safe from Ethiopia's most threatening disease, malaria, which kills 160,000 Ethiopians in lowland areas every year, and infects millions of people.

The temperature is expected to rise and the precipitation to increase in the northern highlands. If this happens, it will cause the mosquitoes that transmit malaria to seek new breeding grounds in the high altitude area of the Amhara region and other highland regions, spreading the disease to millions of people.

Environmentalist expectations tell us that between 2050 and 2080, the highlands of Amhara region and the East African highlands as a whole could become a high-risk areas for malaria with a consequent significant loss of life and economic damages.

With the absence of good oriented environmental and health programs, the disasters could be worse.

If you want to write about Gondar or any other beautiful places in Ethiopia, please use the form below. However, to write about politics, culture or economy, or other relevant articles to these topics go to the links at the political site above. Thanks.

The Story of My Life Ended in Gondar!

It all started when I was born, my mother was a single mother who was raped at age 16. She then gave birth to me at a hospital downtown St. Louis when …

Everything about Gondar and Ethiopia at Amazon!

You can also enjoy more activities here if you liked this page about Gondar in Ethiopia. Please share it with your services through the buttons here, at the left column of the page and at the bottom of the page.

Use the small buttons at the top left column to subscribe to feeds from Gondar and receive them on your computer. Alternatively subscribe to the feeds through your accounts at Yahoo, Google, Bing or others.

Use the other small buttons at the right column to tweet Gondar, follow, or pin the pictures.

I use "Solo Build It" tools at the bar below and other images to empower this page about Gondar in Ethiopia and the entire 100 Beautiful Sites in the World. Thanks to those strong website building and optimizing tools.

Comments on Gondar appear at the second section of the page below the comments form. If you did not comment until this moment, please use the form to do that and upload pictures. Thanks.