Have You Been at the Beautiful Naxos Island?

The legends in the Greek mythology give the Beautiful Naxos Island inspiring pictures that reflect on the social lives of Naxian in the way they consume the wines, their island produces.

This concept has always been the inspiring factor for arts and literature. Naxos in the Greek legends is the island of love, where love has been broken and relieved.

It has also been the island of wine, where the "Naxian wine has long been considered a fine antidote for a broken heart" (Greek Islands - Traveller's Guide - Greece - Order it from this link and read the Useful Resources section for more resources).

However, people not only in Naxos, but also elsewhere consume wine as (antidote for the broken heart) and for the (fed up) and others who experience any kind of hard situation or just for those who want to attract some romantic pleasures.

You may know in some other cultures that the wine retains courage to weak people who lack courage and retain happiness to those who live in miserable situations.

If you knew more information about Naxian wines, or perhaps about this legend or about Naxos, please do bring them in the house through the form below. Thanks. 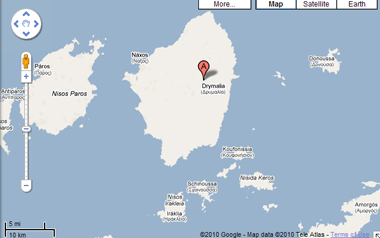 The Legend and the reality seem so embracing and embodying each other in the Beautiful Naxos Island. The legend says the mother of Zeus, the god of the sky and weather raised him in a cave in Naxos.

In Tragea, you can see the other islands in the neighbourhood from the highest mountain in the Cyclades, Mount Zeus or Zefs or Zas, where Zeus was raised as the legend tells.

It was home to the God of wine, Dionysus or Bacchus. As the legend says, Theseus left Ariadne, his sweetheart, after she had helped him in Crete and saved his life and then Dionysus married her. Read more at the end of the article.

In reality, Naxos Island was the birthplace of Petros Protopapadakis who served as the Prime Minister in Greece in 1921. He was born there in 1854 and he has statue there. Michael Damiralis who has translated Shakespeare into Greek has also a statue in Naxos.

The Beautiful Naxos Island covers 429 square kilometres in the central Cyclades group of islands on the Aegean Sea.

The island lies about 200 kilometres southeast of Athens. There are 18, 188 inhabitants in the island.

Out of this number, 6,099 people live in Drymalia Municipality east of the central part of Naxos in an area of 117 square miles.

The rest, about 12, 089 people live in the municipality of Naxos, the archaic centre of the Cyclades culture west of the central part of Naxos in an area of 49 square miles.

Naxos City or Hora (Chora) at the west coast is the capital and port of the island. The city comprises mainly two parts, the Burgos where the Greek live and Kastro, where the Venetian Catholics live.

Naxos fell under the occupation of the Venetian in 1207 and Marco Sanudo of Venice built Kastro as his capital in the port area and made the island the seat of his dukedom. This area is home to many Venetian mansions.

This historical event could explain that the term of the Italian Aegean Islands used during the Italian-Turkish war in 1912 is not a term limited to the 20th century, but it began in the 13 century.

In this area of the port and onward in the city, the Metropolis exists from the 18th century and appears among several churches.

The Metropolis Museum is open since 1999 in the Orthodox Cathedral Square to exhibit remains from the ancient times such as the remains of a Mycenaean city from the 13th-11th century with ancient buildings discovered during the excavations in Grotta area of Naxos town.

There are two other museums, the Della Rocca Barozzi Venetian Museum and the Archaeological Museum, which has been built in Kastro during the Frankish era in the 14th century in addition to the Naxos Cultural Centre.

Beautiful Naxos Island is mountainous and there are some valleys that run below the heights on a fertile land. Different plants such as grapes, citrus fruit, figs, olives, potatoes and corn cover this fertile land.

Planes, catamarans and ferries connect the Beautiful Naxos Island with the ports of Thessaloniki, Iraklia, Piraeus in Greece and with other islands in the neighbourhood.

Additionally, this map also has several full color photographs of scenic areas. Placenames in both Roman and Greek alphabet. Legend is in Greek, German, English, Italian.

Describes the best and oldest walking trails. It includes detailed maps, exact times, GPS points and colour photographs of outstanding places - and lots of information about the "islands of light".

Olive groves, forsaken monasteries, the scent of thyme, sleepy villages, Byzantine chapels, secluded coves, there is much to be discovered on the Cyclades.

You can share this page about the Beautiful Island of Naxos with your social bookmark through the small buttons. You can also forward it to your friends. Thanks.

Beautiful Naxos Beaches! Not rated yet
The long sandy beaches in Naxos are signs of natural beauty. The natural beauty breathes on the natural view around the coasts of Naxos. Most of Naxos …

Naxos Colours the Greek Mythology! Not rated yet
Minos was a king in Crete. The mythology says when the God Poseidon got angry of King Minos he decided to punch him. Therefore, he induced King Minos' …

Discover the Legends and the Realities in the Beautiful Naxos Island!

Please continue at the links provided here. This section comprises additional lines to some paragraphs in the main article.

Any comments or articles you will write in the form above will also appear here.

Solo Build It on the image bar at the bottom empowers Beautiful Naxos Island and the entire 100 Beautiful Sites in the World.