Kordofan occupies almost the heart of Sudan. It is one of the beautiful sites in central Sudan. Before the recent military, religious  regime came to power, Kordofan was a province in the near west of Sudan (it is central in most sources) that touches the White Nile and spreads west to border Darfur province, with the Nuba Mountains in the southeast. 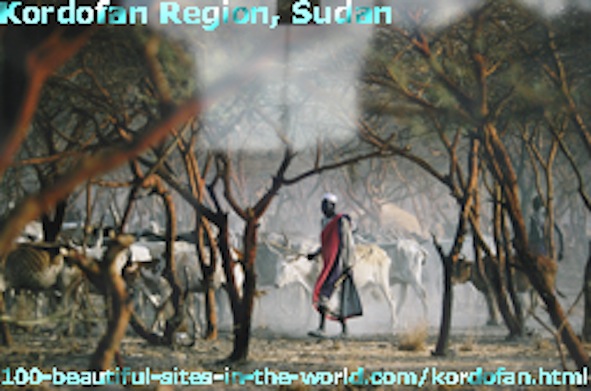 Now in recent days, this regime divided all the provinces of the country and Kurdufan was affected by division, when the regime divided it in 1994 into three new federal states such as North Kurdufan, South Kurdufan and West Kurdufan.

This page covers Kordofan and the production of the Arabic gum, the precious glue of the province. If you knew more about this area in Sudan, please use the form on this page to write about it. Thanks.

This is also an invitation for Kordofanian to write about their province. However, if you wanted to write about political topics, link to my dad's website at the two links above.

Kurdufan province was once again affected by dividing West Kordofan between North Kurdufan and South Kurdufan in the year 2005, when the implementation of the Comprehensive Peace Agreement between the Sudanese dictatorial regimes and the Sudanese People's Liberation Movement (SPLM) entered into execution.

They performed well for Kordofan and enriched the Sudanese music by the rhythm of their province, combined with their traditions, customs and the richness of the nature.

The area is just desert in the dry season and it becomes fertile in the autumn from June to September. Although the province produces some crops like cotton, groundnut and millet, but it is known for its mass production of the Arabic gum.

It is well known that Sudan is the biggest African country. It is the world's largest single producer of the renowned natural Arabic gum too.

A thick belt of hashab trees (Acacia Senegal), from which the gum is extracted, stretches from one end of the country to the other and supports both small-scale farmers and the Sudanese economy as a whole.

The Arabic gum was an essential ingredient in the mummification process in ancient Egypt. They used it to preserve paintings before biblical times.

The Kordofan Gum, but Not the Arabic Gum!

Today Kordofan gum is still a treasured commodity that regarded as something of a panacea. Many sources call it the Arabic gum, although it is not. It is Kurdofan gum.

It is a natural emulsifier with the same properties as glue, and it is yet edible by humans and highly soluble in water. In soft drinks, it prevents the colour from separating and the sugar from precipitating.

It holds the ingredients in medicines together in the same way. In newspapers, multiple layers of gum serve as a protective film that keeps the print consistent and permanent.

Sudan's small-scale farmers benefit from major global demands. They tap the amber-coloured gum by cutting holes into the bark. They send the raw sap to Europe to be processed and sold.

However, in the last decades, exports of Arabic gum have fallen dramatically, particularly because of the humanitarian deterioration caused by Darfur crisis, which has damaged the reputation of Sudan and had a negative impact on all exports.

Global climate change is also contributing to the decline in Sudan's exports of Arabic gum. Over the past 50 years, Sudan has experienced lower than average rainfall, drought and rising temperature.

This has made serious negative impact on the hashab-forests, affecting Kordofan gum / Arabic gum production and the lives of millions of Sudanese people.

Besides being important revenue, wedge of hashab-forests improves the fertility of the soil and reduces wind erosion at the same time.

In the future, the temperature will rise even more, and rainfall trends are unclear. Therefore, the prospects for the Arabic gum forests are uncertain.

Any further loss of forest and income would threaten livelihoods and exacerbate the already existing conflicts in the region.

Have you been attracted by the precious glow of Kordofan? Did you know more information about the area? Please, use the following form and contribute to this page. You can upload pictures from Kordofan too. Thanks.

In addition link to more than 100 beautiful sites in Africa from the links in this main column, or the links at the right column. Like, tweet, follow, or pin the pictures. Thanks.

You can do more things here if you have enjoyed reading this page about Kordofan in Sudan, or any of the 100 beautiful sights in Africa.

Comments on Kordofan appear at the second section of the pages above this paragraph and below the comments form.