Amman Grows from Water Not from Oil!

In Amman, water but not oil should be the necessary source for living. Water not oil is in fact the most important natural resource in the world.

The capital city of Jordan lives in constant pressures recently and possibly in the future, to solve water problems. The city could face these problems in the long run since it is getting bigger year after year.

This is because of increasing numbers of farmers leaving their farms to the city to change from agriculture to trading and other businesses and enjoy the urban life. 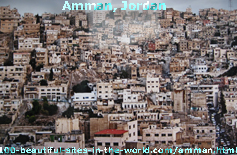 In spite of this fact, the authority in Jordan National Resources, concentrate on oil to drink instead of water, perhaps!

The following lines are about water needs, water disputes and right to water in Jordan. If you have any comment, or if you just want to write about this issue and other things in the capital city of Jordan, feel free to use the form on the bottom of the page to write it. Thanks.

This is also an invitation for Jordanians to write about any city in their country.

Over three million people, or about half of Jordan's population is concentrated in the capital city, Amman. The city is ideally located on a series of hills between the desert and the fertile Jordan Valley below it, where Jordan River runs to supply the capital city of Jordan with drinking water.

Dwellings cling to the hillsides of east Amman, the oldest part of the city, clustered together with small shops and bazaars. In the past decades, the capital city of Jordan experienced a tremendous population growth and new buildings and districts have sprung up.

This happened partly due to the arrival of refugees from Iraq, the disputed Palestinian territories and due to inward migration from rural areas of Jordan as well.

Every drop of water is precious in Jordan. 80% of the country is desert, making it one of the world's ten driest nations. Yet agriculture is the main source of employment and income in the poorest rural areas, where vegetables, wheat and barley grow on small farms, usually run by families.

The Jordan River, which flows into the Dead Sea, is the only river system in Jordan and is vitally important resource of water. However, water is always a controversial issue in Jordan.

On one hand, the citizens' growing needs for drinking water in the city and the peasants' needs of water for irrigation to their crops should be addressed. One the other hand there are constant disputes and claims concerning the right to scarce water supplies between three parties in the area.

Water rights are the cause of strife between Jordan and Israel on opposite sides of the river, as well as the Palestinian state on the West Bank.

In recent decades, the flow of water in the Jordan River decreased considerably due to a combination of human over-exploitation and climate change. This explains partly why the water level of the Dead Sea is plummeting by a metre a year.

According to some observations, this situation is getting hard for the city to handle and for the country to manage. Observatory notes say, the soil in the Jordan Valley becomes less fertile, an increasing number of peasants migrate to the Amman and other cities, while agricultural land turns into desert.

With the expected rise in temperature and decrease in precipitation, water shortages will continue to fuel tension in the region, increase immigration to Amman and put further pressure on the city's water supply.

Well, now you have two options to share your point of view. You can comment about the necessity of water in Jordan or write about Amman or any other city in Jordan. To do that, please use the following form and contribute to this page.

Please NOTE that it is always good to enter a good title such as Many Tourist Attractions in Amman, write short sentences in short paragraphs, upload a picture, describe it, and enter your email address for the system to notify you of replies to your entry. Thanks.

You can also enjoy more ativities here if you liked this page about Amman, the capital city of Jordan. Please share it with your services through the buttons here, at the left column of the page and at the bottom of the page.

For Amman movies and other worldwide movies, see TVCinemaApp.com.

I use "Solo Build It" tools at the bar below to empower this page about Amman, the capital city of Jordan and the entire 100 Beautiful Sites in the World. Thanks to those strong website building and optimizing tools.