The Beautiful Paros Island is one of the the most populated islands in the Cyclades group of the Aegean Greek Islands that take this name because they form a circle around Delos Island, one of the ancient beautiful sites in the world.

From the port in the capital city of Parikia, the Beautiful Paros Island rises on the slopes up to the Mountain of Profitis Ilias (Prophet Elias).

It is about 200 kilometres southeast of Athens and 193 kilometres from the Port of Piraeus in the main Greek land.

The airport is near the village of Voutakos Agheria about 10.9 kilometres form the capital city and it takes 20 minutes.

Flights from Athens to the beautiful Paros Island take 45 minutes.

Paros is in the centre of the Cyclades group of islands covering 209 (196.3) square kilometres and there are 12,853 inhabitants in this beautiflul Island of Paros.

The beautiful Antiparos Isle is very near to Paros at the about southwest and it takes 33 minutes by ferries from Parikia to Andiparos and 23 minutes from Pounta to Andiparos.

The length of the island from Lagkeri in the north to Aghios Ioannis at the south is 30.7 kilometres, so the length of Paros could reach 32 kilometres.

The width from Piso Livadi at the eastern coast to Parasporos at the western coast is 20 kilometres. Since the road is somehow wriggled, so the direct distance or the width is between 16-18 kilometres.

The Beautiful Paros Island is known for its marble since the Byzantine era. Schist and gneiss are found now in few places.

The marble quarry in Marathi is a sign from the ancient times when the marble trade flourished in the past. The Mycenaean Acropolis in Kolimbithres has also other signs of marble.


The Greeks used it in their ancient sculpture and architecture and there are marble in the ancient marble quarries in Lefkes and Calpaki caves in Dryos.

The Statue of Gorgo in the Archaeological Museum in Parikia was made of marble. The tomb of Napoleon and the statue of Aphrodite of Milos known as Venus of Milos or Venus de Milo were made of marble.

The statue of the Greek goddess of love and beauty was discovered in Milos Island in 1820. Alexandros of Antioch carved it either on 130 BC or 100 BC. Its arms and original plinth have been lost. It is at the Louvre Museum in Paris.

Here is a small copy of it, I acquired from a local sculpture market. 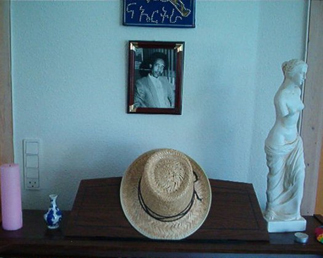 If you had been in the beautiful Paros Island, please tell us how many days you had been there, where you had stayed, which place you had seen and all in all, how did you spend your time?


Have A Great Story About Some Beautiful Sites in the World?

You can share beautiful Paros Island with your social media through the small buttons on this page. Thanks.

"Solo Build It" at the image bar at the bottom of beautiful Paros Island empowers the entire 100 Beautiful Sites in the World.