If You Have Not Seen the Yangtze River, You have Not Been Anywhere!

"If you have not travelled up along the mighty Yangtze River, you have not been anywhere!" (Chinese proverb).

During the nineties and lately after that, while carrying my job as journalist following international news, I had been surprised by the American official pressures on China to open the market even for the American rice.

China is well known as the top producer of rice in the world if not the source of this valuable crop. I followed understandingly, the rise of anger among the Chinese peasants and wrote some articles about the American rice and the Chinese rice under the title "War of Rice" supporting the right cause.

However, the following lines are not about politics. They are only about the great Yangtze River as the home of the rice and the gateway of China. In addition, they are about the economic and the environmental threats that are caused by the global climate change.

If you have more information about any city or any place in China, please use the form at the bottom of the page to write it. Thanks. 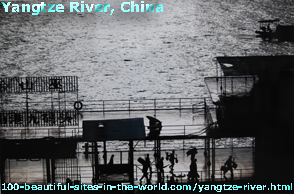 Why Chinese say, you have not been anywhere, if you have not travelled up along the mighty Yangtze River? They could be right, since the Yangtze is China's golden gate and the world source of rice.

The Yangtze, called also Chang Jiang, runs and deepens its way from the Tibetan plateau through several Chinese provinces before it flows into the East China Sea.

Chang Jiang runs through 6300 kilometres, which makes it the longest river in Asia. It is surpassed globally only by the Amazon River in South America and the Nile in northeastern Africa.

Running through heights and valleys, the winding Yangtze River (Chang Jiang) has created some of China's most stunning landscapes. The deep valleys and hills dressed in green and steep cliffs that cut through the Yangtze muddy water, create a breathtaking sight that culminates with the dramatic beauty of the famous three ravines.

The first rice cultivation took place around 8,000 years ago in the middle and lower regions of the Yangtze River, where the climate is quite hot and humid.

Today, the agricultural areas of the Yangtze produce almost half of the total volume of crop in China. In total, China accounts for about one third of the world rice production.

Yangtze supplies roughly around 500 million people with fresh water and the river sustains cities like Shanghai and Nanjing.

In addition to this vital water supply, the Yangtze River is very important as it serves as a transportation highway for millennia, and is known as the "Golden Gate" that connects the eastern and western China.

Because of the diminishing of the Tibetan glaciers, the flow of the mighty Yangtze (Chang Jiang) may shrink during the dry season in the future. At the end of the 21st century, it is projected that the glaciers, which feed the Yangtze, will have decrease by more than 60%.

This will reduce the availability of fresh water supplies throughout the year in large parts of the Republic of China and will surely have immense human, ecological and economic costs.

Rice yields are expected to drop considerably, which will not only affect the Chinese people, but will also affect the entire world's food supply.

You can comment on this page about Yangtze River, or Chang Jiang, the gateway of China or write about any other beautiful sites located along the river.

To do this, please use the following form and contribute to this page. Thanks.

You can also enjoy more activities here if you liked this page about Yangtze River or Chang Jiang the gateway of China. Please share it with your services through the buttons here, at the left column of the page and at the bottom of the page.

I use "Solo Build It" tools at the bar below to empower this page about Yangtze River, or Chang Jiang, the gateway of China and the entire 100 Beautiful Sites in the World. Thanks to those strong website building and optimizing tools.