Did You Know How the Beautiful Chicago City Rose from the Fire? 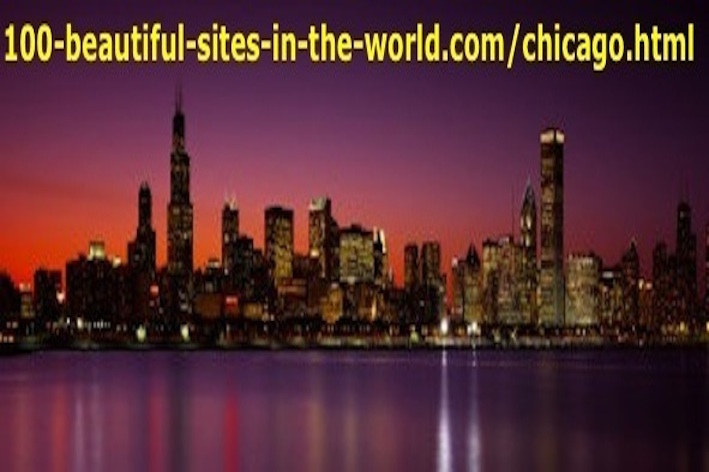 It took its name from the Algonquian, which is one of the native American language groups in North America. I read somewhere, Algonquian is also known as Algonkian.

Did you know the source of the second name and why the "qu" has been changed into "k"? Use the comments form to write about that. Thanks.

The Backgrounds of the Beautiful City of Chicago!

The Algonquian people were divided into hundreds of tribes and they spoke several Algonquian dialects of this language group.

The word Chicago in that language means "strong smell" and that strong smell did not come from flowers, but from onions. The Native Americans lived on the shores of Lake Michigan and grew onions on that area and beyond before the birth of the beautiful Chicago City.

They continued to live there in love and peace until the year 1673. Then one of the adventurous investors and mapmakers later called Louis Joliet reached the area on one of his tours.

He was joined by the French jesuit monk, Jacques Marquette, when he reached the area of the beautiful Chicago City before the area was known by this name.

The Jesuit in definition is a member of a religious society for males created in 1534 by the Roman Catholic Ignatius Loyola, one of the Spanish knights. Read more about the knights in some of the Beautiful Greek Islands here.

He came from a Basque family and worked as priest since 1537. He became theologian, founded the society and became its superior general. He was seriously wounded in the battle of Pamplona.

He came back to his mind while he was in medical treatments. He read De Vita Christi or Life of Christ by the German Roman Catholic theologian, Ludolphus de Saxonia who lived during 1300-1378.

Ludolphus de Saxonia inspired him to quit his military and devote himself to God. He was declared patron of spiritual retreats by Pope Pius XI in 1922.

Thousands of colonists started to arrive after him. The colonists waged wars accompanied by horrific genocides killing about twelve million Native Americans in North America.

Describing these events that seemingly have been cries of the wind in the Native American history, Alaa Al Aswany started the first chapter of his novel, "Chicago" by five pages and wrote about the city some terrific historical facts.

He said in his first chapter, "Anyone reading American history must pause at this paradox: the white colonists who killed millions of Indians and stole their land and other possessions were, at the same time, extremely religious Christians.

But, this paradox is resolved once we learn about the prevalent views in that era. Many white colonists believed that American Indians, even though they were, somehow, God's creatures, were not created in the spirit of Christ but rather in another imperfect and evil spirit."

In 1837, the city of Chicago integrated with the other obtained cities and since then it began to grow faster.

It became important city because of its location on Lake Michigan and its huge pasture. In addition, the railways added to it more values to become the most important city in the American west.

But, the City of Chicago witnessed some horror acts following a tragical accident made by only one cow. That cow was one of Mrs O'leary's cows.

The cow burned most of the wooden buildings in the city. More than three hundred citizens were killed and a hundred thousand became homeless. The total cost was evaluated that time by two hundred million dollars.

Unbelievable! How could a cow do that?

While all of the city was caught on fire for two days, many robbery gangs came from the surroundings to loot most of the properties of the houses, the banks and the stores. They killed many people on the streets and abducted and raped women.

Chicagoan did not know what to do during that horrible moment in the history of the beautiful Chicago City. Everybody was taken completely by it and living in real misery.

People began to gather in the churches and some priests began to speak of the destruction of the city as punishment from God because of some sinful acts like adultery that has engulfed the city.

During one of the gatherings and while Chicagoan were trembling by the catastrophe and the tragedy, one of its people, a merchant called John Wright, who has never been known of brilliant speech, found himself driven to present an operatic act, he himself and the other citizens were never thought possible.

He shouted loud in the crowds, some words that became a prophecy, "Courage, men! Chicago did not burn, it entered the fire to get rid of its bad elements and will come out stronger and more beautiful than it has been."

Those words have been a strong motive for Chicagoan to rebuild the nowadays prosperous Chicago City, more beautiful than it has never been.

The council of the city prohibited building the wooden houses again. Hard efforts including donations and volunteering have been made by sincere Chicagoan to rebuild the city.

However, during the reconstruction of the city and the rehabilitation of its people, the labor wages went down because of the influx of many outsiders and thus the American capitalism began to prosper.

The poverty increased and many hungry citizens could not afford the rent of the modern houses, so many of them remained on the streets.

As such misery continued, the people thundered in violent demonstrations on the streets calling for "Bread or Death".

Well, I want you kindly to fill this section of the page. If you were Chicagoan, or if you knew about this great city, write about it and upload pictures from it. Thanks. You can continue at Chicago here.

After more than a century, the beautiful Chicago City is now the third largest and populous city in the State of Illinois, in the United States with over 2.7 million residents. It is a major American center of industry, commerce and culture.

A firefighting academy has been built in the place of Mrs O'leary's house in the old part of the beautiful Chicago City to fight fires in the "Windy City", where the strong winds cause the flames to spread and burn large areas.

Many names have been given to the beautiful Chicago City to describe it, such as "City of the Big Shoulders", "Queen of the West", "City of Neighborhood", "City of the Century", "City of I Will" and the "Windy City".

I call it the city of the gifted novelist Richard Wright.

Did you find this page about the beautiful Chicago City useful? If so, "like" and "tweet" it using the small buttons at the top of the right column, at the top of the left column and at the bottom of the page. Thanks.

Know more about the beautiful Chicago City? If so, please use the comments form to write it and get many gifts for doing so. Consider this tip: Write about the most interesting place in the city about 500 words, or more in short sentences and short paragraphs.